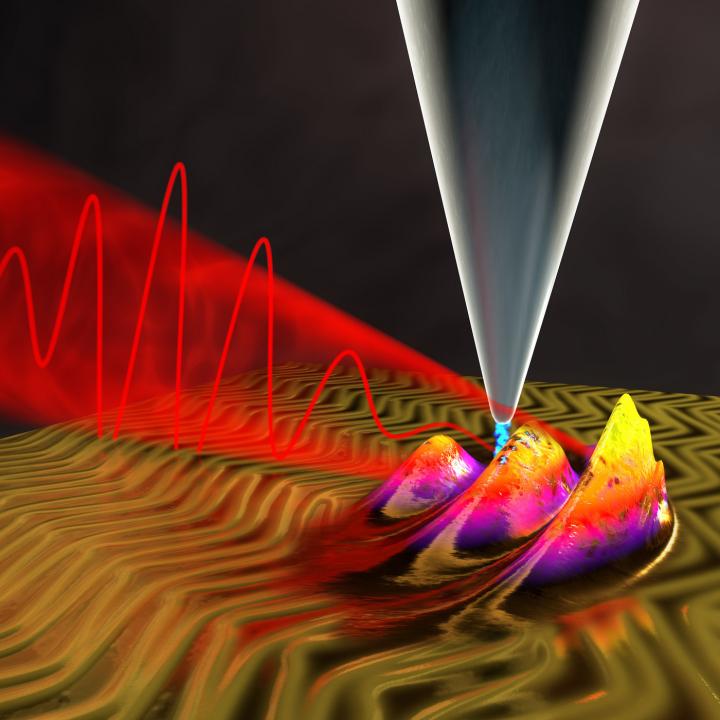 The operation of components for future computers can now be filmed in HD quality, so to speak. Manish Garg and Klaus Kern, researchers at the Max Planck Institute for Solid State Research in Stuttgart, have developed a microscope for the extremely fast processes that take place on the quantum scale. This microscope – a sort of HD camera for the quantum world – allows the precise tracking of electron movements down to the individual atom. It should therefore provide useful insights when it comes to developing extremely fast and extremely small electronic components, for example.

The processes taking place in the quantum world represent a challenge for even the most experienced of physicists. For example, the things taking place inside the increasingly powerful components of computers or smartphones not only happen extremely quickly but also within an ever-smaller space. When it comes to analysing these processes and optimising transistors, for example, videos of the electrons would be of great benefit to physicists. To achieve this, researchers need a high-speed camera that exposes each frame of this “electron video” for just a few hundred attoseconds. An attosecond is a billionth of a billionth of a second; in that time, light can only travel the length of a water molecule. For a number of years, physicists have used laser pulses of a sufficiently short length as an attosecond camera.

In the past, however, an attosecond image delivered only a snapshot of an electron against what was essentially a blurred background. Now, thanks to the work of Klaus Kern, Director at the Max Planck Institute for Solid State Research, and Manish Garg, a scientist in Kern’s Department, researchers can now also identify precisely where the filmed electron is located down to the individual atom.

To do this, the two physicists use ultrashort laser pulses in conjunction with a scanning tunnelling microscope. The latter achieves atomic-scale resolution by scanning a surface with a tip that itself is ideally made up of just a single atom. Electrons tunnel between the tip and the surface – that is, they cross the intervening space even though they actually don’t have enough energy to do so. As the effectiveness of this tunnelling process depends strongly on the distance the electrons have to travel, it can be used to measure the space between the tip and a sample and therefore to depict even individual atoms and molecules on a surface. Until now, however, scanning tunnelling microscopes did not achieve sufficient temporal resolution to track electrons.

“By combining a scanning tunnelling microscope with ultrafast pulses, it was easy to use the advantages of the two methods to compensate for their respective disadvantages,” says Manish Garg. The researchers fire these extremely short pulses of light at the microscope tip – which is positioned with atomic precision – to trigger the tunnelling process. As a result, this high-speed camera for the quantum world can now also achieve HD resolution.

Paving the way for light-wave electronics, which is millions of times faster

With the new technique, physicists can now measure exactly where electrons are at a specific time down to the individual atom and to an accuracy of a few hundred attoseconds. For example, this can be used in molecules that have had an electron catapulted out of them by a high-energy pulse of light, leading the remaining negative charge carriers to rearrange themselves and possibly causing the molecule to enter into a chemical reaction with another molecule. “Filming electrons in molecules live, and on their natural spatial and temporal scale, is vital in order to understand chemical reactivity, for example, and the conversion of light energy within charged particles, such as electrons or ions,” says Klaus Kern, Director at the Max Planck Institute for Solid State Research.

Moreover, the technique not only allows researchers to track the path of electrons through the processors and chips of the future, but can also lead to a dramatic acceleration of the charge carriers: “In today’s computers, electrons oscillate at a frequency of a billion hertz,” says Klaus Kern. “Using ultrashort light pulses, it may be possible to increase their frequency to a trillion hertz.” With this turbo booster for light waves, researchers could clear the way for light-wave electronics, which is millions of times faster than current computers. Therefore, the ultrafast microscope not only films processes in the quantum world, but also acts as the Director by interfering with these processes.

Chemical evidence shows how a dwarf galaxy contributes to growth of…