An invasive flatworm from Argentina, Obama nungara, found across France and Europe 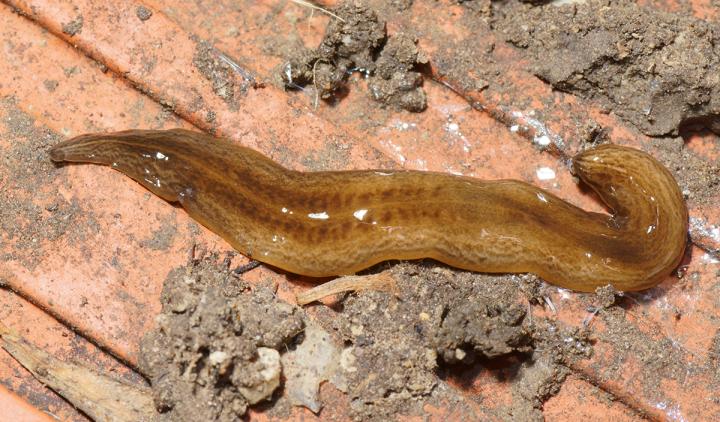 One of the consequences of globalization is the inadvertent human-mediated spread of invasive species. The presence of a new invader, named Obama nungara, is reported in France by an international team led by Jean-Lou Justine of ISYEB (Muséum National d’Histoire Naturelle, Paris, France). This is the first study of this invasion, reported in an article published in the open-access journal PeerJ.

As is the case for other land planarians including the New Guinea flatworm, Platydemus manokwari, and giant hammerhead flatworms from Asia, already reported in France, the origin of the invasion by O. nungara is likely to be via the international trade of plants, since adult planarians and cocoons can easily travel in potted plants. However, in contrast to the previously recorded species of land planarians that have been found only in a limited part of the country, the flatworm Obama nungara is reported from an area representing three quarters of metropolitan France.

Land flatworms are predators of soil animals, including earthworms and molluscs, and thus are a possible threat to the biodiversity of native animals and to soil ecology, although the ecological impact has yet to be studied.

To date, the presence of Obama nungara has been occasionally recorded from several countries in Europe, including Spain, Portugal, UK, Italy, and Belgium. However, in none of these countries has a study of the extent of the occurrence of O. nungara been performed.

Observations in France, mainly based on citizen science, include 530 verified records received from 2013 to 2018. Results show that the species is now present in 72 of the 96 Departments of Metropolitan France, an area representing 75% of the country. The species is especially abundant in gardens along the Atlantic coast and the Mediterranean coast. The species has also been recorded on Corsica in the Mediterranean Sea. Most records were from a low altitude, and there are no records of the species from mountainous regions such as the Alps, Pyrenees and Massif Central. New records from Italy and Switzerland are also included in the study.

Molecular studies, based on the Cytochrome Oxidase Type 1 sequences, show that Obama nungara has three populations: two in Argentina and one in Brazil. Only one of these populations, “Argentina 1” in the paper, is present in Europe, including all France, and Spain, Portugal, UK, Italy, Belgium, and Switzerland. The population from Brazil has not reached Europe; Argentina is the sole source of this invasive species in Europe.

The extensive distribution of the species and its reported local abundance, combined with its predatory character, make Obama nungara a potential threat to the biodiversity and ecology of the soils in Europe. The authors estimate that O. nungara is the most threatening species of all invasive land planarians present in Europe.

In a climate of open science, the database of citizen science records and the molecular matrix are made public together with the paper. The authors mention that citizen science was extremely useful for evaluating the invasion, but urge to consider possible bias in the records, due to media coverage. Mention of land flatworms in the media immediately produced bursts of records, therefore hampering a correct analysis of the abundance of the species over time. It is expected that this new paper will encourage new records of Obama nungara from members of the public, not only in France but possibly other countries.

PeerJ is an Open Access publisher of seven peer-reviewed journals covering biology, environmental sciences, computer sciences, and chemistry. With an emphasis on high-quality and efficient peer review, PeerJ‘s mission is to help the world efficiently publish its knowledge. All works published by PeerJ are Open Access and published using a Creative Commons license (CC-BY 4.0). PeerJ is based in San Diego, CA and the UK and can be accessed at peerj.com

Across its journals, PeerJ has an Editorial Board of over 2,000 respected academics, including 5 Nobel Laureates. PeerJ was the recipient of the 2013 ALPSP Award for Publishing Innovation.

Energy choices can be contagious — but why?