An ‘instruction’ to the crocodylian skull

Scientists from St Petersburg University described for the first time all structures in the animal’s braincase, having studied more than 70 of their 3D models 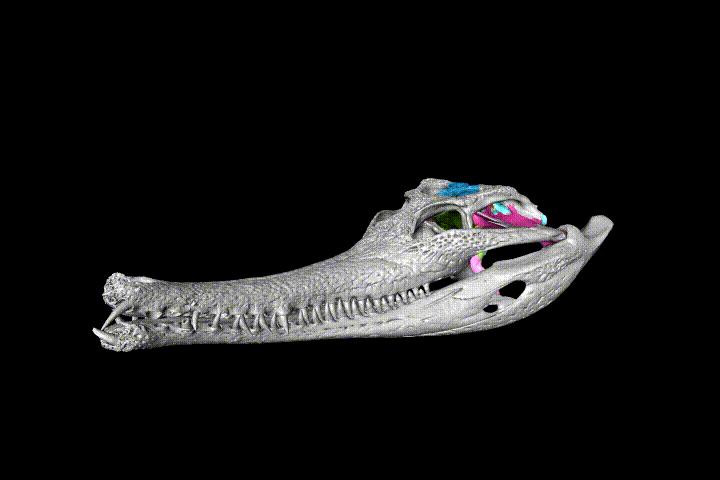 The braincase of crocodylians has a distinctive structure. Unlike evolutionary relatives (birds and squamates), in crocodylians, all braincase bones are rigidly fixed together and form an akinetic structure. In the process of evolution, this made it possible for animals to develop powerful jaws and stronger bite forces, thanks to which crocodylians could gnaw through the hard shell of crayfish and turtles and hunt fish and land animals, including dinosaurs. As a result, they have managed to fill the niche of predators and survive to the present day.

At present, in comparison with other parts of the crocodylian skull, the structure of their braincase has been understudied. This is because, until recently, scientists did not have the opportunity to investigate the complicated akinetic structure so that in the end the valuable collection specimen remained intact. At the same time, there is confusion in the already known data in terms and names. This complicates the work of many researchers studying the evolution of crocodylians.

Ivan Kuzmin, a doctoral student at St Petersburg University, decided to readdress this situation together with his colleagues from St Petersburg University, the Borissiak Paleontological Institute of the Russian Academy of Sciences, the Research and Practical Clinical Centre for Diagnostics and Telemedicine of the Moscow Department of Health, and the Smithsonian Institution (USA). To achieve this, they used computed tomography and a special 3D visualization program to create and study 3D models of 75 braincases of present-day crocodylians. This made it possible, without damaging the collection samples, to literally disassemble them by the bones and study every detail. Additionally, the researchers analysed academic papers describing the structure of the braincase from the beginning of the 19th century. The earliest work studied was an article dated 1821.

As a result, the scientists compiled a summary table in which they assigned a name to each structure in the crocodylian braincase. ‘Our paper is the first one in which this part of the skull is described in detail and a complete ordered list of all its details is provided. We have introduced some terms, for example, the names of bone processes in the auditory area. In some cases, because the structures were named incorrectly before us, in others, because we have discovered new elements,’ notes Ivan Kuzmin, the main author of the study, Master of Science from St Petersburg University.

While studying 3D models of braincases, the researchers found previously unknown evolutionary features. According to the scientists, recent data can help to better understand the structure of the crocodylian skeleton and resolve the contradictions around the genealogical tree of reptiles. The fact is that for almost 30 years, molecular biologists and paleontologists have been unable to agree on the sequence in which crocodylian species should be located on the evolutionary tree. For example, based on gene studies, molecular biologists assume that alligators are the most basal ones, while paleontologists, studying fossil remains, come to the conclusion that the most primitive ones are gharials. ‘In the future, we plan to conduct a phylogenetic analysis and, based on its results, resolve this conflict,’ says Ivan Kuzmin. ‘The initial assumptions show that molecular biologists might be right.’

During the research, the authors also found out through what developmental mechanisms the crocodylian braincase acquired an akinetic structure. The researchers compared the evolution of the braincase in fossil relatives of crocodylians (crocodylomorphs) with the development of the braincase in the embryos of present-day animals. They have found out that in the crocodylian braincase area, in contrast to lizards and birds, complimentary structures appear at the initial stages of ontogenesis.

‘Bones in an embryo are formed in two ways: endochondral and dermal. In the former case, cartilage first appears; then it ossifies. In the latter case, bones are formed as bones initially,’ explains Ivan Kuzmin. ‘Most of the braincase of all animals is formed by the endochondral process. However, it has turned out that everything happens differently in crocodylians. In addition to structures that are formed through endochondral ossification, they have new elements that are formed embryonically in the form of dermal ossifications. That is, new bone blocks that are missing in other animals are attached to the cartilaginous structures, as in the LEGO construction set. With further development of the embryo, cartilages are transformed into bones, and everything merges into a single structure. The same embryonic processes likely happened during the early stages of crocodylomorph evolution.’