Scientists from the Faculty of Physics at the University of Warsaw and the Polish Academy of Sciences used photons to create a spiking neuron, i.e. the basic element of the future photonic neural network processor. The so-called neuromorphic devices, i.e. systems that imitate the behaviour of the biological brain, which researchers are working on, are the future of artificial intelligence, as they allow for much faster and more effective information processing. We can read about the results of their work in the latest “Laser and Photonics Review”. 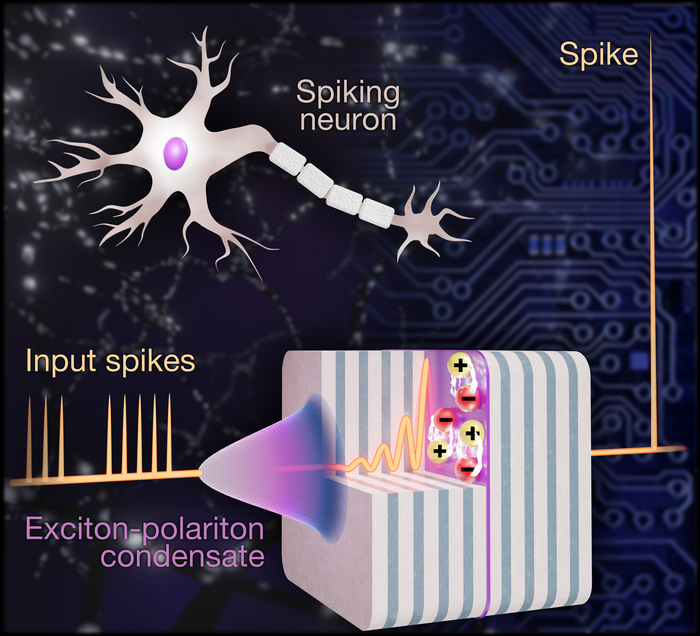 Scientists from the Faculty of Physics at the University of Warsaw and the Polish Academy of Sciences used photons to create a spiking neuron, i.e. the basic element of the future photonic neural network processor. The so-called neuromorphic devices, i.e. systems that imitate the behaviour of the biological brain, which researchers are working on, are the future of artificial intelligence, as they allow for much faster and more effective information processing. We can read about the results of their work in the latest “Laser and Photonics Review”.

Mammalian brains are one of the most complex and efficient systems in the world. Already in the 1990s, neurobiology scientists showed that a single area of the macaque cortex was able to analyze and classify visual patterns in just 30 milliseconds, although each of the neurons involved in this process send less than three messages in the form of electrical pulses. This is made possible by a large number of synapses – the connections between neurons – in the macaque brain’s neural network.

The human brain is a piece of even more powerful machinery. It is made up of 100 billion neurons, each of which creates an average of several thousand connections with other nerve cells. This creates a neural network of approx. 100 trillion connections, thanks to which our brain is capable of recognizing, reasoning, and controlling motion at the same time – it performs trillions of operations per second, using only 20-25 watts of power. By comparison, conventional processors use ten times as much power to recognize just a thousand different types of objects. This stunning difference and the brain’s exceptional performance are due to, among other things, the biochemistry of neurons, the architecture of neural connections, and the biophysics of neural computational algorithms.

The society’s appetite for information is constantly growing, so we need to process this information faster and more comprehensively. Conventional computing systems may not meet the growing demand for more computing power while increasing energy efficiency. The solution to the problem may be the so-called neuromorphic devices that mimic the actions of the biological brain. They are the future of artificial intelligence, as they allow for much faster and more effective processing of information in tasks such as image recognition.

Scientists from the Faculty of Physics at the University of Warsaw and the Polish Academy of Sciences in a paper published in the “Laser and Photonics Review” proposed the use of photons in a way that allows the creation of spiking neural networks. Krzysztof Tyszka from the Faculty of Physics of the University of Warsaw, who is the first author of the work, emphasizes that photonic systems ensure communication at the speed of light, low losses, and low energy consumption. The advantage of photons is that their propagation takes place practically without energy loss. – Unfortunately, because they interact in a relatively weak way, it is difficult to use them to perform computational operations in a manner analogous to electronic systems – adds the scientist.

– In our research, we propose a solution in which photons strongly interact with particles of very low mass, called excitons – explains Barbara Pietka from the Polaritone Laboratory at the Faculty of Physics, University of Warsaw. This strong interaction is possible when the photons and excitons are trapped together in the so-called optical microcavities, which forces repetitive energy exchange between them. This kind of synergy generated in the microcavity between a photon and an exciton is so persistent that physicists call it a quasi-particle and refer to it as excision-polariton (or polariton for short).

Polaritons have unique properties, especially under the right conditions they can show a phase transition into a Bose-Einstein condensate. In a such state, the previously independent multiple polaritons become indistinguishable. – Based on our last experiment, we were the first to notice that when polaritons are excited by laser pulses, they emit light pulses in a way that mimics the spiking of biological neurons – describes Magdalena Furman, Ph.D. student involved in research at the Polariton Laboratory at the Faculty of Physics of the University of Warsaw, This effect is directly related to the Bose-Einstein condensation phenomenon, which either inhibits or enhances the emission of pulses.

Andrzej Opala from the Institute of Physics of the Polish Academy of Sciences, who together with Michal Matuszewski developed the theoretical foundations combining research on polaritons with the LIF model of a neuron (Leaky Integrate-and-Fire model), adds that now the group is working on solving the problem of scalability, i.e. connecting many neurons into a network.  – We propose to use a new computational paradigm based on coding information with pulses that trigger a signal only when it arrives at the neuron successively, at the right time – the researcher explains. Currently, neural networks use layers of interconnected neurons that trigger impulses based on the importance assigned to each connection (in the mathematical description we refer to “weights”). In contrast to this type of solution, in the optical neural network developed by researchers from Poland, described in the journal “Laser and Photonics Review”, the neurons are triggered (i.e. become active) in response to a train of pulses, which may have different intensity and different time intervals. As with biological neurons that are excited by electrical pulses, there is a certain threshold above which this train of pulses reaching the neuron triggers a signal that will be passed on. Polaritons make it possible to imitate a biological system, because only stimulation with the appropriate number of photons, above a certain threshold, leads to the formation of Bose-Einstein condensate, and then emission of a short, picoseconds scale flash which is a signal for the next neuron.

Importantly, the sample, which was used by scientists to trap photons and observe exciton polaritons condensate, was synthesized on-site at the Faculty of Physics of the University of Warsaw, in the group of Wojciech Pacuski. Scientists arranged the atoms of different types of semiconductor crystals layer by layer through a molecular beam epitaxy to create a prototypical photonic neuron. A temperature of 4K (the liquid helium) was required to achieve the Bose-Einstein condensate state. – Our further goal is to transfer the experiment from cryogenic conditions to room temperature – says Jacek Szczytko from the Faculty of Physics, University of Warsaw. – Research is needed on new materials that will allow obtaining Bose-Einstein condensates also at high temperatures. In order for photonic neurons to network, they must be able to transmit signals to each other. Ideally, the transmission direction, i.e. the wiring diagram, could be easily changed as needed.

– Scientists still face new challenges in their research into neuromorphic systems. Our new idea to recreate the spiking of biological neurons in the optical domain can be used to create a network, and then a neuromorphic system in which information is sent by orders of magnitude faster and in a more energy-efficient way compared to existing solutions – concludes Krzysztof Tyszka.

https://www.fuw.edu.pl/faculty-of-physics-home.html
Website of the Faculty of Physics, University of Warsaw

https://www.fuw.edu.pl/press-releases.html
Press service of the Faculty of Physics at the University of Warsaw