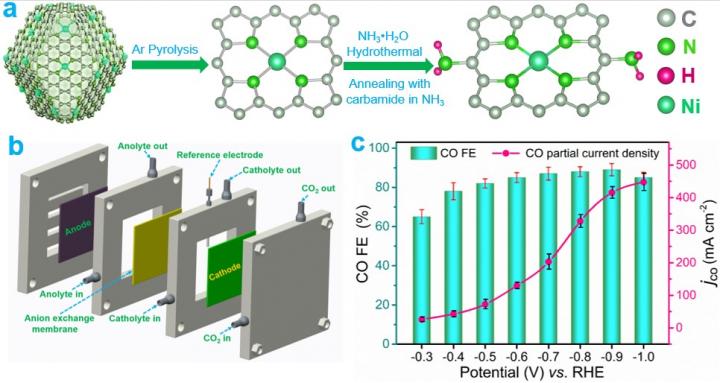 Carbon dioxide (CO2) electrocatalytic reduction driven by renewable electricity can solve the problem of excessive CO2 emissions. Since CO2 is thermodynamically stable, efficient catalysts are needed to reduce the energy consumption in the process.

The single-atom catalysts immobilized on nitrogen-doped carbon supports (M-N/C) have been widely used for CO2 electrocatalytic reduction reaction due to their high atom utilization efficiency.

Recently, a research team led by Prof. LIU Licheng from the Qingdao Institute of Bioenergy and Bioprocess Technology (QIBEBT) of the Chinese Academy of Sciences (CAS) proposed a two-step amination strategy to regulate the electronic structure of M-N/C catalysts (M=Ni, Fe, Zn) and enhance the intrinsic activity of CO2 electrocatalytic reduction.

In the strategy, the M-N4/C was aminated by annealing with carbamide in NH3, impregnation and hydrothermal reaction in ammonia water to synthesize final M-N4/C-NH2 catalysts.

Although M-N/C catalysts are widely used, they demonstrate a poor reaction current density, which is much worse than the current density of industrial level.

In the study, the researchers used gas diffusion electrodes to create a reactive three-phase interface in a flow electrolyzer to increase the current density for CO production to industrial application level.

The aminated Ni single-atom catalyst demonstrated a remarkable current density of >400 mA cm-2 with a nearly 90% Faraday efficiency for CO production, which is 1.8 times of that before amination.

The study, published in Energy & Environmental Science, provides a method for increasing current density at industrial-relevant level of single-atom catalysts.