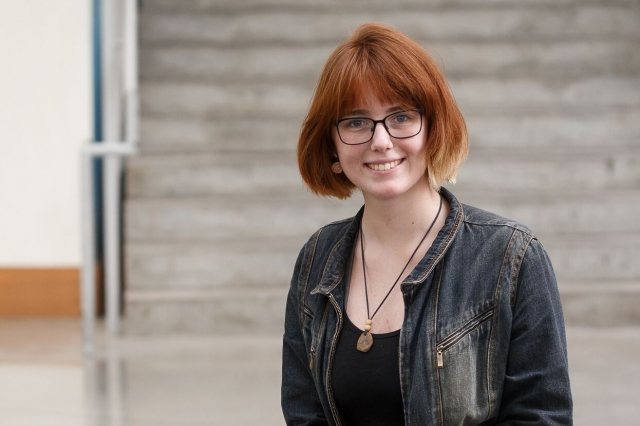 Amelia Trainer can recite the Seamus Heaney poem, “Scaffolding,” by memory. It starts:

Masons, when they start upon a building,
Are careful to test out the scaffolding;

Trainer, a sophomore majoring in physics and nuclear science and engineering, calls “Scaffolding” “probably the most true and meaningful love poem I’ve read.” But its metaphorical take on a relationship might also resonate for Trainer around her work with the Computational Reactor Physics Group (CRPG), where Trainer is deeply committed to learning about strengthening structures in a nuclear realm.

Since early in her freshman year, Trainer has been part of a team helping refine OpenMC Monte Carlo, a powerful computational code for modeling neutron behavior inside nuclear reactors. Developed by the CRPG, with support from the U.S. Department of Energy, OpenMC offers the possibility of “simulations that recreate the world inside a reactor,” Trainer says. “This means we can make operating reactors safer, improve future designs, and avoid doing costly experiments. It’s the coolest thing ever.”

Her engagement with this research has already earned recognition: She won an outstanding Undergraduate Research Opportunity Project (UROP) award, and presented a paper to the American Nuclear Society Student Conference in 2015, all based on work she performed in freshman year.

In OpenMC simulations, scientists are interested in testing a variety of reactor parameters, including operating temperature. But it can be time-consuming to generate simulation data for a large number of nuclides at specific temperatures, and research suggested it might be possible to achieve comparably accurate results by instead interpolating between specific temperatures. Trainer’s research tested this hypothesis by comparing different interpolation models with actual experiments.

“Instead of generating data for nuclear material at 293 kelvins, we could say the data roughly equals some material at 250 K and some at 300 K while preserving accuracy,” Trainer says. “We can save time with a shortcut like this, and make everyone’s life easier.”

Trainer got a running start on this project. “I began pestering Jon Walsh [a PhD candidate working in the CRPG group under the direction of professors Kord Smith and Benoit Forget] with emails looking for a research project before freshman orientation,” she says. “I can’t emphasize how much I like this project and the research group as a whole.”

Given her avid interest in this work, and her double major, it is somewhat surprising to learn that as late as the summer before senior year in high school Trainer was uncertain about attending college. In her Florida high school, some students didn’t bother, and Trainer, while a top scholar and math team member, was happy serving up ice cream at a beach shop. “I enjoyed food service,” she says. “I had a million things in my head to think about and I got paid for a job that left my mind free to wander all day.”

But Trainer soon shifted course. She’d had a revelation in physics class: “The most excited I’d been in high school was when a teacher described how nuclear reactors worked, what E=mc2 is, and I thought I should learn more about this stuff.” She also won a scholarship to Embry-Riddle Aeronautical University to learn computer coding, and discovered she had a knack for programming. Then, after a friend in a fantasy basketball league suggested she was accomplished enough to attend college, Trainer decided to apply to MIT.

Today, not even halfway through her undergraduate career, Trainer believes she has found her calling: “I’m very happy with what I’m working on now,” she says. “Why change a good thing?”

Her software writing proficiency has proved essential: She interned at Los Alamos National Laboratory last summer as a code developer, one of only a few undergraduates in her division. Coding is also central to her current CRPG research, which involves processing giant data libraries generated by the national laboratories into compact versions whose parameters are used by CRPG codes for the purposes of performing reactor simulations. She is also comparing U.S. data libraries to those of other countries, which are based on different assumptions and experiments.

At this point, Trainer says she would like nothing better than to pursue an academic career “just trying slowly to add to the bank of what people understand about nuclear energy, furthering computational tools.” She would be especially pleased to do this at MIT.

“I have an opportunity to be at the forefront, studying under the most brilliant minds, and if I don’t take advantage of this, I’d be completely missing out,” Trainer says.