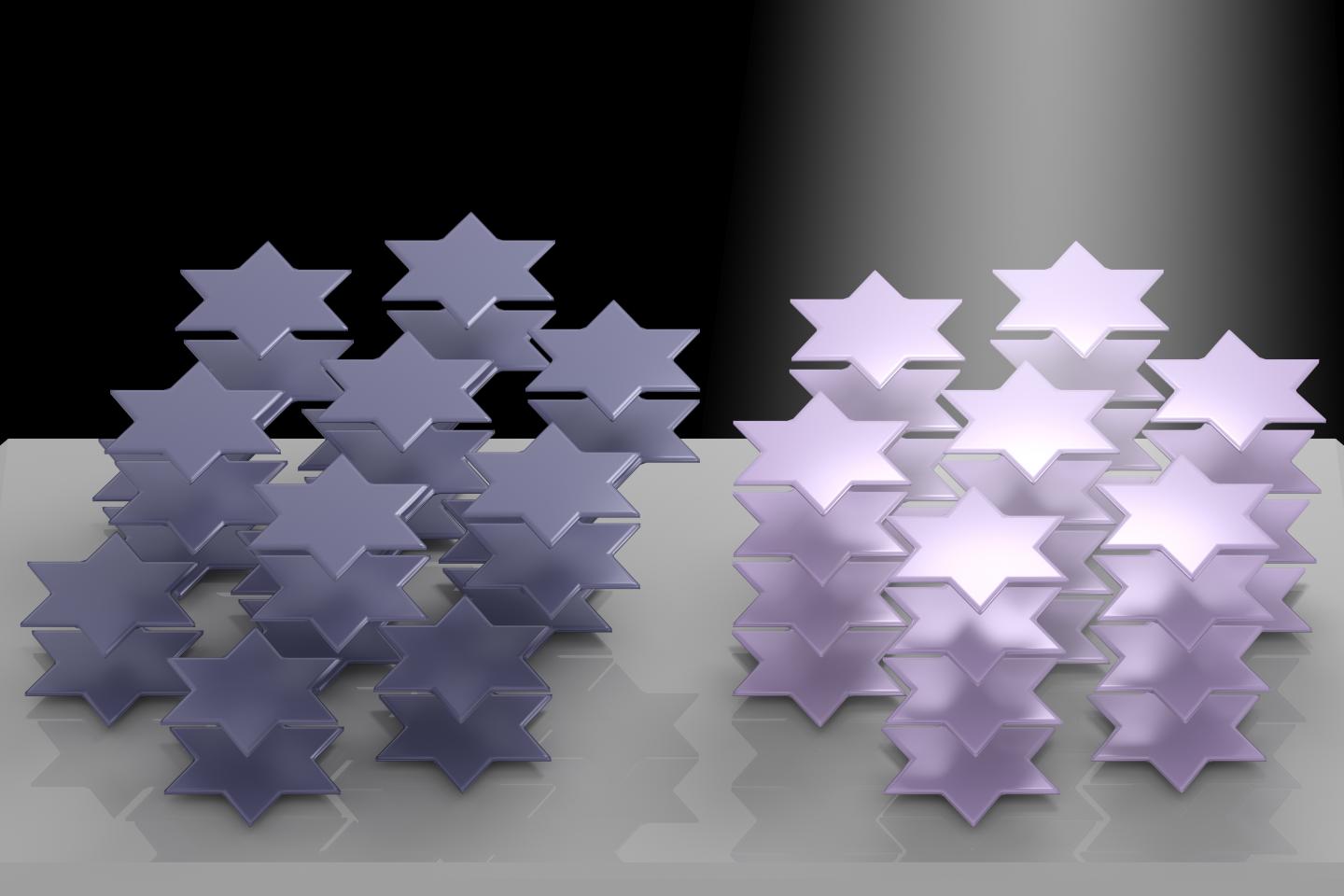 HOUSTON – (Sept. 2, 2020) – Microscopic crystals in tantalum disulfide have a starring role in what could become a hit for 3D displays, virtual reality and even self-driving vehicles.

A two-dimensional array of the material has unique optical characteristics that can be controlled in ambient conditions and under general illumination, according to engineer Gururaj Naik and graduate student Weijian Li of Rice’s Brown School of Engineering.

When they pull a two-dimensional sliver off a bulk sample (with that tried-and-true tool, adhesive tape) and shine light on it, the layered material rearranges the charge density waves of electrons that flow through, altering its refractive index.

Light emitted along the affected axis changes its color depending on the strength of the light that goes in.

The discovery is detailed in the American Chemical Society journal Nano Letters.

“We need an optical material that can change the refractive index for applications like virtual reality, 3D displays, optical computers and lidar, which is necessary for autonomous vehicles,” said Naik, an assistant professor of electrical and computer engineering. “At the same time, it has to be fast. Only then can we enable these new technologies.”

Tantalum disulfide, a semiconducting, layered compound with a prismatic metal center, appears to fit the bill. The material is already known for harboring charge density waves at room temperature that allow adjustments to its electrical conductivity, but the strength of light input also changes its refractive index, which quantifies the speed at which light travels through. That makes it tunable, Naik said.

When exposed to light, the tantalum layer reorganizes into a lattice of 12-atom stars, like the Star of David or sheriff’s badges, that facilitate charge density waves. How these stars are stacked determines whether the compound is insulating or metallic along its c-axis.

It turns out that also determines its refractive index. Light triggers the stars to realign, changing the charge density waves enough to affect the material’s optical constants.

“This belongs to a class of what we call strongly correlated materials, which means the electrons strongly interact with each other,” Li said. “In this case, we can predict the properties that show a strong response to some external stimulus.”

That the stimulus is as mild as ambient white light is a plus, Naik added. “This is the first material we’ve seen where the interaction of light happens not just with single particles, but with a collection of particles together, at room temperature,” he said. The phenomenon appears to work in tantalum disulfide as thin as 10 nanometers and as thick as a millimeter, he said.

“We think this is an important discovery for those who study strongly correlated materials for applications,” Naik said. “We show light is a very powerful knob to change how correlation extends in this material.”

This news release can be found online at https://news.rice.edu/2020/09/02/ambient-light-alters-refraction-in-2d-material/

Atoms in the crystal lattice of tantalum disulfide arrange themselves into six-pointed stars that can be manipulated by light, according to Rice University researchers. The phenomenon can be used to control the material’s refractive index. It could become useful for 3D displays, virtual reality and in lidar systems for self-driving vehicles. (Credit: Weijian Li/Rice University)

Located on a 300-acre forested campus in Houston, Rice University is consistently ranked among the nation’s top 20 universities by U.S. News & World Report. Rice has highly respected schools of Architecture, Business, Continuing Studies, Engineering, Humanities, Music, Natural Sciences and Social Sciences and is home to the Baker Institute for Public Policy. With 3,962 undergraduates and 3,027 graduate students, Rice’s undergraduate student-to-faculty ratio is just under 6-to-1. Its residential college system builds close-knit communities and lifelong friendships, just one reason why Rice is ranked No. 1 for quality of life and No. 1 for lots of race/class interaction by the Princeton Review. Rice is also rated as a best value among private universities by Kiplinger’s Personal Finance.