Alterations in the 3D genome structure and effects on fertility revealed 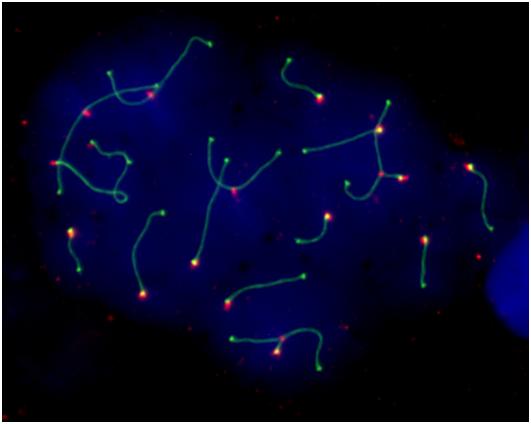 The genome is tightly organised (packaged) within the cell nuclei. This three-dimensional (3D) genome organisation is fundamental, given that it regulates gene expression.

A study led by scientists at the Universitat Autònoma de Barcelona (UAB) now demonstrates using mice models that the 3D organisation of the genome is extremely dynamic during the formation of male germ cells (precursors of spermatozoa) and that alterations in this structure can affect fertility.

The research, published in Nature Communications, describes the 3D genome organisation in germ cells of wild populations of house mice (Mus musculus domesticus) with chromosomal rearrangements, alterations in the genome which change the structure of chromosomes. The study represents a significant advance in research into mechanisms generating and regulating the structure and function of the genome during the formation of gametes (oocytes and sperm).

Sexually-reproducing organisms produce haploid gametes (with one single set of chromosomes) through two consecutive cell divisions preceded by one only round of genome replication. During this process (called meiosis), the organisation of the genome is tightly regulated to allow for recombination, a fundamental mechanism that maintains the genetic diversity of the organism through the exchange of the progenitors’ homologous chromosomes, while at the same time allowing the resulting chromosomes to be transmitted integrally, with no alterations in their structure and/or number, to the next generation.

“The study shows that both the dynamics of the genome organisation during the formation of gametes and the recombination is affected by the presence of chromosomal rearrangements”, explains Aurora Ruiz-Herrera, Associated Professor at the Department of Cellular Biology, Physiology and Immunology and the Institute of Biotechnology and Biomedicine (IBB) of the UAB, and head of the research. “We detected that these chromosomal rearrangements affect chromosome folding within the nucleus of the germ cells, thus altering the pairing pattern of homologous chromosomes and meiotic recombination. These results will pave the way for new investigations into the genetic mechanisms responsible for infertility.”

“The results point to the importance of the three-dimensional genomic context in which the recombination takes place, where factors such as chromosomal reorganizations can shape the genomic makeup of a given species”, explains Covadonga Vara, member of the research group coordinated by Aurora Ruiz-Herrera and co-author of the paper.

According to scientists, determining the mechanisms regulating the structure and function of the genome during the formation of gametes is fundamental, given that the deregulation of this process can cause disorders such as infertility and an alteration in the number of chromosomes, such as trisomy-21.