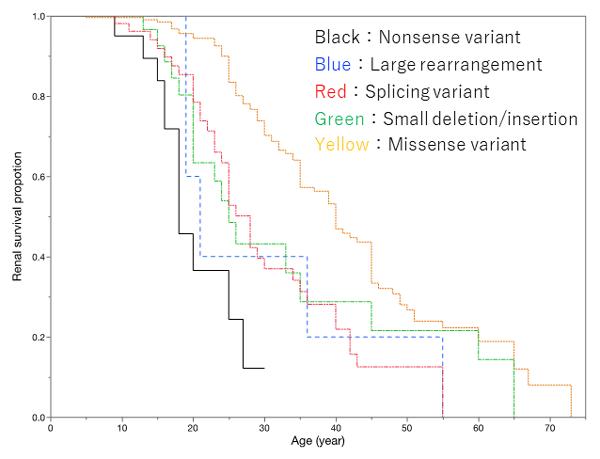 A large-scale analysis of the clinical characteristics of Alport syndrome in Japanese patients has revealed that the effectiveness of existing treatment with ACE inhibitors and/or angiotensin receptor blockers (RAS inhibitors) (*1) varies depending on the type of mutation in the syndrome’s causal gene (COL4A5). RAS inhibitors are widely administered to patients with chronic kidney diseases as they are known to preserve kidney functions, and they are also effective against Alport Syndrome. In addition to providing proof of the effectiveness of RAS inhibitor treatment in Japanese patients with Alport syndrome, the researchers revealed for the first time in the world that the degree of effectiveness depends on the genotype.

These results were published online in the journal ‘Kidney International‘ on July 23, 2020.

XLAS develops due to pathological mutations in the COL4A5 gene that encodes the type IV collagen α5 chain. In particular, male patients with XLAS are likely to have severe symptoms and around 90% of them experience ESKD by the age of 40. This requires them to undergo renal replacement therapies such as dialysis and kidney transplants. However, there is still no specialized treatment for Alport syndrome itself.

Men with severe types of Alport syndrome (such as those caused by nonsense mutations in the COL4A5 gene) develop ESKD over ten years earlier than those with milder forms (such as those caused by missense mutations). A possible treatment for Alport syndrome involves using ACE inhibitors and/or angiotensin receptor blockers (RAS inhibitors) to preserve kidney functions. So far, studies conducted outside Japan have shown these treatments to be effective for lowering urinary protein levels and suppressing the progression of kidney function deterioration.

Up until now, this research team has established a comprehensive genetic diagnosis system for Alport syndrome, which has enabled them to conduct genetic diagnoses of Japanese patients. This time, the researchers conducted a retrospective investigation into the clinical characteristics of the disorder in 430 male patients with XLAS. From these results and by drawing on the findings of other research, they revealed the following:

1. It was possible to analyze the clinical data of 422 of these patients, and the results showed that the median age for progression to ESKD was 35.

4. Clinical data from 207 patients that showed whether or not they were prescribed RAS inhibitors was also analyzed. The results revealed that those who didn’t receive RAS inhibitor treatment developed ESKD by a median age of 28, whereas over half of those prescribed with RAS inhibitors did not develop ESKD before the age of 50. In other words, it was shown that this drug could delay the onset of ESKD by over 20 years (Figure 2).

5. Subsequently, the researchers evaluated the effectiveness of RAS inhibitors depending on whether the patient had a severe mutation or a minor mutation. In patients with minor mutations, those who were not administered RAS inhibitors developed ESKD at a median age of 33 (Figure 3: red survival curve), whereas over half of those who received treatment with the drug did not develop ESKD before a median age of 50 (Figure 3: blue survival curve).

On the other hand, in patients with severe mutations, the group who weren’t prescribed RAS inhibitors progressed to ESKD by a median of 16 years of age (Figure 3: black survival curve), whereas those receiving RAS inhibitor treatment developed ESKD at a median age of 28 (Figure 3: green survival curve). Therefore, the drug was effective in treating Alport syndrome caused by severe mutations as it delayed the onset of ESKD in patients by a median of 12 years. However the treatment was shown to be less effective than in patients with minor mutations (Figure 3).

The Renin-Angiotensin-Aldosterone System (RAS, or RAAS) is responsible for regulating blood pressure. RAS inhibitors have a hypotensive effect as they block a number of hormones that raise blood pressure. Originally prescribed as a blood pressure lowering medication, in recent years these inhibitors have been shown to be effective against chronic kidney diseases, such as diabetic nephropathy, as they preserve kidney functions.

2. X-linked form of a disease:

A hereditary disease that occurs as a result of a mutation in a gene that coded the X chromosome. The symptoms are more severe in men because they only have one X chromosome, whereas women have two.

A treatment method that can change severe mutations into minor mutations by using a nucleic acid medicine to skip over exons with nonsense mutations. So far, this treatment has been shown to be effective in research on animals (Yamamura T et al, Nature Communications 2020).

From April 2017 onwards, this research has been continued based on funding from the Japan Agency for Medical Research and Development (AMED) ‘Step 0’ (which supports exploratory research into revolutionary treatments and medical devices for intractable and rare diseases).

3 Department of Child Health and Welfare (Pediatrics), Graduate School of Medicine, University of the Ryukyus