Scientists using the Atacama Large Millimeter/submillimeter Array (ALMA) and the Karl G. Jansky Very Large Array (VLA) made a rare detection of a likely stellar flyby event in the Z Canis Majoris (Z CMa) star system. An intruder—not bound to the system—object came in close proximity to and interacted with the environment surrounding the binary protostar, causing the formation of chaotic, stretched-out streams of dust and gas in the disk surrounding it. 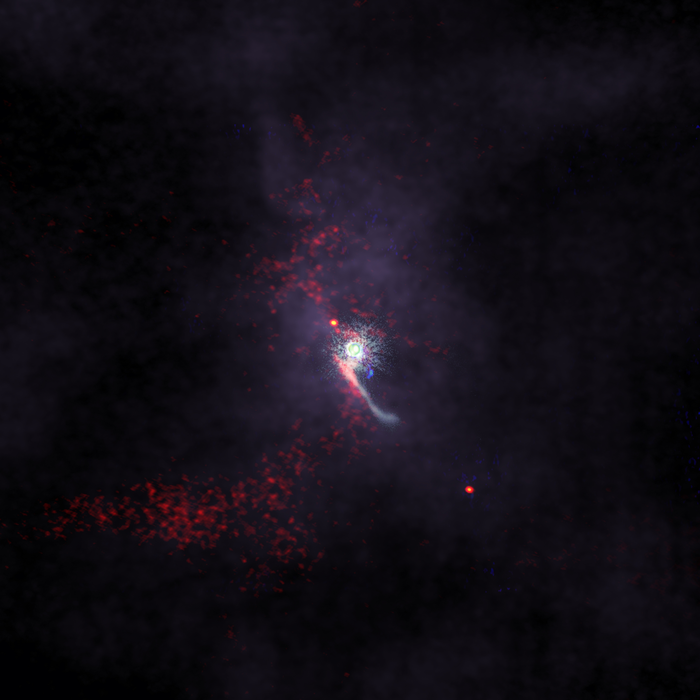 Scientists using the Atacama Large Millimeter/submillimeter Array (ALMA) and the Karl G. Jansky Very Large Array (VLA) made a rare detection of a likely stellar flyby event in the Z Canis Majoris (Z CMa) star system. An intruder—not bound to the system—object came in close proximity to and interacted with the environment surrounding the binary protostar, causing the formation of chaotic, stretched-out streams of dust and gas in the disk surrounding it.

While such intruder-based flyby events have previously been witnessed with some regularity in computer simulations of star formation, few convincing direct observations have ever been made, and until now, the events have remained largely theoretical.

“Observational evidence of flyby events is difficult to obtain because these events happen fast and it is difficult to capture them in action. What we have done with our ALMA Band 6 and VLA observations is equivalent to capturing lightning striking a tree,” said Ruobing Dong, an astronomer at the University of Victoria in Canada and the principal investigator on the new study. “This discovery shows that close encounters between young stars harboring disks do happen in real life, and they are not just theoretical situations seen in computer simulations. Prior observational studies had seen flybys, but hadn’t been able to collect the comprehensive evidence we were able to obtain of the event at Z CMa.”

Perturbations, or disturbances, like those at Z CMa aren’t typically caused by intruders, but rather by sibling stars growing up together in space. Hau-Yu Baobab Liu, an astronomer at the Institute of Astronomy and Astrophysics at Academia Sinica in Taiwan and a co-author on the paper, said, “Most often, stars do not form in isolation. The twins, or even triplets or quadruplets, born together may be gravitationally attracted and, as a result, closely approach each other. During these moments, some material on the stars’ protoplanetary disks may be stripped off to form extended gas streams that provide clues to astronomers about the history of past stellar encounters.”

Nicolás Cuello, an astrophysicist and Marie Curie Fellow at Université Grenoble Alpes in France and a co-author on the paper added that in the case of Z CMa, it was the morphology, or structure, of these streams that helped scientists to identify and pinpoint the intruder. “When a stellar encounter occurs, it causes changes in disk morphology—spirals, warps, shadows, etc.—that could be considered as flyby fingerprints. In this case, by looking very carefully at Z CMa’s disk, we revealed the presence of several flyby fingerprints.”

These fingerprints not only helped scientists to identify the intruder but also led them to consider what these interactions might mean for the future of Z CMa and the baby planets being born in the system, a process that so far has remained a mystery to scientists. “What we now know with this new research is that flyby events do occur in nature and that they have major impacts on the gaseous circumstellar disks, which are the birth cradles of planets, surrounding baby stars,” said Cuello. “Flyby events can dramatically perturb the circumstellar disks around participant stars, as we’ve seen with the production of long streamers around Z CMa.”

Liu added, “These perturbers not only cause gaseous streams but may also impact the thermal history of the involved host stars, like Z CMa. This can lead to such violent events as accretion outbursts, and also impact the development of the overall star system in ways that we haven’t yet observed or defined.”

Dong said that studying the evolution and growth of young star systems throughout the galaxy helps scientists to better understand our own Solar System’s origin. “Studying these types of events gives a window into the past, including what might have happened in the early development of our own Solar System, critical evidence of which is long since gone. Watching these events take place in a newly forming star system provides us with the information needed to say, ‘Ah-ha! This is what may have happened to our own Solar System long ago.’ Right now, VLA and ALMA have given us the first evidence to solve this mystery, and the next generations of these technologies will open windows on the Universe that we have yet only dreamed of.”

Recently, the National Radio Astronomy Observatory (NRAO) received approval for its Central Development Laboratory (CDL) to develop a multi-million dollar upgrade to ALMA’s Band 6 receiver, and the Observatory’s next-generation VLA (ngVLA) received strong support from the astronomical community in the Astro2020 Decadal Survey. Technological advancements for both telescopes will lead to better observations, and a potentially significant increase in the discovery of difficult-to-see objects, like Z CMa’s stellar intruder. Both projects are funded in part by the National Science Foundation (NSF). “These observations highlight the synergy that can come from a newer instrument working in concert with a more seasoned one, and how good a workhorse the ALMA Band 6 receiver is,” said Dr. Joe Pesce, astrophysicist and ALMA Program Director at the NSF. “I look forward to the even-better results the upgraded ALMA Band 6 receiver will enable.”