All Hands on Deck: Life onboard a floating laboratory on the Great Lakes 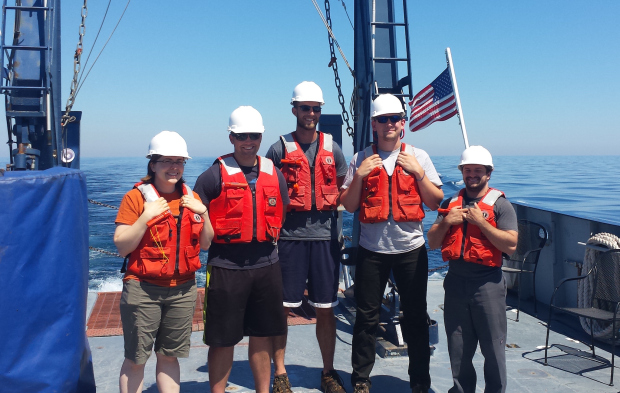 The research crew aboard the Blue Heron. Photo contributed by Doug Ricketts

“The only thing you can predict on a ship are meal times,” Sara Paver, PhD, said. “There really is no typical day. You do your work when you get to your station, which can involve being up for all hours.”

Paver, a postdoc in the Department of the Geophysical Sciences, studies the microbial ecology of the Great Lakes. She has spent over a month total in the past year living aboard research vessels while collecting samples for her research. Most of that time was spent on the Lake Guardian, a research vessel run by the Environmental Protection Agency, but she recently returned from a 4-day, 250 nautical mile training cruise aboard the Blue Heron, a former fishing boat repurposed as a research vessel.

The Blue Heron is part of the University National Oceanographic Laboratory System (UNOLS) fleet of research vessels, and is operated by the Large Lakes Observatory at the University of Minnesota Duluth. This most recent cruise was a Chief Scientist Training Cruise led by Doug Ricketts from the Large Lakes Observatory. The training cruise was funded by the National Science Foundation and teaches early career scientists how to utilize UNOLS vessels for their research and serve as a chief scientist. The role of a chief scientist on a research cruise, held by Paver aboard the Blue Heron for this excursion, is to coordinate the science of the researchers on board and act as a liaison between the science party and the captain.

“You are responsible for all of the science-related decisions on the cruise,” said Paver, “Being able to make decisions about what was going to happen with the ship, and where we were going to collect samples was a neat position to be in.”

In addition to the survey cruise providing a hands-on training opportunity, Paver was also able to collect samples for her research studies in the lab of Maureen Coleman, assistant professor of Geophysical Sciences. Paver’s research focuses on the factors that cause aquatic microbial populations and communities to change over time and space.

“Microorganisms are key components of ecosystems that help regulate energy flow and the cycling of carbon and nutrients. Understanding what drives change in microbial populations has potential applications for helping predict how microbial communities respond to changes in the environment,” Paver said.

Paver’s work on this cruise focused on how cyanobacteria [photosynthetic bacteria] populations change with depth. With the UNOLS Blue Heron vessel, researchers have a lot of flexibility and can choose their sampling locations and depths, allowing Paver to collect samples over many depths.

“Increased depth resolution allows us to determine whether populations of cyanobacteria coexist by having different distributions in the water column that reflect their adaptations to factors that change with depth like light, concentrations of various nutrients, and temperature,” she said.

The CTD Rosette on board the Blue Heron. Photo contributed by Sara Paver

For water sample collection the major equipment workhorse of a ship is called a CTD Rosette. The CTD (short for conductivity – temperature – depth) is used to measure temperature, fluorescence, turbidity, oxygen levels, and pH. Surrounding the CTD is the rosette, a ring of water collection bottles. The rosette on the Blue Heron consists of 12 collection bottles that hold about 8 liters of water each.

Operated by a marine technician aboard the ship who is an expert in the on board scientific equipment, the CTD Rosette is lowered into the water using an electronically controlled winch. As the rosette descends to the bottom of the lake the CTD profiles physical and chemical conditions in real time, and the water collection bottles remain open, allowing for a ‘rinsing’ period. Scientists often use data collected by the CTD to determine sample collection depths. As the rosette returns to the surface the technician ‘fires’ each bottle, causing the caps on both ends to snap shut and enclose water from the desired depth.

After collecting data and samples using the CTD Rosette, the collected water is transported inside the ship into the lab space and filtered, a process that can take many hours. In total, Paver filtered over 250 liters of water during the voyage, and stored the filters for downstream analysis.

“We will extract DNA from filters used to concentrate microorganisms and sequence the DNA to profile the cyanobacteria present across depths,” she said. “This initial characterization will be used to develop assays targeting specific populations for future research.”

Science on the water versus in the lab

The biggest difficulty of doing science on the open water for Paver was working while the ship was sailing through 3-foot waves.

“The day we hit rough weather and I had to filter water for hours while it was turbulent sailing. That was probably the hardest,” Paver said. As chief scientist, she made the call to return to port in Milwaukee overnight to escape from the waves.

In addition to looking out for weather changes the crew and researchers also had to be aware of other vessels like barges and ferries in the areas they were sampling. As to what is different about doing her science aboard a boat versus in the laboratory Paver says there is actually not much difference at all.

“These ships are amazing floating laboratories. You have everything you would need from the lab. It can be a little bit of a bumpy ride and you need to tie down all of your equipment, but there is not a whole lot different in how I process my samples on a ship versus in the lab, plus you have the benefit of having someone cook for you while you are out there!”