Algorithm could shorten quality testing, research in many industries by months 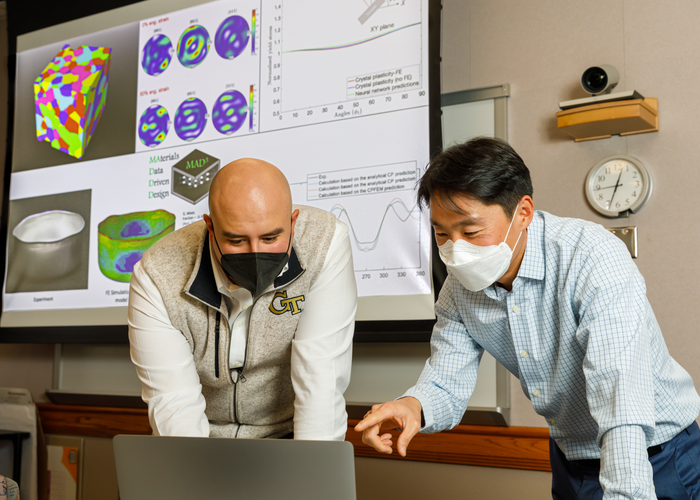 The technique was published recently in the scientific journal Materials Science and Engineering: A.

Production stoppages are costly. So, manufacturers screen materials like sheet metal for formability before using them to make sure the material will not crack when it is stamped, stretched and strained as it’s formed into different parts. Companies often use commercial simulation software calibrated to the results of various mechanical tests, said Sandia scientist David Montes de Oca Zapiain, the lead author on the paper. However, these tests can take months to complete.

And while certain high-fidelity computer simulations can assess formability in only a few weeks, companies need access to a supercomputer and specialized expertise to run them, Montes de Oca Zapiain said.

Sandia has shown machine learning can dramatically cut time and resources to calibrate commercial software because the algorithm does not need information from mechanical tests, said Montes de Oca Zapiain. Nor does the method need a supercomputer. Additionally, it opens a new path to perform faster research and development.

“You could efficiently use this algorithm to potentially find lighter materials with minimal resources without sacrificing safety or accuracy,” Montes de Oca Zapiain said.

The machine-learning algorithm named MAD3, pronounced “mad cubed” and short for Material Data Driven Design, works because metal alloys are made of microscopic, so-called “crystallographic” grains. Collectively, these grains form a texture that makes the metal stronger in some directions than others, a phenomenon that researchers call mechanical anisotropy.

“We’ve trained the model to understand the relationship between crystallographic texture and anisotropic mechanical response,” Montes de Oca Zapiain said. “You need an electron microscope to get the texture of a metal, but then you can drop that information into the algorithm, and it predicts the data you need for the simulation software without performing any mechanical tests.”

Teaming with Ohio State University, Sandia trained the algorithm on the results of 54,000 simulated materials tests using a technique called a feed-forward neural network. The Sandia team then presented the algorithm with 20,000 new microstructures to test its accuracy, comparing the algorithm’s calculations with data gathered from experiments and supercomputer-based simulations.

“The developed algorithm is about 1,000 times faster compared to high-fidelity simulations. We are actively working on improving the model by incorporating advanced features to capture the evolution of the anisotropy since that is necessary to accurately predict the fracture limits of the material,” said Sandia scientist Hojun Lim, who also contributed to the research.

As a national security laboratory, Sandia is conducting further research to explore whether the algorithm can shorten quality assurance processes for the U.S. nuclear stockpile, where materials must meet rigorous standards before being accepted for production use. The National Nuclear Security Administration funded the machine-learning research through the Advanced Simulation and Computing program.

To enable other institutions to take advantage of the technology, Sandia formed a cross-disciplinary team to develop the user-friendly, graphics-based Material Data Driven Design software. It was developed with input from more than 75 interviews with potential users through the Department of Energy’s Energy I-Corps program. Individuals and organizations interested in licensing can contact [email protected] for more information.