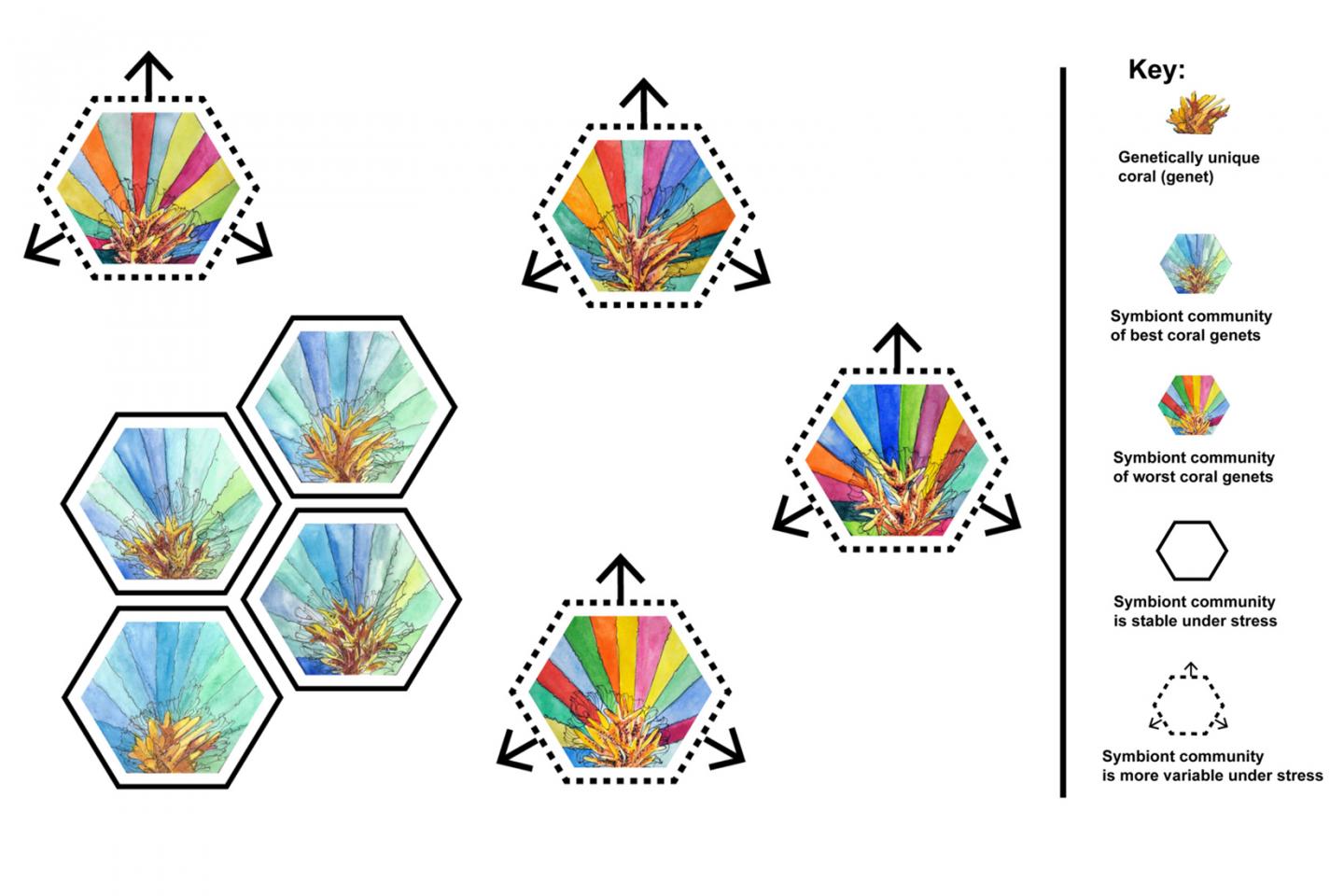 HOUSTON — (Feb. 12, 2020) — U.S. and Australian researchers have found a potential tool for identifying “super corals” that can tolerate a limited amount of climate change.

“We may be able to use algae team characteristics to identify coral colonies to focus on for conservation or restoration,'” said veteran reef researcher Adrienne Correa, a Rice University marine biologist and co-author of a newly published study in the journal Global Change Biology. “It’s not sufficient — if we don’t limit carbon dioxide emissions, it’s not going to be enough to save coral reefs — but it’s exciting.”

In the study, marine biologists from the Australian Institute of Marine Science (AIMS) gathered corals from the Great Barrier Reef and used separately controlled tanks to compare how well they responded to rising ocean temperatures, increased acidity and exposure to bacterial pests.

A look at the symbiotic algae inside the corals revealed an interesting dynamic: Corals with more similar groups of algae survived better under stress.

“What’s unique about this project is that we looked at the whole community of symbiotic algae in relation to coral stress tolerance in these colonies,” said Rice graduate student and study lead co-author Lauren Howe-Kerr.

“It’s like looking at all the players on a sports team together as you try to predict how their next season might go,” said Correa, Howe-Kerr’s Ph.D. advisor and an assistant professor of biosciences at Rice. “Individual talent is important, but so is the team that talent works with.”

Howe-Kerr began her research during a 2016 undergraduate study abroad semester at AIMS in Townsville, Queensland. While others examined the corals’ evolution of resistance to the experimental stresses, she focused on their single-celled partners, a kind of algae called dinoflagellates.

In exchange for a protected life inside corals, dinoflagellates help feed their hosts by converting sunlight into food. They also impart the vibrant colors that are seen in reefs. A single coral colony can be home to multiple species of dinoflagellates. And while they may look identical under a microscope, the differences between groups are detectable by DNA analysis.

In the Global Change Biology study, Howe-Kerr, Correa and co-authors, including Bénédicte Bachelot of Rice and Line Bay of AIMS, showed how symbiont community diversity might be used to predict coral stress response.

“In the past, a lot of studies have looked for ‘savior’ symbionts, specific types that provide the coral colony with extra stress tolerance,” Correa said. “Lauren had the great idea to look at how the microbiome, or this symbiotic community of dinoflagellates, holistically related to stress response.”

Correa said the study did not directly test how well the symbionts worked together as a team.

“That’s a next step, but for this study we just know the roster of players, or species, on each team,” she said. “We know that the team rosters for poorly performing corals contain more variable symbiont communities than the rosters for the best performers. And that tells us that the identity of specific symbionts, or players, isn’t the only important factor.”

In the study, corals were subjected to 10-day stress tests in flow-through seawater tanks at the AIMS National Sea Simulator. In independently controlled tanks, fragments of each of the colonies were exposed to the kinds of stress corals undergo as a result of human-caused climate change. In one set of tanks, temperatures gradually increased from 27 to 30 degrees Celsius (80.6 to 86 degrees Fahrenheit). In another, dissolved carbon dioxide was added to the seawater to simulate ocean acidification. The pH in these tanks dropped gradually from 8.0 to 7.8 during the 10-day test. A third group of tanks simulated the stress caused by bacterial pathogens on reefs. Corals in a fourth set of tanks were simultaneously exposed to all three stresses, and the experiment also included a control, a fifth group of tanks where corals were stress-free.

Howe-Kerr compared the communal structures of dinoflagellate symbionts in two groups of corals: the four colonies that responded best to the stresses and the four that responded worst.

“In the best-performing corals, we saw a more constrained community that changed very little, no matter which stress they experienced.” she said. “In contrast, the colonies that performed poorly under stress had community characteristics that varied. You could even see this in the controls, which hadn’t experienced stress.”

The results suggest that the symbiont communities in the best performers are working well together and with their coral host, both under good conditions and under stress. In the worst performers, the diversity of patterns instead suggests that some corals aren’t as good at controlling their microbiome, and under stress, their dinoflagellate teams can go haywire.

Correa said the results suggest that the coral symbiont microbiome is subject to the “Anna Karenina principle,” a scientific paradigm described by the first sentence of Leo Tolstoy’s 1878 novel “Anna Karenina”: “Happy families are all alike; every unhappy family is unhappy in its own way.”

Tolstoy was no scientist, but his insight into human family dynamics was so keen that scientists have adapted it as a general concept for success and failure in complex systems. In complex undertakings that depend upon many factors, and where each factor is critical for success, the principle means that a single deficiency, in any factor, can spell failure. But because there are so many ways to fail, no two failures play out the same. Successes, in contrast, tend to look the same, because each is a case with no critical failure.

The principle has been applied in statistics, economics, medicine, ecology and more, but Correa said this is the first application to the study of coral-dinoflagellate microbiomes.

Howe-Kerr said she is looking forward to seeing whether the results from the tank-based experiments also apply to corals experiencing stress on reefs.

“Over the past two years, we’ve been involved in a sampling effort in Mo’orea, French Polynesia, where we’ve tagged individual coral colonies all around the island,” she said. “When I was there last summer, there was a massive bleaching event. Almost all of the colonies that we had already sampled in previous years bleached.”

Coral bleaching occurs when corals expel their dinoflagellate partners in response to extreme stress. Coral bleaching has become increasingly common as ocean temperatures have increased over the past 40 years. Some corals survive bleaching, but many do not.

“Because of the work we’ve already done, there’s an opportunity to test the tank-based findings on a large-scale around the island,” Howe-Kerr said. “We want to see if it’s possible to predict which corals ultimately survived the bleaching event based upon the prior makeup of their symbiont community.”

Additional co-authors include Carly Kenkel of the University of Southern California and Rachel Wright of Smith College in Northampton, Massachusetts. The research was supported by the National Science Foundation (OCE-1635798, DBI-1401165), Sigma Xi’s Grant-in-Aid of Research Program and AIMS.

CAPTION: Rice University’s Lauren Howe-Kerr (left) and Adrienne Correa are part of a research team that found it may be possible to predict how well a coral will tolerate the stresses of climate change by examining the team of symbiotic algae living inside it. (Photo by Brandon Martin/Rice University)

Development of 3D particle model for single particles in battery…