Launched on 23 May 2022 with Deputy Prime Minister of Singapore, Mr. Heng Swee Keat, as the Guest of Honour, Albert Winsemius and Singapore: Here It is Going to Happen lays out the contributions of Albert Winsemius, a quietly unassuming and publicity-shy Dutch policymaker, businessman and economic adviser, and his synergy and discussions with the pioneering leaders of Singapore like Mr Lee Kuan Yew and Dr Goh Keng Swee. 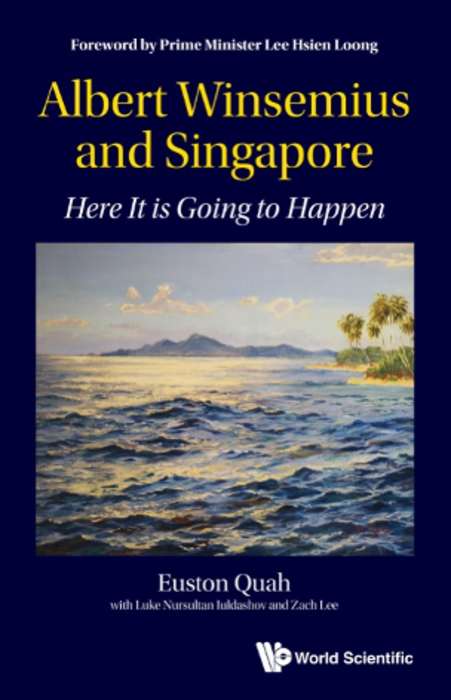 Launched on 23 May 2022 with Deputy Prime Minister of Singapore, Mr. Heng Swee Keat, as the Guest of Honour, Albert Winsemius and Singapore: Here It is Going to Happen lays out the contributions of Albert Winsemius, a quietly unassuming and publicity-shy Dutch policymaker, businessman and economic adviser, and his synergy and discussions with the pioneering leaders of Singapore like Mr Lee Kuan Yew and Dr Goh Keng Swee.

Distinguished guests at the launch included the Dutch Ambassador to Singapore, H.E. Margriet Vonno, Emeritus Senior Minister Goh Chok Tong, Minister Vivian Balakrishnan, and Dr. Pieter Winsemius and the Winsemius Family. The launch celebrated the close ties between Singapore and the Netherlands along with initiatives such as the 2022 Winsemius Awards and the Singapore Netherlands Innovation Forum.

For the first time, a team of Nanyang Technological University, Singapore (NTU Singapore) economists have compiled a detailed, wide-ranging, and meticulous study of Albert Winsemius’ impact on Singapore’s early economic development. With material sourced from archives in the Netherlands and Singapore, and supplanted with extensive first-person interviews with people who had the pleasure of working alongside Albert Winsemius, the book examines his affinity with Singapore and his contributions to the country’s economic growth and development.

The book answers the following questions:

Reviewing and expanding on various literary sources with contributions from the Netherlands and Singapore’s experts, Albert Winsemius and Singapore looks at the legacy of Singapore’s former Chief External Economic Advisor and his influence on past, current, and future economy planners. In addition to a study of Albert Winsemius’ life in the Netherlands and prior to his arrival in Singapore, the book provides information on his contributions to economic development, industrial strategy, and wage policy, focusing in particular on his work for Singapore. Particular attention is paid to the economic development literature of the time, that is in the 1950s and 1960s, and the book analyses to what extent Albert Winsemius’ prescription matches the prevailing economic thoughts of the time.

“World Scientific is proud to publish this extraordinary book on the influence and impact of Albert Winsemius on Singapore and our economy,” said Mr Max Phua, Managing Director of World Scientific Publishing. “We hope that this biography will increase awareness of how Dr Winsemius contributed to the development and growth of a small island state like Singapore, well beyond the realm of economists and economics.”

The book is organised as follows: Part I describes the life and contributions of Albert Winsemius before and after his arrival in Singapore as well as the intermittent years when Albert Winsemius returned to Singapore after his retirement. Part II presents the development economics literature of the time from both the theoretical and practical perspectives. Included in this section is a discussion on what constitutes sound economic advice. Part III provides some retrospections of Albert Winsemius’ influences on Singapore. The wage policy of the time is particularly mentioned and analysed in Part III. This also includes a discussion on possible connections between Albert Winsemius, the environment and sustainable development. Part IV contains valuable reminiscences, interviews and vignettes. Part V concludes the book by presenting a summary of Albert Winsemius’ contributions and commemorations. There is also an additional heritage and historical trail journey through Singapore as possibly experienced by Albert Winsemius.

This book was written by Professor Euston Quah under the support of the Albert Winsemius Chair Professorship endowment at Nanyang Technological University, Singapore (NTU, Singapore), together with Luke Nursultan Iuldashov and Zach Lee, both also from NTU. It also contains specially invited contributions by distinguished people who personally knew Albert Winsemius or his work.

Professor Euston Quah said: “Reviewing and expanding on various literary sources with contributions from The Netherlands and Singapore’s experts, this book aims to be a comprehensive and definitive work on Albert Winsemius, Singapore’s former Chief External Economic Advisor.”

”Albert Winsemius brought not only his experience and knowledge as a person who has served in the government but also his training as an economist to bear on the problems of Singapore. Working in tandem with Singapore leaders of the time, they found a common mission: how to overcome the major obstacles and constraints faced by Singapore and how to grow the economy and improve the lives of its citizens through fostering economic development. The successful outcome of their efforts can only be due to their shared understanding of their task and their synergy in ideas and most importantly a strong sense of pragmatism in facing challenging adversities. His consul remains relevant today, especially his prescience in balancing pro-market policies with state intervention, attracting and retaining of human capital, and ensuring industrial harmony and a stable political climate,” said Professor Euston Quah, who is also the Director of NTU’s Economic Growth Centre and President of the Economic Society of Singapore.

Albert Winsemius and Singapore: Here It is Going to Happen retails for US$188 / £150 and is also available in electronic formats. To order or know more about the book, visit http://www.worldscientific.com/worldscibooks/10.1142/12081.

Euston QUAH is the Albert Winsemius Chair Professor and Head of Economics at the Nanyang Technological University (NTU), Singapore, and an Adjunct Principal Research Fellow of the Institute of Policy Studies at the National University of Singapore (NUS). A prolific writer, Professor Quah has published over 100 papers in major internationally refereed journals and opinion pieces. Selected works include an international publication on cost-benefit analysis for Oxford University Press, 2013; a lead journal article in World Economy in 2015; a Commentary in the Asian Economic Policy Review in 2016; an invited paper in the Macroeconomic Review in 2017; and forthcoming papers in the Asian Development Bank Institute monograph (2019). His work on Cost-Benefit Analysis (with E J Mishan 5th edition, and 6th edition due in 2020) was recommended for reference by the US White House, Office of Management and Budget for use by government agencies applying for project grants. Professor Quah is also the co-author of an Asian Edition of the best-selling Principles of Economics text with Gregory Mankiw of Harvard University, now a 2nd edition in 2013. The 3rd Edition was published in 2020.

Luke Nursultan IULDASHOV is a Research Associate at Nanyang Technological University (NTU), Singapore. Luke scored in the top 1% in the Republican University Entrance Test in the Kyrgyz Republic. He did his undergraduate studies in Economics at the American University of Central Asia, Kyrgyz Republic. Luke moved to Singapore in 2016 and graduated with a master’s degree in applied economics at NTU, where he has been working as a researcher since then. His research interests are in bioethics, economics of integration and economics of policy-advising. Besides research skills, Luke also has experience in project management and mentoring trainees at the Economic Growth Centre, NTU.

Zach LEE is a Research Associate at Nanyang Technological University (NTU), Singapore. An engineer by training with a graduate degree in Environmental Engineering, he is currently pursuing a PhD in Economics at NTU. Zach’s research interests are in cost-benefit analysis and the socio-economic evaluation of emerging technologies and environmental policies. He also has a keen interest in the economic history of his home country, Singapore.

World Scientific Publishing is a leading international independent publisher of books and journals for the scholarly, research and professional communities. World Scientific collaborates with prestigious organisations like the Nobel Foundation and US National Academies Press to bring high quality academic and professional content to researchers and academics worldwide. The company publishes about 600 books and over 140 journals in various fields annually. To find out more about World Scientific, please visit www.worldscientific.com.