November 15, 2022—(BRONX, NY)—Immune checkpoint inhibitors such as Keytruda and Opdivo work by unleashing the immune system’s T cells to attack tumor cells. Their introduction a decade ago marked a major advance in cancer therapy, but only 10% to 30% of treated patients experience long-term improvement. In a paper published online today in The Journal of Clinical Investigation (JCI), scientists at Albert Einstein College of Medicine describe findings that could bolster the effectiveness of immune-checkpoint therapy. 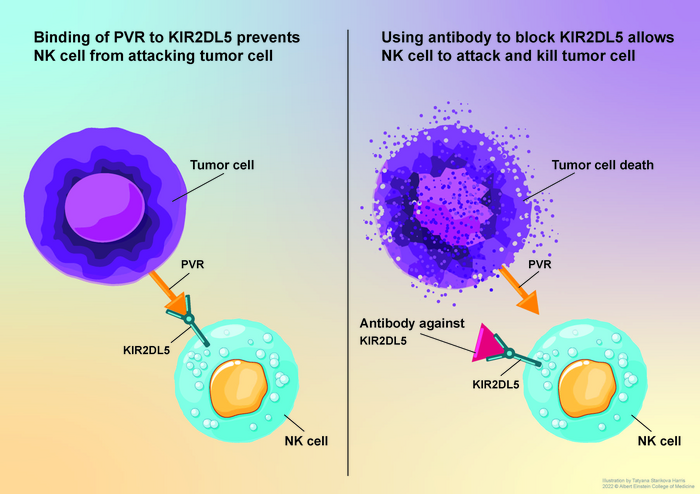 November 15, 2022—(BRONX, NY)—Immune checkpoint inhibitors such as Keytruda and Opdivo work by unleashing the immune system’s T cells to attack tumor cells. Their introduction a decade ago marked a major advance in cancer therapy, but only 10% to 30% of treated patients experience long-term improvement. In a paper published online today in The Journal of Clinical Investigation (JCI), scientists at Albert Einstein College of Medicine describe findings that could bolster the effectiveness of immune-checkpoint therapy.

Telling Friend from Foe
The surfaces of immune cells are studded with receptors known as “checkpoint” proteins, which prevent immune cells from straying beyond their usual targets (pathogen-infected cells and cancer cells). When checkpoint receptors on immune cells bind with proteins expressed by the body’s own normal cells, the interaction puts the brakes on a possible immune-cell attack. Diabolically, most types of cancer cells express proteins that bind with checkpoint proteins, tricking immune cells into standing down and not attacking the tumor.

Immune checkpoint inhibitors are monoclonal antibodies designed to short-circuit immune-cell/cancer-cell interactions by blocking either the tumor proteins or the immune-cell receptors that bind with tumor proteins. With no brakes to impede them, immune cells can attack and destroy cancer cells.

PVR protein is usually absent or very scarce in normal tissues but is found in abundance in many types of tumors including colorectal, ovarian, lung, esophageal, head and neck, stomach, and pancreatic cancer as well as myeloid leukemia and melanoma. Moreover, PVRs appeared to inhibit T cell and NK cell activity by binding to a checkpoint protein called TIGIT—prompting efforts to interrupt the TIGIT/PVR pathway by using monoclonal antibodies made against TIGIT. More than 100 clinical trials targeting TIGIT are now in progress worldwide. However, several clinical studies including two large phase 3 clinical trials have recently failed to improve cancer outcomes.

Recognizing the Role of a New Receptor
Meanwhile, the cancer-cell protein PVR was found to have another “binding partner” on NK cells: KIR2DL5. “We hypothesized that PVR suppresses NK cell activity not by binding with TIGIT but by binding with the recently recognized KIR2DL5,” said Dr. Zang. To find out, he and his colleagues synthesized a monoclonal antibody targeting KIR2DL5 and carried out in vitro and in vivo experiments using the antibody.

In their JCI paper, Dr. Zang and colleagues demonstrated that KIR2DL5 is a commonly occurring checkpoint receptor on the surface of human NK cells, which PVR cancer proteins use to suppress immune attack. In studies involving humanized animal models of several types of human cancers, the researchers showed that their monoclonal antibody against KIR2DL5—by blocking the KIR2DL5/PVR pathway—allowed NK cells to vigorously attack and shrink human tumors and prolong animal survival (see accompanying illustration). “These preclinical findings raise our hopes that targeting the KIR2DL5/PVR pathway was a good idea and that the monoclonal antibody we’ve developed may be an effective immunotherapy,” said Dr. Zang.

Einstein has filed a patent application for KIR2DL5/PVR immune checkpoint including antibody drugs and is interested in a partnership to further develop and commercialize the technology.

About Albert Einstein College of Medicine
Albert Einstein College of Medicine is one of the nation’s premier centers for research, medical education and clinical investigation. During the 2022-23 academic year, Einstein is home to 740 M.D. students, 194 Ph.D. students, 118 students in the combined M.D./Ph.D. program, and approximately 225 postdoctoral research fellows. The College of Medicine has more than 1,900 full-time faculty members located on the main campus and at its clinical affiliates. In 2022, Einstein received more than $202 million in awards from the National Institutes of Health. This includes the funding of major research centers at Einstein in cancer, aging, intellectual development disorders, diabetes, clinical and translational research, liver disease, and AIDS. Other areas where the College of Medicine is concentrating its efforts include developmental brain research, neuroscience, cardiac disease, and initiatives to reduce and eliminate ethnic and racial health disparities. Its partnership with Montefiore, the University Hospital and academic medical center for Einstein, advances clinical and translational research to accelerate the pace at which new discoveries become the treatments and therapies that benefit patients. For more information, please visit einsteinmed.edu, follow us on Twitter, Facebook, Instagram, LinkedIn, and view us on YouTube.