Alas, poor Yorick! I knew him…

Kyoto, Japan — Chimpanzees are known to interact with dead members of their species, revisiting corpses, and even showing mourning-like behavior. Elephants are also known to do this, and will even interact with elephant skeletons. 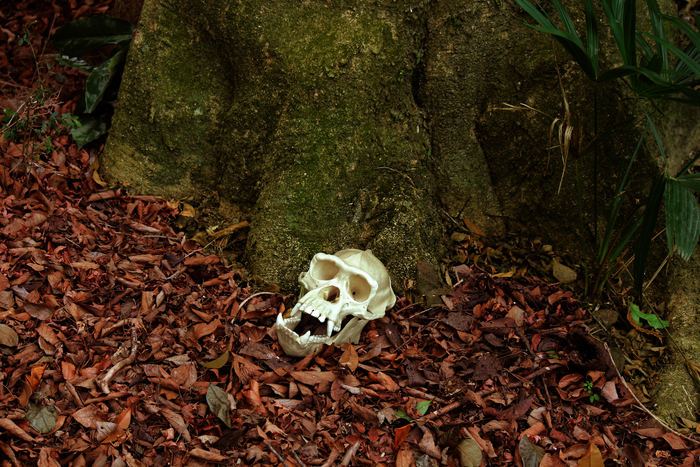 Kyoto, Japan — Chimpanzees are known to interact with dead members of their species, revisiting corpses, and even showing mourning-like behavior. Elephants are also known to do this, and will even interact with elephant skeletons.

But do chimpanzees show recognition and preferences in the case of conspecific skeletons: belonging to their own species? Previously, the scientific community has given little attention to this, perhaps assuming that chimpanzees have little or no knowledge of chimpanzee skeletal anatomy. The recent field of comparative thanatology has delved into this kind of question.

A Kyoto University team led by André Gonçalves has now tested chimpanzees’ visual attention to a series of images of conspecific and non-conspecific skulls.

Simply stated, chimpanzees seem to know when a skull is chimpanzee-like, relating to the phenomenon of pareidolia that is linked to the brain’s ability to detect faces.

“This explains why we see illusory faces in things like clouds and rocks, and primate skulls are as face-like as anything in nature,” adds Gonçalves.

These findings matched previous field experiments done with African elephants. In 2006, Karen McComb and her team at the University of Sussex found that African elephants showed more interest in skulls and tusks than in any other stimuli.

But the mechanisms might not have been the same.

According to Gonçalves, wild elephants probably interacted with these skulls based on past experiences. But elephant skulls lose many important facial traits such as ears and the trunk which are important for their communication.

“Chimpanzee skulls, on the other hand, still retain the general facial arrangements,” he adds.

To test their hypotheses about chimpanzees’ visual attention, Gonçalves and his team conducted a series of three experiments using an eye-tracker to map exactly where the chimpanzees are looking and for how long.

The results show that not only do the chimpanzees show the most preference for chimpanzee faces, they also show a similar bias towards chimpanzee skulls, looking the longest and most intently at the teeth.

Although the research team does not conclusively determine whether chimpanzees ‘know’ they are holding a Yorick in their hands, there is room for speculation about what is going on in the chimpanzees’ minds.

“When a wild chimpanzee finds a skull, it will likely be attentive to it like no other inanimate object in his surroundings as it bears a resemblance to one of its own,” Gonçalves concludes.

The paper “Staring death in the face: Chimpanzees’ attention towards conspecific skulls and the implications of a face module guiding their behaviour” appeared 23 March 2022 in Royal Society Open Science, with doi: 10.1098/rsos.210349

Staring death in the face: Chimpanzees’ attention towards conspecific skulls and the implications of a face module guiding their behaviour

The authors have declared no competing interests.