Alana Foundation gift to support study of Down syndrome 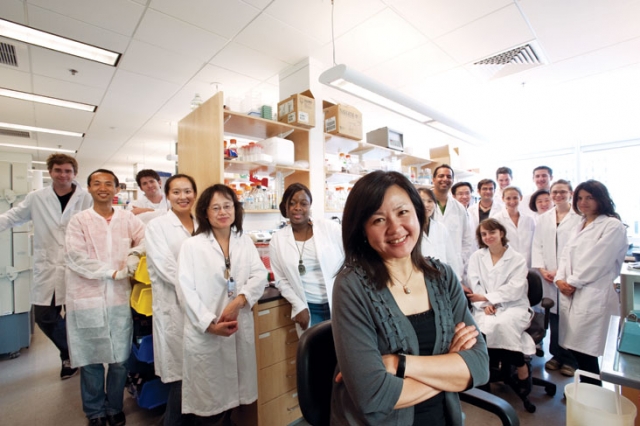 Professor Li-Huei Tsai, director of the Picower Institute for Learning and Memory at MIT, and colleagues

MIT and Case Western Reserve University have each received $1.7 million from Brazil’s Alana Foundation to develop a collaboration that will help advance our understanding of Down syndrome. The work could ultimately lead to new therapies for the genetic condition, improving the quality of life for persons born with it.

"Ana Lucia Villela and Marcos Nisti, president and vice president of the Alana Foundation, speak about their goals for this collaboration with a kind of passion and urgency that feel very familiar to us at MIT," says MIT President L. Rafael Reif. “In the spirit of MIT’s core mission, they seek to apply the latest science to improve the lives of those born with Down syndrome, and to drive breakthroughs in the understanding of both Down syndrome and Alzheimer’s disease, with a potentially transformative impact. We are honored that the Alana Foundation has chosen to partner with MIT — and we are eager to get started."

The two teams will be led by Professor Li-Huei Tsai, director of the Picower Institute for Learning and Memory at MIT, and Professor Alberto Costa, director of the Intellectual Disability Program in the Research Institute for Children’s Health at Case Western Reserve University School of Medicine. Tsai is a neuroscientist specializing in neurodegenerative and memory research who has made pioneering contributions to the understanding of both normal cognitive function and the cognitive decline that occurs in diseases like Alzheimer’s.

Costa has spent nearly two decades investigating the biological underpinnings of Down syndrome and searching for potential drug therapies to enhance cognition and prevent the development of Alzheimer’s-related dementia in persons with this condition. He is also working to bring this research into the clinical arena.

"There is tremendous opportunity to benefit from our combined strengths — MIT's ongoing research to understand the aging brain, and Case Western Reserve's expertise in Down syndrome," says Tsai, who is also the Picower Professor of Neuroscience in MIT’s Department of Brain and Cognitive Sciences. "The Alana Foundation's support will allow us to work together to accelerate research projects with the potential to develop treatments that will improve the quality of life for individuals with Down syndrome."

“This is a unique collaborative effort that makes the best possible use of the complementary expertise of our research teams. Professor Tsai and I feel privileged to be the recipients of this generous gift from the Alana Foundation,” says Costa, a professor of pediatrics at Case Western Reserve.

The collaboration will focus initially on four project areas. First, Tsai and Costa will develop personalized human stem cell models of Down syndrome called iPSCs (induced pluripotent stem cells). iPSCs are nonspecialized cells that can be induced to develop into many different types of mature cells, such as neurons. Researchers can then study these “induced” human neuronal models of Down syndrome to better understand the biology of the condition. Second, the team will use this human neuronal model of Down syndrome to test the benefits of potential new therapeutic treatments. This could provide a preclinical drug screening approach that is personalized to individual conditions.

In another project, Tsai and Costa will breed mice that are genetically protected from Alzheimer's disease with mice that mimic Down syndrome to determine if the same pathological processes that are at work in Alzheimer’s disease occur in Down syndrome. Tsai has recently shown that limiting the expression of the protein p25 in mouse models of Alzheimer’s disease can slow the progression of many hallmark symptoms and cognitive impairments of the condition. Therefore, the teams will explore whether the mice that mimic Down syndrome could benefit from the same protein regulation. The model will also be used to test the effectiveness of Tsai’s newly discovered class of cognitive enhancers, called HDAC inhibitors, which can benefit the cognitive function of mouse models of Alzheimer’s disease.

In a fourth project, the teams will use a new 3-D imaging technique invented by Kwanghun Chung, an assistant professor of chemical engineering at MIT, to study the circuits, anatomy, and any pathologies of the mouse model of Down syndrome, as well as human tissue models of the condition.

Together, these efforts have the potential to radically influence Down syndrome research, and significantly improve the odds that new and effective therapies will be developed in the years to come, according to Tsai and Costa.

Alana is a Brazilian nonprofit with three distinct units: Instituto Alana and Alanapar, both located in Brazil, and the Alana Foundation, headquartered in the United States. The Alana Foundation is a fully philanthropic foundation created to invest in cutting-edge and innovative research capable of changing the world.