Chestnut Hill, Mass (7/17/2022) – Air pollution remains a silent killer in Massachusetts, responsible for an estimated 2,780 deaths a year and for measurable cognitive loss in Bay State children exposed to fine particulate pollutants in the air they breathe, according to a new study by researchers at Boston College’s Global Observatory on Planetary Health. 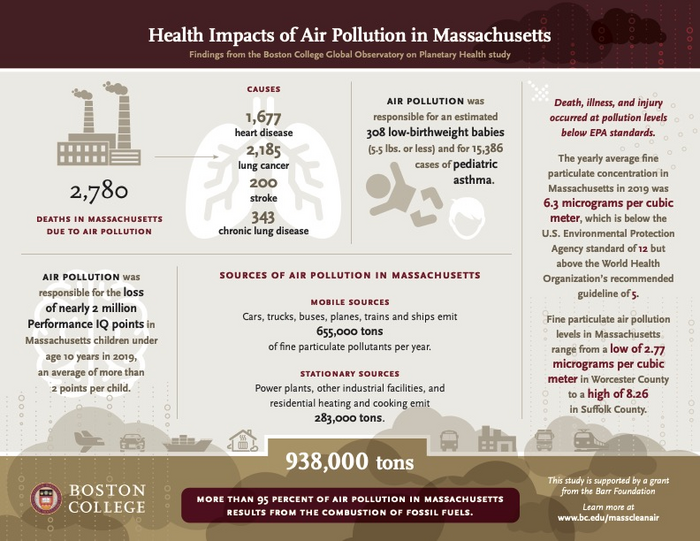 Chestnut Hill, Mass (7/17/2022) – Air pollution remains a silent killer in Massachusetts, responsible for an estimated 2,780 deaths a year and for measurable cognitive loss in Bay State children exposed to fine particulate pollutants in the air they breathe, according to a new study by researchers at Boston College’s Global Observatory on Planetary Health.

The study was supported by the Barr Foundation and is the first to examine far-reaching public health consequences of air pollution in the state on a town-by-town basis. The study found air-pollution-related disease, death and IQ loss occur in every city and town regardless of demographics or income level. Highest rates were in the most economically disadvantaged and socially underserved cities and towns.

The Boston College team estimates the cumulative impact on childhood cognitive development in Massachusetts in 2019 was a loss of almost 2 million Performance IQ points, or more than 2 IQ points for the average child, according to the report, published today in the journal Environmental Health. IQ loss impairs children’s school performance and reduces graduation rates, the team noted.

“We are talking about the impacts of air pollution at a very local level in Massachusetts – not just statewide,” said lead author Boston College Professor of Biology Philip J. Landrigan, MD, director of the Observatory. “This report gives the people in every city and town the opportunity to see for themselves the quality of the air they and their families are breathing and the dangerous health implications for both adults and children as a consequence of air pollution.”

“All of these health effects occurred at pollution levels below current EPA standards,” Landrigan noted.

Town-by-town air pollution information is not typically available, given there are not enough air quality monitoring stations in the state. The team determined levels for all cities and towns using available data and computer modeling.

While Massachusetts meets federal clean air guidelines and air pollution in the U.S. has declined 70 percent since the passage of the Clean Air Act in the 1970s – when Landrigan and other scientists successfully pushed for the removal of lead from gasoline – unclean air at current levels still poses health hazards to both healthy individuals and those with other ailments or illnesses.

“We do not have the level of air pollution you see in China or India and because it is mostly invisible today people tend to forget about air pollution and we get complacent,” Landrigan said. “We hope to break through this complacency and increase awareness. Air pollution is killing 2,780 people in Massachusetts each year, nearly 5 percent of all deaths in the state, and that is a big deal. Air pollution is something we can fix. We know the steps that need to be taken to reduce fatalities and the impact on our children and grandchildren. Now citizens in every city and town across the Commonwealth need to urge our elected officials to take those necessary steps.”

More than 95 percent of air pollution in Massachusetts results from the combustion of fossil fuels. Cars, trucks, buses, planes, trains and ships produced two-thirds of pollutant emissions – 655,000 tons – in 2017, the most recent year for which data were available. Power plants, industrial facilities, and home heating and cooking produced 283,000 tons. In all, these sources emitted 938,000 tons of pollutants.

Fossil fuel combustion is also the major source of the carbon dioxide and other greenhouse gases that drive global climate change, which the researchers said should further incentivize Massachusetts to reduce air pollution and greenhouse gas emissions by transitioning to cleaner fuels.

“All of these adverse health effects occur at fine particulate matter pollution levels below the U.S. Environmental Protection Agency’s current annual standard of 12 micrograms per cubic meter,” said Landrigan. “So even for a state like Massachusetts, which registered below that standard, air pollution is a formidable public health threat that needs urgently to be addressed.”

The report recommends the following solutions:

A web-based application developed by the Observatory offers a searchable database for air pollution impacts in each of the state’s 351 cities and towns. It is available at www.bc.edu/masscleanair.