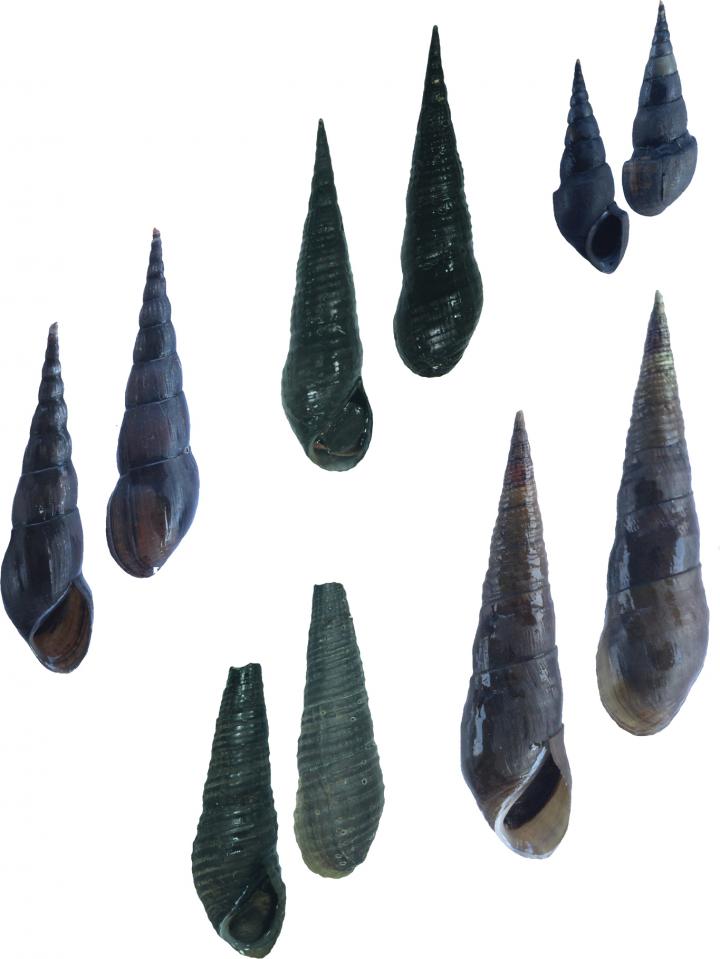 Parasitic flatworms known as agents of food-borne zoonoses were confirmed to use several species of thiarid snails, commonly found in freshwater and brackish environments in southeast Asia, as their first intermediate host. These parasites can cause severe ocular infections in humans who consume raw or improperly cooked fish that have fed on infected snails. The study, conducted in South Thailand by Thai and German researchers and led by Kitja Apiraksena, Silpakorn University, is published in the peer-reviewed open-access journal Zoosystematics and Evolution.

“Trematode infections are major public health problems affecting humans in southeast Asia,” explain the scientists. “Trematode infections depend not only on the habit of people, but also on the presence of first and second intermediate host species, resulting in the endemic spread of parasites, such as intestinal and liver flukes in Thailand”.

The snails of concern belong to the genus Stenomelania, have elongated and pointed shells and can be found near and in the brackish water environment of estuaries in the Oriental Region, from India to the Western Pacific islands. Worryingly enough, science does not know much else about these snails to date. Further, these species are hard to distinguish from related trumpet snails, because of the similarities in their shell morphology.

In order to provide some basic knowledge about the parasitic worms in Thailand and neighbouring countries, the research team collected a total of 1,551 Stenomelania snails, identified as four species, from streams and rivers near the coastline of the south of Thailand in Krabi, Trang and Satun Provinces. Of them, ten were infected with trematodes. The parasites were found at seven of the studied localities and belonged to three different species. In Krabi Province, the researchers observed all three species.

Speculating on their presence, the scientists suspect that it could be related to the circulation of sea currents, as the flow of water along the Andaman coast is affected by the monsoon season.

In conclusion, the researchers note that it is a matter of public health that further research looks into the biodiversity and biology of these snails, in order to improve our knowledge about the susceptibility of Stenomelania snails to food-borne zoonotic.

“This finding indicated that the resulting parasitic diseases are still largely neglected in tropical medicine, so further studies should be performed on the prevalence of various trematode-borne diseases in locations with snail occurrences in Thailand,” they say.