Despite great progress with SARS-CoV-2 vaccines, there is still a need to accelerate vaccination in low- and middle-income countries and a need for more effective vaccine strategies in older adults, who tend to have weaker immune responses to vaccination. Research led by Boston Children’s Hospital, published today in Science Translational Medicine, describes a protein-based vaccine, paired with custom adjuvants, that can be manufactured at scale. In testing in immune cells from older adults and in mice, it showed efficacy potentially equivalent to that of current mRNA vaccines. 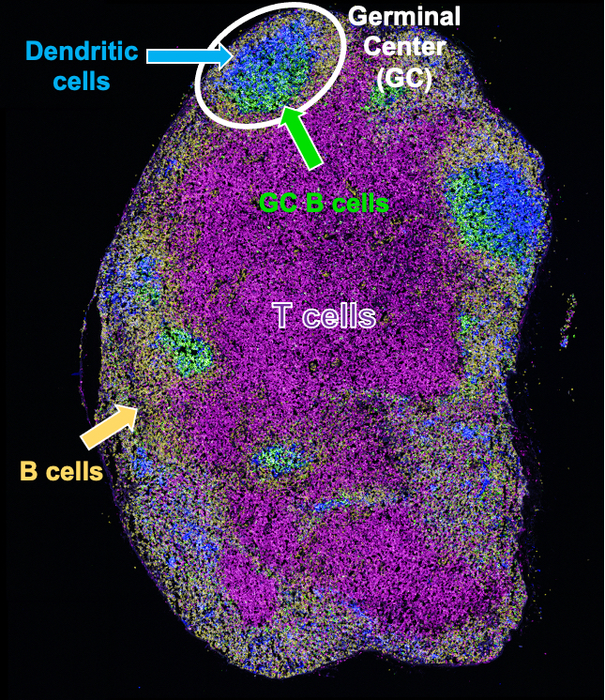 Despite great progress with SARS-CoV-2 vaccines, there is still a need to accelerate vaccination in low- and middle-income countries and a need for more effective vaccine strategies in older adults, who tend to have weaker immune responses to vaccination. Research led by Boston Children’s Hospital, published today in Science Translational Medicine, describes a protein-based vaccine, paired with custom adjuvants, that can be manufactured at scale. In testing in immune cells from older adults and in mice, it showed efficacy potentially equivalent to that of current mRNA vaccines.

The formulation, created by vaccinologists in the Precision Vaccines Program at Boston Children’s, combines the part of the viral spike protein that binds to people’s cells, known as the receptor-binding domain (RBD), with two vaccine adjuvants, molecules that boost the immune response.

“The RBD is a key SARS-CoV-2 vaccine target, but the RBD protein by itself is poorly immunogenic,” says David Dowling, PhD, co-senior author on the paper with Ofer Levy, MD, PhD, director of the Precision Vaccines Program, and Matthew B. Frieman, PhD, of the University of Maryland School of Medicine. “That’s why people have used the full spike protein, which is harder to produce at scale. With the adjuvants we selected, we were able to make an RBD-based protein vaccine as effective as a full spike-based mRNA vaccine.”

There are currently at least a half-dozen candidate protein vaccines against SARS-CoV-2, using different adjuvants. The new study was unique in systematically screening multiple adjuvants and focusing on immune responses in aged human cells and aged mice.

“We compared a wide range of adjuvant molecules head-to-head in different combinations across multiple platforms, in both a young and older immune setting,” says Levy. “No one had done this before with a specific focus on aged populations.”

To test the candidate vaccine-adjuvant combinations, the team recruited adults over age 65 across the Boston area, including members of Levy’s synagogue, to donate their white blood cells. Aged mice were vaccinated at Boston Children’s and directly challenged with live SARS-CoV-2 at a Biosafety Level 3 facility at the University of Maryland.

“We found that the RBD subunit formulated with the adjuvants aluminum hydroxide and CpG was a successful combination, equivalent to, and in some instances exceeding current mRNA vaccines,” says Etsuro Nanishi, MD, PhD, who is co-first author on the paper with Francesco Borriello, MD, PhD.

CpG is known to stimulate Toll-like receptors in the innate immune system, sparking a larger immune response. Aluminum hydroxide, the most commonly used adjuvant in current vaccines, also helps keep vaccine antigens in the body for a longer period of time so that the immune system can better detect them.

The team was able to get an early jump on developing the vaccine formulation. A team led by co-authors Maria Elena Bottazzi, PhD and Peter Hotez, MD, PhD, co-directors of the Texas Children’s Hospital Center for Vaccine Development at Baylor College of Medicine, already had experience producing RBD proteins, leveraging prior work on the original SARS virus.

“We reached out to get the RBD protein literally the day after SARS-CoV-2 was first sequenced,” says Levy. “Because we were working on coronavirus vaccines, Boston Children’s Hospital and Harvard Medical School allowed us to stay open throughout the pandemic.”

In addition to being much easier to manufacture at scale than mRNA vaccines, the new formulation is unlikely to need the extreme cold storage required by mRNA vaccines, which would enable its use in more settings. Levy notes that similar vaccine formulations, made up of the same combination of elements, are advancing into late-stage clinical trials.

Optimized RBD-based vaccines are now being evaluated at an accelerated pace. Another recently reported vaccine approach developed at Boston Children’s and tested in mice also uses the RBD protein with a different method of boosting the immune response.

“Global deployment of vaccines that can protect across multiple age groups is still urgently needed to end the COVID-19 pandemic, especially in low- and middle-income countries,” notes Frieman. “This work on how adjuvant discovery can facilitate vaccine induced protection against viral infection is an important step towards this.”

Boston Children’s Hospital is ranked the #1 children’s hospital in the nation by U.S. News & World Report and is the primary pediatric teaching affiliate of Harvard Medical School. Home to the world’s largest research enterprise based at a pediatric medical center, its discoveries have benefited both children and adults since 1869. Today, 3,000 researchers and scientific staff, including 10 members of the National Academy of Sciences, 25 members of the National Academy of Medicine and 10 Howard Hughes Medical Investigators comprise Boston Children’s research community. Founded as a 20-bed hospital for children, Boston Children’s is now a 415-bed comprehensive center for pediatric and adolescent health care. For more, visit our Answers blog and follow us on social media @BostonChildrens, @BCH_Innovation, Facebook and YouTube.