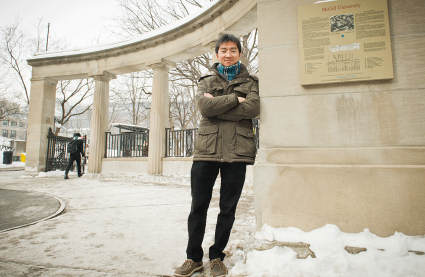 Much of the influence on climate from air pollution in East Asia is driven by consumption in the developed countries of Western Europe and North America, according to research co-led by McGill University atmospheric scientist Yi Huang.

In a paper published online this week in Nature Geoscience, Huang and colleagues from China, the U.S. and U.K. report that international trade shifts the climate impacts of aerosols — solid or liquid particles suspended in air — from net consuming countries to net producing countries.

Compared with greenhouse gases such as carbon dioxide, aerosols emitted through industrial production or fossil-fuel burning typically remain in the atmosphere for relatively short periods: just days to weeks. As a result, their influence on climate is usually strongest in the region where they are emitted.

”Our study revealed a strong, yet little-recognized link among consumption, trade and environmental and climate consequences,” says Prof. Huang. ”Although global pollution is largely generated in developing countries, it is foreign demand that drives much of the goods production and associated pollution.”

Aerosols in the atmosphere scatter or absorb solar radiation, thus contributing to climate change — an effect known as “radiative forcing”. Some, such as sulfate aerosols, can have a cooling effect; others, such as black carbon, have a warming effect. Previous studies had shown the role of international trade in redistributing aerosols, but the climate effect of this had not been quantified.

The researchers found that in East Asia, a large net exporter of emissions-intensive goods, radiative forcing due to the production of goods is much stronger than consumption-related forcing. For net importing countries in Western Europe, North America and Oceania, they found the opposite pattern: radiative forcing related to consumption of goods is much greater than production-related forcing.

Despite stringent emissions policies in the developed countries, global emissions of many aerosol pollutants have increased in recent years. As a result, ”efforts may need to be extended to consider emissions embodied in trade,” the researchers write. For example, technology-transfer programs developed under the Kyoto Protocol could be extended to include aerosol pollution as well as greenhouse gases. Policymakers in developing countries might also consider the extent to which the costs of stricter local environmental regulations could be passed on to consumers in net importing regions, the researchers suggest.

”A rational person may ask what is the optimal way to distribute goods production such that the overall global pollution and climate forcing is minimized,” Huang adds. ”This important question has yet to be addressed, but could be through the framework and ideas laid out in this study.”