Researchers at UC San Diego’s Scripps Institution of Oceanography have discovered a novel molecular process that corals use to control the subcellular environment of the algae that live inside them. 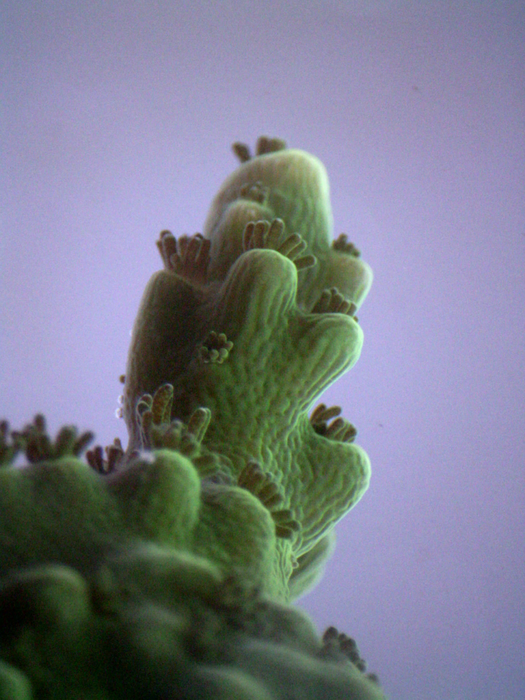 Researchers at UC San Diego’s Scripps Institution of Oceanography have discovered a novel molecular process that corals use to control the subcellular environment of the algae that live inside them.

A specialized protein controls the fluctuating day-to-night transfer of nitrogen and carbon dioxide through the coral’s cellular membranes to the algae. The process is important because the coral and algae live in a mutually beneficial relationship called symbiosis. Although the team expected to find the protein, they could not have predicted the day-night changes in the intracellular areas they observed.

“We show that the interface between the animal hosts and the plants that live inside them is a dynamically controlled microenvironment,” said Angus Thies, a doctoral student who works in the laboratory of Scripps Oceanography marine physiologist Martin Tresguerres. Thies and his co-authors, who include scientists at the University of Manitoba in Canada, describe the first direct observations of the cellular interface between corals and their symbiotic algae in the March 11 issue of Science Advances. The study was supported by the National Science Foundation (NSF) through a grant to Tresguerres and a fellowship to Thies.

Until recently, the findings reported in Science Advances would have been nearly impossible to obtain. Tresguerres’s group already had invested years in pioneering how best to prepare corals for microscopy science. What clinched the achievement, though, was the team’s acquisition of an apparatus known as a laser confocal super-resolution system that was funded by the Arthur M. and Kate E. Tode Research Endowment in Marine Biological Sciences at UC San Diego.

This system permitted the team to image the coral membrane that surrounds the algae at a resolution more than double that of the lab’s previous microscope. The new system can isolate features only 120 nanometers apart. A human hair, by comparison, is 90,000 nanometers thick.

“Decades of studies show that corals seem to regulate how much nitrogen they give to their algae,” Tresguerres said. But if the algae receive too much nitrogen, they may grow and multiply too quickly, disrupting the symbiosis.

“Just like humans, coral health and disease can be tracked to the cellular level. When things go right on the cellular level, the coral thrives. And when things go wrong, it usually leads to malfunction or disease, potentially including ‘bleaching.’ What we call the symbiosis interface might be the most important interface, the most important membrane, on the entire reef,” Tresguerres said.

Symbioses form important biological interactions in many living systems. For example, humans have a symbiotic relationship with the bacteria that fill our digestive tract. But there’s a difference.

“In humans, bacteria live outside our cells; for example, in the inside of our intestines and on our skin. But in corals, these algae live inside cells of the host animal itself,” Thies said. “It’s a very tight space. It’s like having a roommate forever and you hope it’s a really good roommate. You want to keep everyone as happy as possible.”

At first glance, corals might look like colorful rocks that sprout pretty little polyps. “They are, in fact, among the most important animals on Earth,” Thies said. Approximately one billion people rely on coral reef ecosystems either directly or indirectly for their food and yet scientists know very little about how corals function at the cellular level.

The Science Advances study identified a cellular mechanism that mediates nitrogen delivery to the symbiotic algae during normal conditions. This is a significant finding because, to understand what happens when a process goes wrong, scientists first need to establish how it works in healthy corals. But how is this process altered by climate change or pollution?

“Perhaps, under certain conditions of climate change, this mechanism is disrupted and can lead to bleaching because the algae do not have enough or they have too much nitrogen,” Tresguerres said. “That opens the door for a lot of research, both by us and also other labs.”

Thies, who received his undergraduate degree in marine biology at UC San Diego in 2017, began working on this project as an undergraduate student in Tresguerres’s laboratory. He has continued the project as an NSF Graduate Fellow and a Scripps Oceanography Doctoral Scholar Fellow.

“Corals are not easy organisms to work with,” Thies said. “Corals require a lot of aquarium care because they’re complicated symbiotic animals. Sometimes, they’re hard to keep happy.” But a team of six UC San Diego undergraduate and graduate students did exactly that, earning an acknowledgment in the Science Advances paper for their efforts.

Although the Tresguerres lab studies many different organisms, what they find in one organism  often appears in another one no matter how distantly related. Even though corals, sharks, and algae may share some of the same enzymes—highly specialized proteins—, each organism puts them to different uses. Even two separate coral species that dwell at the same depth might employ quite different adaptations.

Proteins and enzymes serve as cellular building blocks that Tresguerres compared to LEGO® bricks. In a coral, many enzymes support symbiosis. Similar enzymes in an Osedax worm, which feeds on whale carcasses, help the worm eat through bone. And in shark and stingray gills, similar enzymes are involved in maintaining blood acidity within healthy levels.

“I find Evolution fascinating, especially at the cellular level,” Tresguerres said. “The proteins are the same, but then they partner with other proteins or they’re in different cellular compartments and put in a wildly different function.”

Besides Thies and Tresguerres, the research team included Alex R. Quijada-Rodriguez, Haonan Zhouyao, and Prof. Dirk Weihrauch of the University of Manitoba, Canada.