Sophisticated analysis of a rock sample taken from the Moon during the Apollo 17 mission revealed new information about the complex cooling and evolutionary history of the Moon. The findings, from University of Hawai‘i (UH) at Mānoa researchers, were published today in Nature Communications. 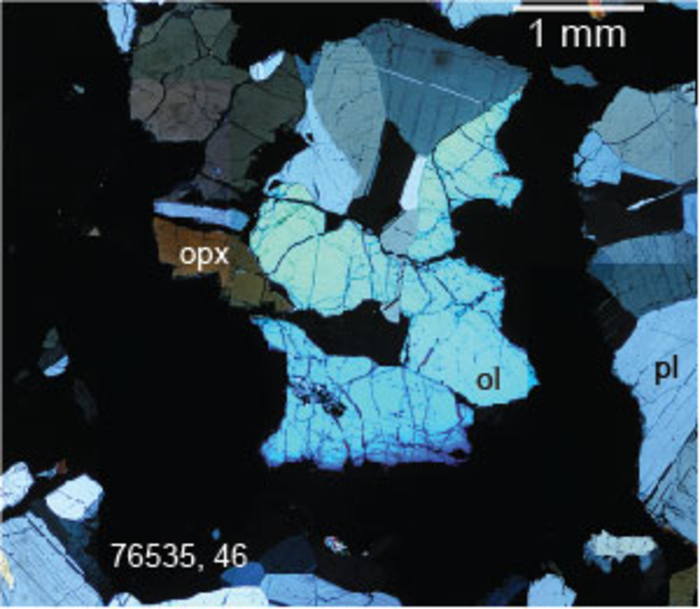 Sophisticated analysis of a rock sample taken from the Moon during the Apollo 17 mission revealed new information about the complex cooling and evolutionary history of the Moon. The findings, from University of Hawai‘i (UH) at Mānoa researchers, were published today in Nature Communications.

Apollo 17 astronauts collected the rock sample troctolite 76535 from the Moon’s surface in 1972, and it remains one of the most scientifically valuable samples of the Moon due to its pristine nature. Further, the rock type is widespread on the Moon and likely contains important clues to understanding lunar formation.

William Nelson, lead author of the study and Earth Sciences graduate student in the UH Mānoa School of Ocean and Earth Science and Technology (SOEST), and co-authors used a specialized electron microprobe to perform high-resolution analysis of troctolite 76535.

“Previous reports suggest the minerals in the Apollo 17 sample were chemically homogeneous,” said Nelson. “Surprisingly, we found chemical variations within crystals of olivine and plagioclase. These heterogeneities allow us to constrain the earliest, high-temperature cooling histories of these minerals using numerical models.”

“The simulations revealed that these heterogeneities could only survive a relatively short period of time at high temperatures,” said Nelson.

The diffusion patterns preserved in the mineral grains and observed with the microprobe were consistent with a rapid cooling history of no more than 20-million-years at high temperatures. The finding challenges previous estimates of a 100-million-year cooling duration and supports initial rapid cooling of magmas within the lunar crust.

“This is changing our outlook on how an important suite of lunar rocks formed,” said Nelson.

To reconcile high-temperature cooling rates with the generally accepted view of the way in which these rocks formed, the research team proposed that perhaps this rock type is formed by a process called reactive infiltration wherein a melt interacts with rock—changing its chemical and physical makeup.

The study also demonstrates the value of re-examining previously analyzed samples using modern techniques and how quickly new data can reshape our understanding of planetary evolution.

To better understand the observed chemical heterogeneity, the research team is currently investigating how quickly phosphorus can diffuse in olivine crystals. Additionally, they are searching for similar heterogeneities in other Apollo samples.