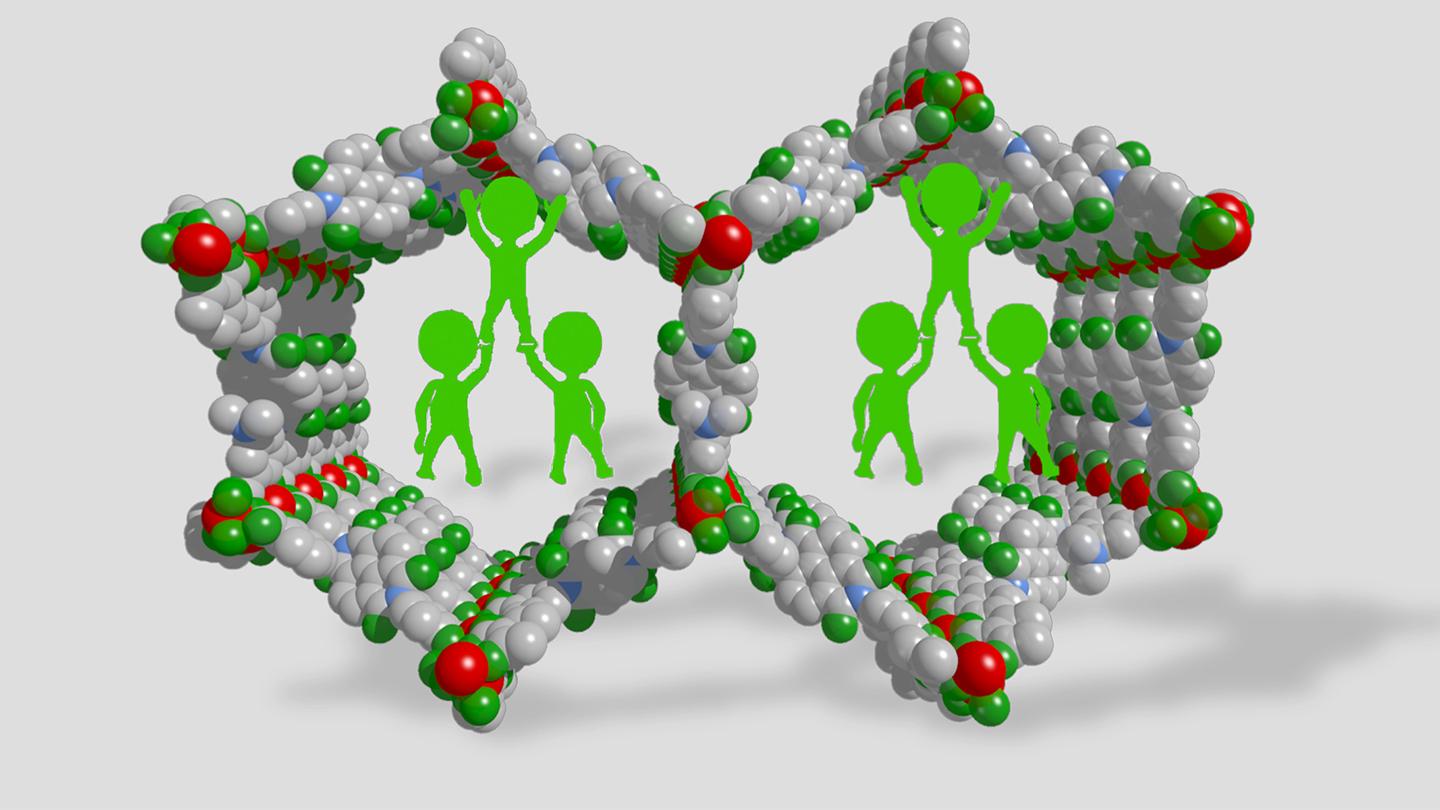 Metal-organic frameworks (MOFs) are a special class of sponge-like materials with nano-sized pores. The nanopores lead to record-breaking internal surface areas, up to 7800 m2 in a single gram. This feature makes MOFs extremely versatile materials with multiple uses, such as separating petrochemicals and gases, mimicking DNA, hydrogen production and removing heavy metals, fluoride anions, and even gold from water – to name a few.

One of the key features is pore size. MOFs – and other porous materials – are classified based on the diameter of their pores: MOFs with pores up to 2 nm in diameter are called “microporous”, and anything above that is called “mesoporous”. Most MOFs today are microporous, so they are not useful in applications that require them to capture large molecules or catalyze reactions between them – basically, the molecules don’t fit the pores.

So more recently mesoporous MOFs have come into play, because they show a lot of promise in large-molecule applications. Still, they aren’t problem-free: when the pore sizes get into the mesoporous regime – they tend to collapse. Understandably, this reduces the internal surface area of mesoporous MOFs and, with that, their overall usefulness. Since a major focus in the field is finding innovative ways to maximize MOF surface areas and pore sizes, addressing the collapsing problem is top priority.

Now, Dr Li Peng a postdoc at EPFL Valais Wallis has solved the problem by adding small amounts of a polymer into the mesoporous MOFs. Because the polymer pins the MOF pores open, adding it dramatically increased accessible surface areas from 5 to 50 times. The study was led by the research group of Wendy Lee Queen, in collaboration with the labs of Berend Smit and Mohammad Khaja Nazeeruddin at EPFL’s Institute of Chemical Sciences and Engineering (ISIC).

After adding the polymer to the MOFs, their high surface areas and crystallinity were maintained even after heating the MOFs at 150°C – temperatures that would previously be unreachable due to pore collapse. This new stability provides access to many more open metal coordination sites, which also increases the reactivity of the MOFs.

In the study, published in the Journal of the American Chemical Society, two PhD students, Sudi Jawahery and Mohamad Moosavi, use molecular simulations to investigate why pores collapse in mesoporous MOFs in the first place, and also propose a mechanism to explain how polymers stabilize their structure on a molecular level.

“We envision that this method for polymer-induced stabilization will allow us to make a number of new mesoporous MOFs that were not before accessible due to collapse,” says Queen. “Hence, this work can open up new, exciting applications involving the separation, conversion, or delivery of large molecules.”