Ants are social insects and the Solenopsis invicta species —known as the fire ant— is no exception. The social interactions of this invasive insect, which comes from South America, are framed within the context of the theory of Active Matter, which would explain the ants’ group behaviour as a reaction to the intrinsic mechanisms in the system. This is one of the conclusions of the article published in the journal Science Advances by researchers Alberto Fernández-Nieves and Caleb Anderson, from the Faculty of Physics of the University of Barcelona, and Guillermo Goldsztein, from the Georgia Institute of Technology (United States). 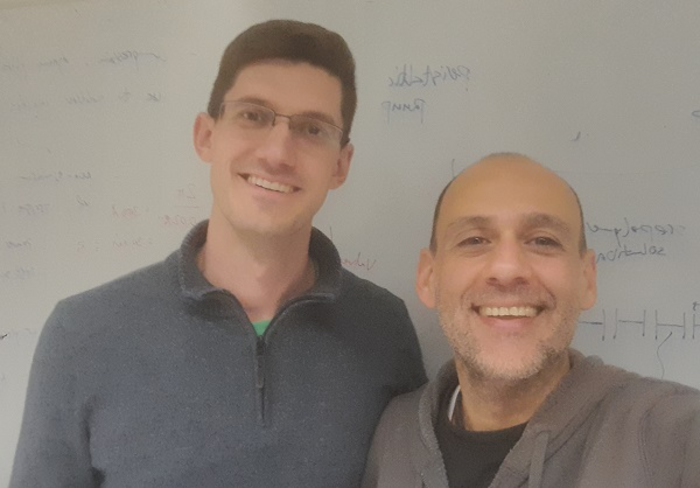 Ants are social insects and the Solenopsis invicta species —known as the fire ant— is no exception. The social interactions of this invasive insect, which comes from South America, are framed within the context of the theory of Active Matter, which would explain the ants’ group behaviour as a reaction to the intrinsic mechanisms in the system. This is one of the conclusions of the article published in the journal Science Advances by researchers Alberto Fernández-Nieves and Caleb Anderson, from the Faculty of Physics of the University of Barcelona, and Guillermo Goldsztein, from the Georgia Institute of Technology (United States).

The study reveals that density is essential for the ants to experience activity cycles and undergo periods in which the group of insects moves collectively. Under conditions of high density, these activity cycles are displayed in a surprising way when the ant community is organized into a vertical column, creating activity waves that propagate upwards.

The fire ant as a model in physics

The fire ant, a hymenopteran with a high reproductive and dispersal ability, has been used as a reference model for studying active systems at high density. Under different conditions, the ant collective experiences what is known as activity cycles: the group of ants changes back and forth from a situation where many ants are stationary, to a situation in which practically all the ants are moving.

“Studying dense active systems in a lab is not trivial. From a physical perspective, ants are considered active particles that use chemical energy to move. They can be easily concentrated to create a dense collective that we can use to address active matter questions”, notes Alberto Fernández-Nieves, ICREA professor at the Department of Condensed Matter Physics and the UB Institute of Complex Systems (UBICS).

Active matter, specifically, is based on particles that can self-propel, and that as a result, move due to local consumption of energy, unlike atomic or colloidal systems, whose constituents move as a result of temperature.

From social attraction to collective behavior

There are two large behaviours that emerge in active matter: the first is the transition into a state in which the set of particles moves in the same direction (collective mode), a behaviour usually related to bird flocks and fish schools. The other manifests when the motility of the particles decreases with their pair-separation distance. In this case, as the particles get closer, they stop moving, a result that can be understood as an attraction between them. Under certain conditions, this attraction can lead to the formation of aggregates, and in some cases, to the separation of a phase formed by stationary ants and a phase formed by moving ants.

According to the study, density is crucial for the ant collective to change between these behaviours. “With a lower density, the phase we observe is that related to social attractions”, the authors say. “Changes to the collective motion phase are seen only when the density is high enough. This explains why the waves are always generated near the base of the ant columns, where the density is higher”.

The study states that the ants’ social attraction —i.e. their interaction— can be explained as an induced phenomenon due to a declining motility with ant-ant separation. However, at high densities, this attraction disappears and the ant community adopts a collective group mode that results in the activity waves that propagate upwards.

“These density and activity waves reflect that the states of the activity cycles in which all the ants are moving correspond to a collective phase, which is similar to the described organized phase, for instance, in flocks of birds, schools of fish or groups (packs or herds) of animals”, the experts note.

Ants’ collective mode in the environment

In nature, the collective mode of fire ants can be seen under different conditions. These insects, which come from an area with abundant rainfalls and floods, have evolved to overcome these extreme episodes through these activity cycles.

“In order to survive these phenomena, fire ants build rafts in which all individuals cluster together; therefore, the density of the raft is high. According to previous studies, when they are in the rafts, the ants undergo inactive periods where the shape of the raft is circular, and others in which there is more movement. In this last case, the shape of the raft becomes characterized by the formation of collective protrusions with finger-like shape”, the authors note.

During the inactive periods, the raft would behave as an elastic solid, which helps resist the impact of objects that are washed away by the rain. At the same time, the formation of the finger-like shape, allows the ants to search for solid ground. If they find it, they migrate to land, and if they don’t, they group together again and continue these cycles from time to time until they do.

“Therefore, we think that periods with movement that involve the formation of fingers are similar to the collective mode we observe in our experiments and which generates the ant waves in the vertical columns”, conclude the authors.

The variations in ant aggregation state have implications in the material properties. The authors explained that in previous studies, they “found that the mechanical properties changed drastically depending on the state of the ant collective. In attraction-dominated phases, the behaviour was similar to that of an elastic solid. In contrast, in active phases, the community reorganizes itself at the particle level to somewhat flow as a liquid”.

“If analysed as an active material, the ant community can change the mechanical behaviour through changes in their activity. In material science, this is typically achieved by changing the structure of the material. In the case of ants, this can occur by being far from equilibrium. The solid-to-liquid transition is a result of internal mechanisms that bring the system out-of-equilibrium and that reminds of the activity of active matter particles. There are no relevant structural changes; the dense ant communities are always disordered. This behaviour reminds us of the character in the film Terminator, who spontaneously changes from liquid to solid. In this sense, and despite its complexity, the Terminator in the film is also active mater”, conclude the researchers.