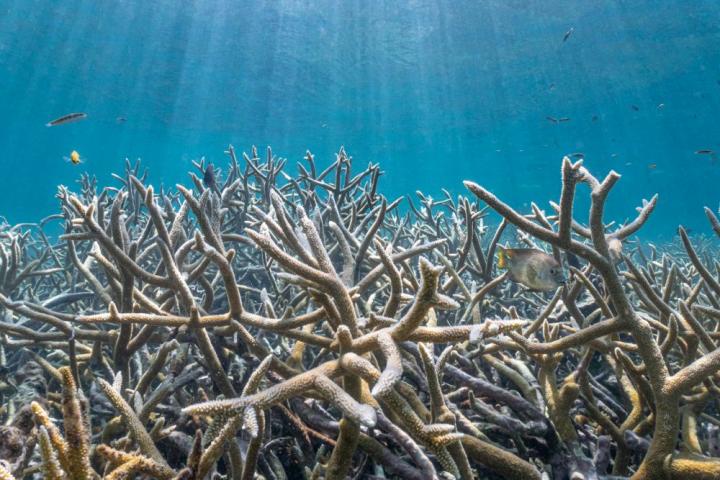 Coral Gardens Reef in Belize remains a refuge for Acropora spp. coral despite widespread devastation in other areas of the western North Atlantic/Caribbean, according to a study published September 30, 2020 in the open-access journal PLOS ONE by Lisa Greer from Washington and Lee University, Virginia, USA, and colleagues.

Once a key coral species providing the architectural framework for sprawling coral reef structures across the tropical western North Atlantic/Caribbean region, Acropora spp. coral populations have dramatically declined since the 1950s, and are now increasingly rare. Understanding the resilience and longevity of the remaining Acropora reefs in this area is critical to conservation efforts.

In order to test whether one of the largest populations of extant Acropora cervicornis in the western Caribbean was recently established (post-1980s) or a longer-lived, stable population, the authors collected 232 samples of premodern and recently dead A. cervicornis coral skeleton material across 3 sites at Coral Gardens Reef, Belize, using a subset of these samples for radiometric as well as high-precision uranium-thorium dating. Sample sites were chosen using a new genetic-aging technique to identify key sites and minimize damage to the living coral.

The data revealed coral samples ranging in age from 1910 (based on carbon dating) or 1915 (based on thorium dating) to at least November 2019; Greer and colleagues were also able to determine that Coral Gardens Reef has been home to consistent and sustained living A. cervicornis coral throughout the 1980s and up to at least 2019. While the authors cannot exclude the possibility of short gaps in the presence of A. cervicornis prior to 1980, the radiometric ages and continuous coral growth patterns found at the sample sites strongly suggests that Acropora coral has been growing and thriving at Coral Gardens for over 100 years.

Though the results from this study are not sufficient to determine exactly why this site seems to be a refuge for Acropora coral–Coral Gardens has been subject to the same increases in temperature and tropical storm/hurricane activity as reefs in the region with devastated coral populations, and the genetic diversity of Acropora is not unusually high–the findings here may be key to efforts to grow, preserve, conserve, and re-seed Caribbean reefs, as is identifying similar coral refuge sites in the area.

The authors add: “Now that we have identified an exceptional refuge for Caribbean Staghorn corals, we hope to better determine, in collaboration with reef scientists with many additional interests and expertise, the sources for success at Coral Gardens.”

Funding: This work was supported by the National Science Foundation under Grant No. NSF-REU #1358987 to LG and KW (https://keckgeology.org/), The Washington and Lee University: Johnson Opportunity Grant, Summer Research Scholar Program, R. Preston Hawkins IV Award in Geology, and Department of Geology to LG, TW, JB (https://www.wlu.edu/) and ARC DECRA Fellowship support for TC (https://www.arc.gov.au/grants/discovery-program/discovery-early-career-researcher-award-decra). The funders had no role in the study design, data collection and analysis, decision to publish, or preparation of this manuscript.

In your coverage please use this URL to provide access to the freely available article in PLOS ONE: https://journals.plos.org/plosone/article?id=10.1371/journal.pone.0239267