Modern agriculture uses a lot of plastic, especially in the form of mulch film that farmers use to cover field soils. This keeps the soils moist for crops, suppresses weeds and promotes crop growth. However, it is usually very time-​consuming and costly for farmers to collect and dispose of conventional polyethylene (PE) film after use. In addition, it isn’t possible to re-​collect all of the thin PE films, as they tear easily. This means PE-​pieces remain on and in the soil and accumulate there, because PE doesn’t degrade. 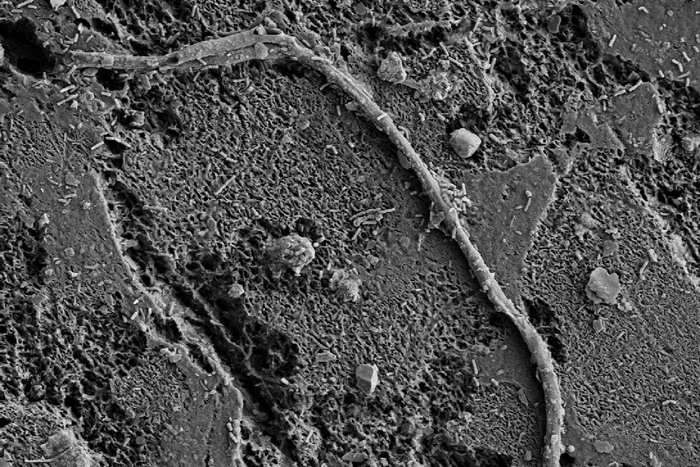 Modern agriculture uses a lot of plastic, especially in the form of mulch film that farmers use to cover field soils. This keeps the soils moist for crops, suppresses weeds and promotes crop growth. However, it is usually very time-​consuming and costly for farmers to collect and dispose of conventional polyethylene (PE) film after use. In addition, it isn’t possible to re-​collect all of the thin PE films, as they tear easily. This means PE-​pieces remain on and in the soil and accumulate there, because PE doesn’t degrade.

Biodegradable mulch film is a promising alternative, because – in contrast to PE film – it ideally does not to leave behind any polymer components in the soil environment. The biodegradable polymers it contains are deliberately designed so that microorganisms can use them to generate energy and build cell biomass. The biodegradable polymers have intended chemical “breaking points” in their backbone structure. Naturally occurring microorganisms, such as those in soil, can release enzymes into their environment that attack these points in the polymers and break them down. The small degradation products released are then taken up by the microbes and ultimately respired to form the final product, CO2.

That’s why proving CO2 formation from polymer carbon is crucial for biodegradation. Also because in addition to truly biodegradable plastics, there are falsely labelled ones based on PE containing specific additives. These films break down only into very small microplastics that are no longer visible to the naked eye. And because these aren’t degraded by microorganisms, they accumulate in the environment.

Until now based on existing methods, it hasn’t been possible to follow the process of polymer biodegradation in its entirety. But over the past few years, the Environmental Chemistry Group at ETH Zurich has developed a new approach to track and measure whether and to what degree a polymer biodegrades in a soil. Their findings have just been published in Nature Communications.

These results could change the way polymer biodegradation is studied in the future. The project also involved researchers from ETH’s Earth Sciences department and Eawag, in addition to employees from the chemical company BASF.

This new approach is based on using polymers labelled with stable carbon isotopes (13C). This labelling allows the researchers to selectively track the polymer’s 13C during biodegradation in the soil, so they can unmistakably demonstrate that biodegradation is indeed occurring. Until now, plastic biodegradability had been tested only with non-​isotopically labelled polymers. A polymer (or a plastic material consisting of one or more polymers) is certified as biodegradable if the fraction of added polymer carbon converted into CO2 exceeds a predefined level over a specific incubation period. The standard for biodegradable mulch film, for example, requires two-​year soil incubations in which at least 90 percent of the mulch film carbon is “mineralised” into CO2.

Electron microscopy image of the surface of a PBS film following incubation in a soil for six weeks: The surface of the PBS shows clear sign of degradation by colonising fungal hyphae and bacteria. (Image: Michael Zumstein)

These test methods are well established as a suitable means for detecting polymer mineralisation. However, they do not capture the full extent of the biodegradation, as they measure only CO2 formation. Consequently, researchers using today’s standard methods have been unable to detect the amount of polymer carbon remaining in the soil at the end of an incubation period. In addition, it was unclear whether this remaining carbon was present still in the form of the added polymer or whether microorganisms had already incorporated it into their biomass.

The approach developed by the ETH researchers and their colleagues eliminates these ambiguities. In their tests, they used 13C-​labelled polybutylene succinate, or PBS – a commercially important biodegradable polyester that is also used in mulch films.

The researchers were now able to selectively track the 13C in the PBS during biodegradation: in addition to determining mineralisation to 13CO2, the authors demonstrated complete mass balances for the PBS carbon by quantifying the residual amount of PBS-​derived 13C that remained in the soil after incubation.

“It was gratifying for us to see closed carbon mass balances over the 425 days of soil incubation. This showed that we can accurately determine where the polymer carbon ends up – about two-​thirds in CO2 and one-​third in soil – over these very long incubation periods,” explains the study’s lead author, Taylor Nelson, who earned his doctorate in the Environmental Chemistry Group.

The researchers also wanted to know in which form the carbon added as PBS remained in the soil. How much was incorporated into the microbial biomass and how much was still present as residual PBS?

To answer this question, the authors extracted and quantified the residual PBS from the soil at the end of the incubations. They were able to show that while most of the carbon was still present as PBS, a significant amount – 7 percent – of the added PBS carbon had been incorporated into the microbial biomass.

The ability to determine exactly how much polymer remains and how much polymer carbon has been incorporated into biomass is essential for future studies and for the development of new biodegradable polymers. “We can now systematically test for soil conditions and polymer properties that allow for complete biodegradation of the polymers to CO2 and to microbial biomass – and we can assess factors that may slow down polymer biodegradation over time,” explains Michael Sander, Professor in the ETH Environmental Chemistry Group.

This work is already underway: using the new approach, the group is currently investigating the biodegradation of further polymers in various agricultural soils, including in the field. “In this way, we want to ensure that biodegradable polymers live up to their name and don’t remain in the environment,” says Kristopher McNeill, Professor of Environmental Chemistry at ETH Zurich and head of an eponymous research subgroup.

“Replacing conventional polymers with biodegradable ones can help reduce plastic pollution, especially for applications in which polymers are used directly in the environment such that there’s a high likelihood that the polymers will remain there after use,” Sander points out.