A white dwarf living on the edge 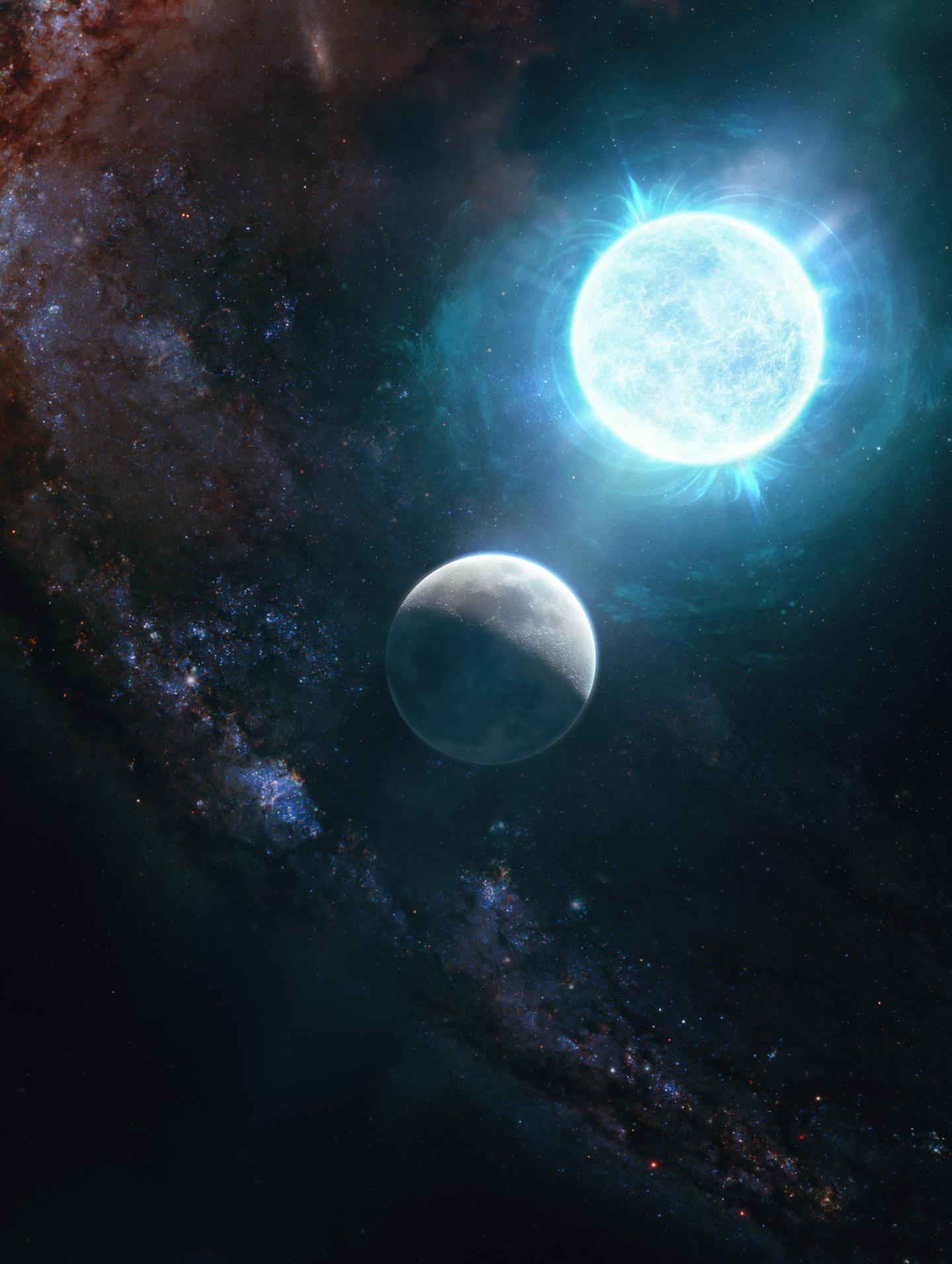 Maunakea and Haleakala, Hawai’i – Astronomers have discovered the smallest and most massive white dwarf ever seen. The smoldering cinder, which formed when two less massive white dwarfs merged, is heavy, “packing a mass greater than that of our Sun into a body about the size of our Moon,” says Ilaria Caiazzo, the Sherman Fairchild Postdoctoral Scholar Research Associate in Theoretical Astrophysics at Caltech and lead author of the new study appearing in the July 1 issue of the journal Nature. “It may seem counterintuitive, but smaller white dwarfs happen to be more massive. This is due to the fact that white dwarfs lack the nuclear burning that keep up normal stars against their own self gravity, and their size is instead regulated by quantum mechanics.”

The discovery was made by the Zwicky Transient Facility, or ZTF, which operates at Caltech’s Palomar Observatory; two Hawai’i telescopes – W. M. Keck Observatory on Maunakea, Hawai’i Island and University of Hawai’i Institute for Astronomy’s Pan-STARRS (Panoramic Survey Telescope and Rapid Response System) on Haleakala, Maui – helped characterize the dead star, along with the 200-inch Hale Telescope at Palomar, the European Gaia space observatory, and NASA’s Neil Gehrels Swift Observatory.

White dwarfs are the collapsed remnants of stars that were once about eight times the mass of our Sun or lighter. Our Sun, for example, after it first puffs up into a red giant in about 5 billion years, will ultimately slough off its outer layers and shrink down into a compact white dwarf. About 97 percent of all stars become white dwarfs.

While our Sun is alone in space without a stellar partner, many stars orbit around each other in pairs. The stars grow old together, and if they are both less than eight solar-masses, they will both evolve into white dwarfs.

The new discovery provides an example of what can happen after this phase. The pair of white dwarfs, which spiral around each other, lose energy in the form of gravitational waves and ultimately merge. If the dead stars are massive enough, they explode in what is called a type Ia supernova. But if they are below a certain mass threshold, they combine together into a new white dwarf that is heavier than either progenitor star. This process of merging boosts the magnetic field of that star and speeds up its rotation compared to that of the progenitors.

Astronomers say that the newfound tiny white dwarf, named ZTF J1901+1458, took the latter route of evolution; its progenitors merged and produced a white dwarf 1.35 times the mass of our Sun. The white dwarf has an extreme magnetic field almost 1 billion times stronger than our Sun’s and whips around on its axis at a frenzied pace of one revolution every seven minutes (the zippiest white dwarf known, called EPIC 228939929, rotates every 5.3 minutes).

“We caught this very interesting object that wasn’t quite massive enough to explode,” says Caiazzo. “We are truly probing how massive a white dwarf can be.”

What’s more, Caiazzo and her collaborators think that the merged white dwarf may be massive enough to evolve into a neutron-rich dead star, or neutron star, which typically forms when a star much more massive than our Sun explodes in a supernova.

“This is highly speculative, but it’s possible that the white dwarf is massive enough to further collapse into a neutron star,” says Caiazzo. “It is so massive and dense that, in its core, electrons are being captured by protons in nuclei to form neutrons. Because the pressure from electrons pushes against the force of gravity, keeping the star intact, the core collapses when a large enough number of electrons are removed.”

If this neutron star formation hypothesis is correct, it may mean that a significant portion of other neutron stars take shape in this way. The newfound object’s close proximity (about 130 light-years away) and its young age (about 100 million years old or less) indicate that similar objects may occur more commonly in our galaxy.

The white dwarf was first spotted by Caiazzo’s colleague Kevin Burdge, a postdoctoral scholar at Caltech, after searching through all-sky images captured by ZTF. This particular white dwarf, when analyzed in combination with data from Gaia, stood out for being very massive and having a rapid rotation.

“No one has systematically been able to explore short-timescale astronomical phenomena on this kind of scale until now. The results of these efforts are stunning,” says Burdge, who, in 2019, led the team that discovered a pair of white dwarfs zipping around each other every seven minutes.

The team then analyzed the spectrum of the star using Keck Observatory’s Low Resolution Imaging Spectrometer (LRIS), and that is when Caiazzo was struck by the signatures of a very powerful magnetic field and realized that she and her team had found something “very special,” as she says. The strength of the magnetic field together with the seven-minute rotational speed of the object indicated that it was the result of two smaller white dwarfs coalescing into one.

Data from Swift, which observes ultraviolet light, helped nail down the size and mass of the white dwarf. With a diameter of 2,670 miles, ZTF J1901+1458 secures the title for the smallest known white dwarf, edging out previous record holders, RE J0317-853 and WD 1832+089, which each have diameters of about 3,100 miles.

In the future, Caiazzo hopes to use ZTF to find more white dwarfs like this one, and, in general, to study the population as a whole. “There are so many questions to address, such as what is the rate of white dwarf mergers in the galaxy, and is it enough to explain the number of type Ia supernovae? How is a magnetic field generated in these powerful events, and why is there such diversity in magnetic field strengths among white dwarfs? Finding a large population of white dwarfs born from mergers will help us answer all these questions and more.”

The study, titled “A highly magnetised and rapidly rotating white dwarf as small as the Moon,” was funded by the Rose Hills Foundation, the Alfred P. Sloan Foundation, NASA, the Heising-Simons Foundation, the A. F. Morrison Fellowship of the Lick Observatory, the NSF, and the Natural Sciences and Engineering Research Council of Canada.

The Low Resolution Imaging Spectrometer (LRIS) is a very versatile and ultra-sensitive visible-wavelength imager and spectrograph built at the California Institute of Technology by a team led by Prof. Bev Oke and Prof. Judy Cohen and commissioned in 1993. Since then it has seen two major upgrades to further enhance its capabilities: the addition of a second, blue arm optimized for shorter wavelengths of light and the installation of detectors that are much more sensitive at the longest (red) wavelengths. Each arm is optimized for the wavelengths it covers. This large range of wavelength coverage, combined with the instrument’s high sensitivity, allows the study of everything from comets (which have interesting features in the ultraviolet part of the spectrum), to the blue light from star formation, to the red light of very distant objects. LRIS also records the spectra of up to 50 objects simultaneously, especially useful for studies of clusters of galaxies in the most distant reaches, and earliest times, of the universe. LRIS was used in observing distant supernovae by astronomers who received the Nobel Prize in Physics in 2011 for research determining that the universe was speeding up in its expansion.

The W. M. Keck Observatory telescopes are among the most scientifically productive on Earth. The two 10-meter optical/infrared telescopes atop Maunakea on the Island of Hawai?i feature a suite of advanced instruments including imagers, multi-object spectrographs, high-resolution spectrographs, integral-field spectrometers, and world-leading laser guide star adaptive optics systems. Some of the data presented herein were obtained at Keck Observatory, which is a private 501(c) 3 non-profit organization operated as a scientific partnership among the California Institute of Technology, the University of California, and the National Aeronautics and Space Administration. The Observatory was made possible by the generous financial support of the W. M. Keck Foundation. The authors wish to recognize and acknowledge the very significant cultural role and reverence that the summit of Maunakea has always had within the Native Hawaiian community. We are most fortunate to have the opportunity to conduct observations from this mountain.