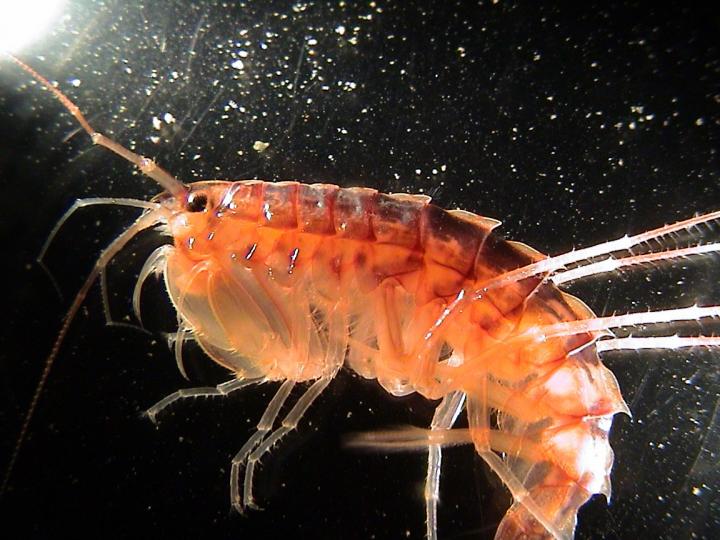 Credit: The University of Jyväskylä/Jouni Taskinen

The glacial relict amphipod Gammaracanthus lacustris only occurs in deep and cold waters. A collaborative study by University of Jyvaskyla and University of Eastern Finland produced new information on the life cycle and ecology of this rare amphipod. G. lacustris is adapted to cold water and would probably not survive in rising water temperatures due to climate change. The study has been published in the journal Freshwater Biology in September 2019.

In Finland, G. lacustris only occurs in about 20 lakes. The researchers of Universities of Jyväskylä and Eastern Finland studied the life cycle and trophic position of this amphipod in a unique study, and found that this large amphipod only inhabits the bottom layers of deep lakes with water temperatures less than 8°C. It was mainly found in depths more than 40 meters.

“G. lacustris is abundant only below 40 meters, where water temperature is permanently less than 8°C. The amphipod does not migrate to surface layers to feed even during the night, in contrast to many other crustaceans”, says postdoctoral researcher Jouni Salonen from the University of Jyväskylä.

During the many years’ of research, samples were also taken during nighttime in Lake Paasivesi, which is a part of the Lake Saimaa complex. The study estimates that there are about 50 million G. lacustris inhabiting the Lake Paasivesi. The species got landlocked in deep, large lakes in southern Finland during the melting process after the latest ice age about 10,000 years ago. Thus, G. lacustris is considered a glacial relict species similar to Saimaa ringed seal, i.e. It adapted to the new lacustrine habitat and diverged from its marine relatives.

Stable isotope analysis proved G. lacustris to be a carnivore

The amphipod is a carnivore that preys on other crustaceans, while itself being the prey for fish that inhabit the bottom layers of lakes. During the study over 600 individual G. lacustris were measured, and the largest ones were over four centimeters long. Based on the length distribution, the largest individuals were four years old.

“The female G. lacustris seem to produce young every year, since all the females longer than 25 mm were gravid, and had an embryo sack. The largest females were carrying over 200 eggs or embryos” tells Jouni Salonen.

“Especially the fatty acid content of gravid females and eggs were high, indicating that G. lacustris invests heavily on producing viable offspring. There also were differences in fatty acid composition between adult amphipods and their eggs. The stable isotope analysis indicated that G. lacustris are carnivores, that feed on zooplankton and other crustaceans”, says postdoctoral researcher Minna Hiltunen from University of Jyväskylä.

The values for nitrogen stable isotopes of G. lacustris were at the same level as studied piscivorous fish, such as perch, pike, and pikeperch, which indicates that the trophic position of the amphipod is rather high.

“Due to the high fatty acid content, G. lacustris likely is a valuable prey for many fish, and also seals have been found to eat these amphipods. We also saw that some G. lacustris individuals attacked other crustaceans in the sample jars – even though they were lifted from depths of 60-65 meters only moments ago”, says Hiltunen.

The study was conducted before the research vessel Muikku was decommissioned

The increase in air and water temperatures due to climate change threatens this cold-adapted glacial relict amphipod.

“G. lacustris as a relict from the ice age is clearly adapted to cold waters. The species is not likely to survive in warmer waters, and previous studies have found that it cannot migrate to new lakes for example via rivers”, say the researchers Jouni Salonen and Minna Hiltunen.

The study was conducted with the unique equipment of research vessel Muikku, which has been decommissioned since then.

“It would not have been possible to do this study and gain this new information on G. lacustris without R/V Muikku. The value of this research on large lakes and their ecosystems will only increase in the future”, says professor Jouni Taskinen from the University of Jyväskylä, who originally started the research while working at the University of Eastern Finland.

The study on the ecology of G. lacustris has been published on the journal Freshwater Biology in September 2019: https://onlinelibrary.wiley.com/doi/full/10.1111/fwb.13404

A dynamic genetic code based on DNA shape