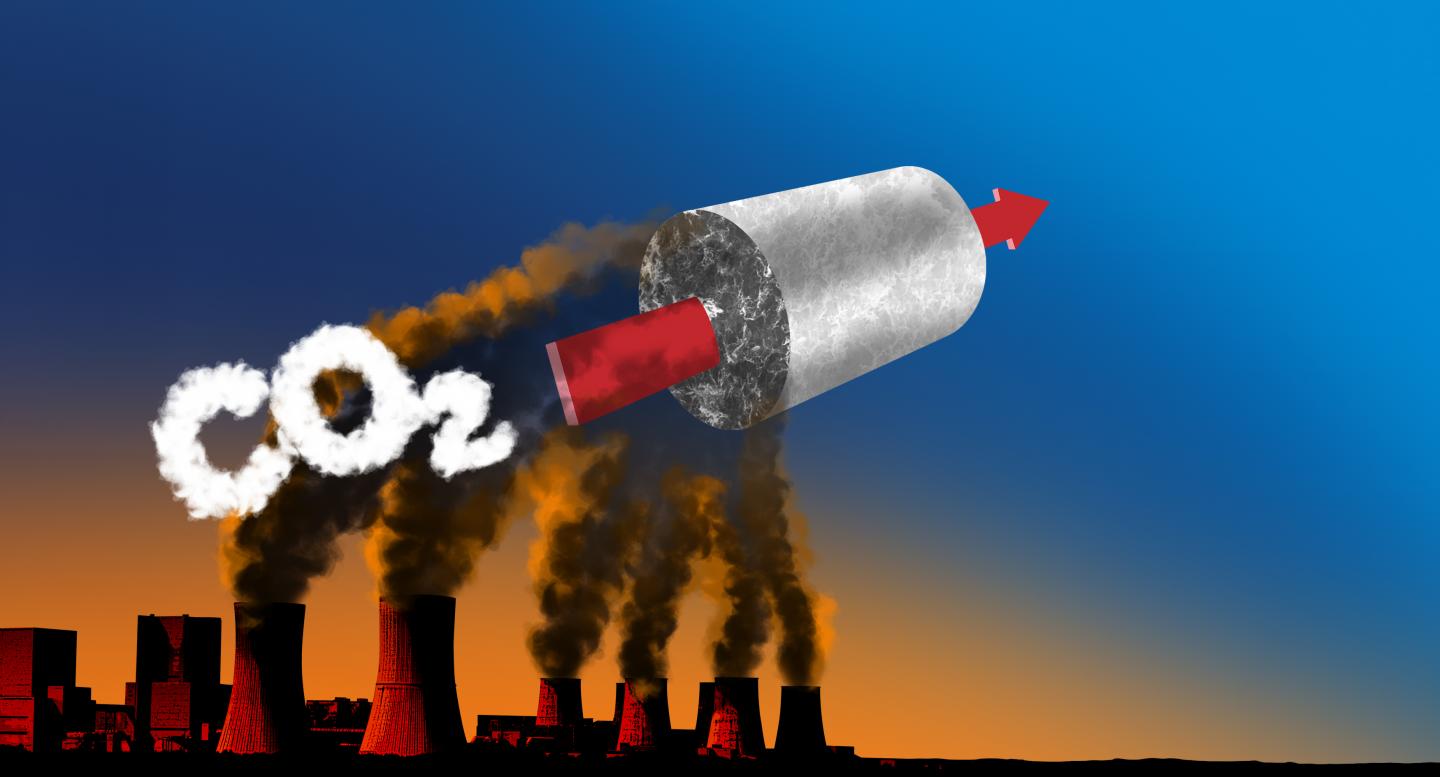 In a joint research study from Sweden, scientists from Chalmers University of Technology and Stockholm University have developed a new material for capturing carbon dioxide. The new material offers many benefits – it is sustainable, has a high capture rate, and has low operating costs. The research has been published in the journal ACS Applied Materials & Interfaces.

Carbon Capture and Storage (CCS) is a technology that attracts a lot of attention and debate. Large investments and initiatives are underway from politicians and industry alike, to capture carbon dioxide emissions and tackle climate change. So far, the materials and processes involved have been associated with significant negative side effects and high costs. But now, new research from Chalmers University of Technology and Stockholm University in Sweden has demonstrated the possibility of a sustainable, low-cost alternative with excellent, selective carbon dioxide-capturing properties.

The new material is a bio-based hybrid foam, infused with a high amount of CO2-adsorbing ‘zeolites’ – microporous aluminosilicates. This material has been shown to have very promising properties. The porous, open structure of the material gives it a great ability to adsorb the carbon dioxide.

“In the new material, we took zeolites, which have excellent capabilities for capturing carbon dioxide, and combined them with gelatine and cellulose, which has strong mechanical properties. Together, this makes a durable, lightweight, stable material with a high reusability. Our research has shown that the cellulose does not interfere with the zeolites’ ability to adsorb carbon dioxide. The cellulose and zeolites together therefore create an environmentally friendly, affordable material,” says Walter Rosas Arbelaez, PhD student at Chalmers’ Department of Chemistry and Chemical Engineering and one of the researchers behind the study.

The researchers’ work has yielded important knowledge and points the way for further development of sustainable carbon capture technology. Currently, the leading CCS technology uses ‘amines’, suspended in a solution. This method has several problems – amines are inherently environmentally unfriendly, larger and heavier volumes are required, and the solution causes corrosion in pipes and tanks. Additionally, a lot of energy is required to separate the captured carbon dioxide from the amine solution for reuse. The material now presented avoids all of these problems. In future applications, filters of various kinds could be easily manufactured.

“This research fits well with the ongoing developments within CCS and CCU (Carbon Capture and Utilisation) technology, as a sustainable alternative with great potential. In addition to bio-based materials being more environmentally friendly, the material is a solid – once the carbon dioxide has been captured, it is therefore easier and more efficient to separate it than from the liquid amine solutions,” says Professor Anders Palmqvist, research leader for the study at Chalmers.

Zeolites have been proposed for carbon capture for a long time, but so far, the obstacle has been that ordinary, larger zeolite particles are difficult to work with when they are processed and implemented in different applications. This has prevented them from being optimally used. But the way the zeolite particles have been prepared this time – as smaller particles in a suspension – means they can be readily incorporated in and supported by the highly porous cellulose foam. Overcoming this obstacle has been a vital breakthrough of the current study.

“What surprised us most was that it was possible to fill the foam with such a high proportion of zeolites. When we reached 90% by weight, we realized that we had achieved something exceptional. We see our results as a very interesting piece of the puzzle in the search for a solution to the complex challenge of being able to reduce the amount of carbon dioxide in the Earth’s atmosphere quickly enough to meet climate goals,” says Walter Rosas Arbelaez.

After capture, the carbon dioxide can then be stored (CCS) or converted in a reaction (CCU). The latter is undergoing interesting and promising parallel research at Chalmers right now to enable the conversion of carbon dioxide to methanol. The results need further evaluation and comparison with other conversion methods.

More information about the research:

The two main authors, doctoral students Walter Rosas from Chalmers University of Technology and Luis Valencia from Stockholm University, met within an EU project and started collaborating. The aim of their research has been to investigate the combination of a very porous biomaterial that can be manufactured at a low cost, with the specific function of the zeolite to adsorb/capture carbon dioxide. The research showed that microporous (

In the study, the researchers managed to overcome the difficult-to-handle properties that ordinary larger zeolite particles have, an obstacle which has until now made them difficult to implement in this type of application. The key was that the smaller particles could be combined with a meso- and macroporous support material based on a foam of gelatin and nanocellulose, which could then contain ultra-high amounts of the zeolite without losing too much of its strong mechanical network properties. Up to 90% by weight of zeolite content could be achieved, giving the material a very good ability to selectively adsorb carbon dioxide in combination with a very open pore structure, enabling high gas flows. The zeolite used was of the type silicalite-1 and can be seen as a model that can be replaced by other zeolites if needed.