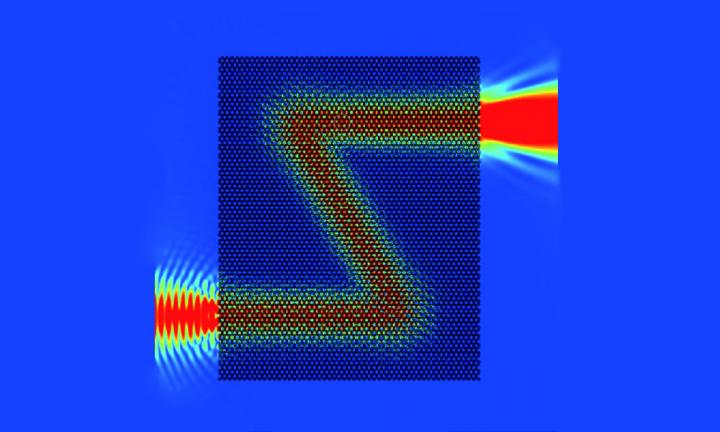 In these kinds structures, sound signals remain robust and insensitive to noise caused by impurities and defects in the material. In the framework of this research, the scientists have discovered that the acoustic topological insulator could act as an extremely robust waveguide, capable of radiating sound in a very narrow ray towards the far field. This focused acoustic ray could be extremely important for applications such as non-destructive testing by ultrasound or in diagnostic ultrasound scans in medicine and biology, as pointed out by the researchers.

In the article, recently published in the journal Communications Physics along with physicists from the University of Nanjing (China) and the Stanford University (US), the scientists have reviewed the most recent studies on the development of this topic related to quantum physics. This area of research is at the forefront of physics and won the Nobel Prize in Physics 2016. The scientists who carried out this study wanted to see if the phenomenon of topological insulators, traditionally used in quantum physics to control electrical signals, could have an equivalent effect using sound waves.

“The idea was to use a concept so exotic it could produce completely new possibilities for acoustic transducers, sensors and waveguides. Moreover, from a more physical perspective, it would mean that certain effects in quantum physics have an equivalent in classic sound wave physics”, comments one of the authors of the study, Johan Christensen, from the Physics Department at the UC3M.

For this, the researchers wanted to emulate the so-called “valley-Hall effect”, used to investigate electrical conduction in different conductive and semi-conductive materials. This effect means that the magnetic field tends to separate the positive charges from the negative charges in opposite directions, so the “valleys” are maximums and minimums of electron energy in a crystal solid. The balance is restored when the force applied by the electric field generated by the distribution of charges opposes the force applied by the magnetic field. With the aim of emulating an acoustic version of this valley-Hall effect, the researchers created an artificial macroscopic crystal inspired by the weaving of Japanese baskets known as “kagome”, substituting the bamboo for small cylinders of epoxy resin. The functioning of this crystal was explained last year in several articles published by Johan Christensen in the scientific journals Advanced materials and Physical review letters.

“Curiously, the acoustic topological states related to the valley-Hall effect show a circulating vortex which, to our surprise, has produced unexpected and unprecedented properties for acoustics”, explains Johan Christensen. “Our Kagome crystal showed incredible resistance against pronounced defects, curves and turns when guiding the sound over the surface or interface of the crystal”.

This line of research is being developed as part of a wider scientific project, an ERC Starting Grant Horizon 2020 funded by the European Union (GA 714577) named “Frontiers in Phononics: Parity-Time Symmetric Phononic Metamaterials” (PHONOMETA). In this context, its aim is to analyse and design a new generation of piezoelectric semiconductors which allow the functioning of complex acoustic systems to be optimised.