A scientific first: A robot able to “smell” using a biological sensor 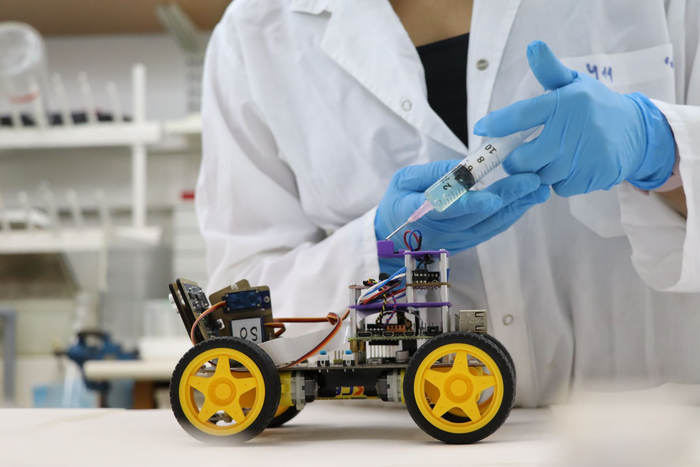 The researchers say that the biological sensor sensitivity to smell is 10,000 times higher than that of existing electronic devices.

A new technological development by Tel Aviv University has made it possible for a robot to smell using a biological sensor. The sensor sends electrical signals as a response to the presence of a nearby odor, which the robot can detect and interpret.

In this new study, the researchers successfully connected the biological sensor to an electronic system and using a machine learning algorithm, were able to identify odors with a level of sensitivity 10,000 times higher than that of a commonly used electronic device. The researchers believe that in light of the success of their research, this technology may also be used in the future to identify explosives, drugs, diseases, and more.

Dr. Maoz and Prof. Ayali explain: “Man-made technologies still can’t compete with millions of years of evolution. One area in which we particularly lag behind the animal world is that of smell perception. An example of this can be found at the airport where we go through a magnetometer that costs millions of dollars and can detect if we are carrying any metal devices. But when they want to check if a passenger is smuggling drugs, they bring in a dog to sniff him. In the animal world, insects excel at receiving and processing sensory signals. A mosquito, for example, can detect a 0.01 percent

difference in the level of carbon dioxide in the air. Today, we are far from producing sensors whose capabilities come close to those of insects.”

The researchers point out that, in general, our sensory organs, such as the eye, ear and nose – as well as those of all other animals – use receptors that identify and distinguish between different signals. Then, the sensory organ translates these findings into electrical signals, which the brain decodes as

information. The challenge of biosensors is in the connection of a sensory organ, like the nose, to an electronic system that knows how to decode the electrical signals received from the receptors.

Prof. Yovel: “We connected the biological sensor and let it smell different odors while we measured the electrical activity that each odor induced. The system allowed us to detect each odor at the level of the insect’s primary sensory organ. Then, in the second step, we used machine learning to create a ‘library’ of smells. In the study, we were able to characterize 8 odors, such as geranium, lemon and marzipan, in a way that allowed us to know when the smell of lemon or marzipan was presented. In fact, after the experiment was over, we continued to identify additional different and unusual smells, such as various types of Scotch whiskey. A comparison with standard measuring devices showed that the sensitivity of the insect’s nose in our system is about 10,000 times higher than the devices that are in use today.”

Dr. Maoz concludes: “Nature is much more advanced than we are, so we should use it. The principle we have demonstrated can be used and applied to other senses, such as sight and touch. For example, some animals have amazing abilities to detect explosives or drugs; the creation of a robot with a biological nose could help us preserve human life and identify criminals in a way that is not possible today. Some animals know how to detect diseases. Others can sense earthquakes. The sky is the limit.”

In future work, the researchers plan to give the robot a navigation ability to allow it to localize the odor source and later, its identity.