A quantum wave in two crystals

Particles can move as waves along different paths at the same time – this is one of the most important findings of quantum physics. A particularly impressive example is the neutron interferometer: neutrons are fired at a crystal, the neutron wave is split into two portions, which are then superimposed on each other again. Characteristic interference pattern can be observed which prove the wave properties of matter. 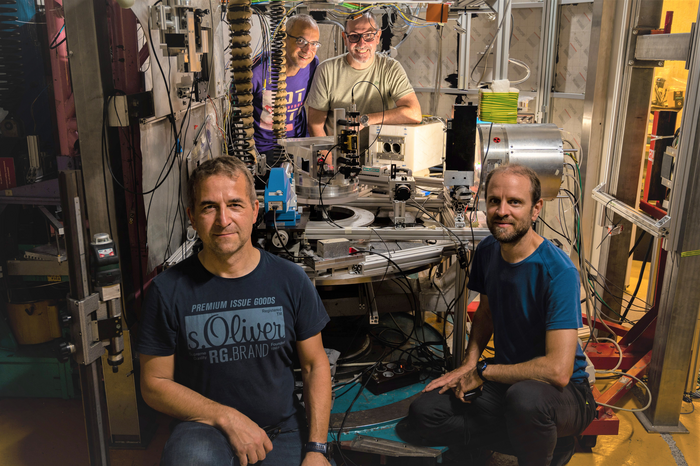 Particles can move as waves along different paths at the same time – this is one of the most important findings of quantum physics. A particularly impressive example is the neutron interferometer: neutrons are fired at a crystal, the neutron wave is split into two portions, which are then superimposed on each other again. Characteristic interference pattern can be observed which prove the wave properties of matter.

Such neutron interferometers have played an important role for precision measurements and fundamental physics research for decades. However, their size has been limited so far because they worked only if carved from a single piece of crystal. Since the 1990s, attempts have also been made to produce interferometers from two separate crystals – but without success. Now a team from TU Wien, INRIM Turin and ILL Grenoble has achieved precisely this feat, using a high-precision tip-tilt platform for the crystal alignment. This opens up completely new possibilities for quantum measurements, including research on quantum effects in a gravitational field.

The history of neutron interferometry began in 1974 in Vienna. Helmut Rauch, for many years professor at the Atomic Institute of TU Wien, created the first neutron interferometer from a silicon crystal and was able to observe the first interference of neutrons at the Vienna TRIGA reactor. A few years later, the TU Wien set up a permanent interferometry station, the S18, at the world’s most powerful neutron source, the Institut Laue-Langevin (ILL) in Grenoble. This setup is operational up to the present day.

“The principle of the interferometer is similar to the famous double-slit experiment, in which a particle is shot at a double slit in a wave-like manner, passes through both slits simultaneously as a wave and then superimposes on itself, so that afterwards a characteristic wave pattern is created at the detector,” says Hartmut Lemmel (TU Wien).

But while in the double-slit experiment the two slits are only a minimal distance apart, in the neutron interferometer the particles are split into two different paths with several centimetres in between. The particle wave reaches a macroscopic size – nevertheless, by superimposing the two paths, a wave pattern is created that clearly proves: The particle did not choose one of the two paths, it used both paths simultaneously.

Any inaccuracy can destroy the result

The quantum superpositions in a neutron interferometer are extremely fragile. “Tiny inaccuracies, vibrations, displacements or rotations of the crystal destroy the effect” says Hartmut Lemmel.  “That is why you usually mill the entire interferometer out of a single crystal.” In a crystal, all atoms are connected to each other and have a fixed spatial relationship to each other – so you can minimize the influence of external disturbances on the neutron wave.

But this monolithic design limits the possibilities, because crystals cannot be made in any size. “Back in the 1990s, people therefore tried to create neutron interferometers out of two crystals that could then be positioned at a greater distance from each other” says Lemmel, “but it was not successful. The alignment of the two crystals against each other did not reach the required accuracy.”

The demands on accuracy are extreme. When a crystal of the interferometer is displaced by a single atom the interference pattern shifts by a full period. If one of the crystals is rotated by an angle in the order of one hundred millionth of a degree, the interference pattern is destroyed. The required angular precision corresponds roughly to shooting a particle from Vienna to Grenoble and aiming at a pinhead, 900 kilometers apart – or aiming at a drain cover on the Moon.

The Istituto Nazionale di Ricerca Metrologica (INRIM) in Turin provided the necessary technologies, which it had developed over decades in the field of combined optical and X-ray interferometry. Scanning X-ray interferometers also consist of separate silicon crystals and are similarly sensitive. The sensitivity to the spatial displacement of a crystal was used in Turin to determine the lattice constant of silicon with unprecedented accuracy. This result allowed to count the atoms of a macroscopic silicon sphere, to determine the Avogadro and Planck constants and to redefine the kilogram.

“This is an important breakthrough for neutron interferometry” says Michael Jentschel from the ILL. “Because if you can control two crystals well enough that interferometry is possible, you can also increase the distance and expand the size of the overall system quite easily.”

For many experiments, this total size determines the accuracy that can be achieved in the measurement. It will become possible to investigate fundamental interactions with unprecedented accuracy – for example, the sensitivity of neutrons to gravity in the quantum regime and to hypothetical new forces.