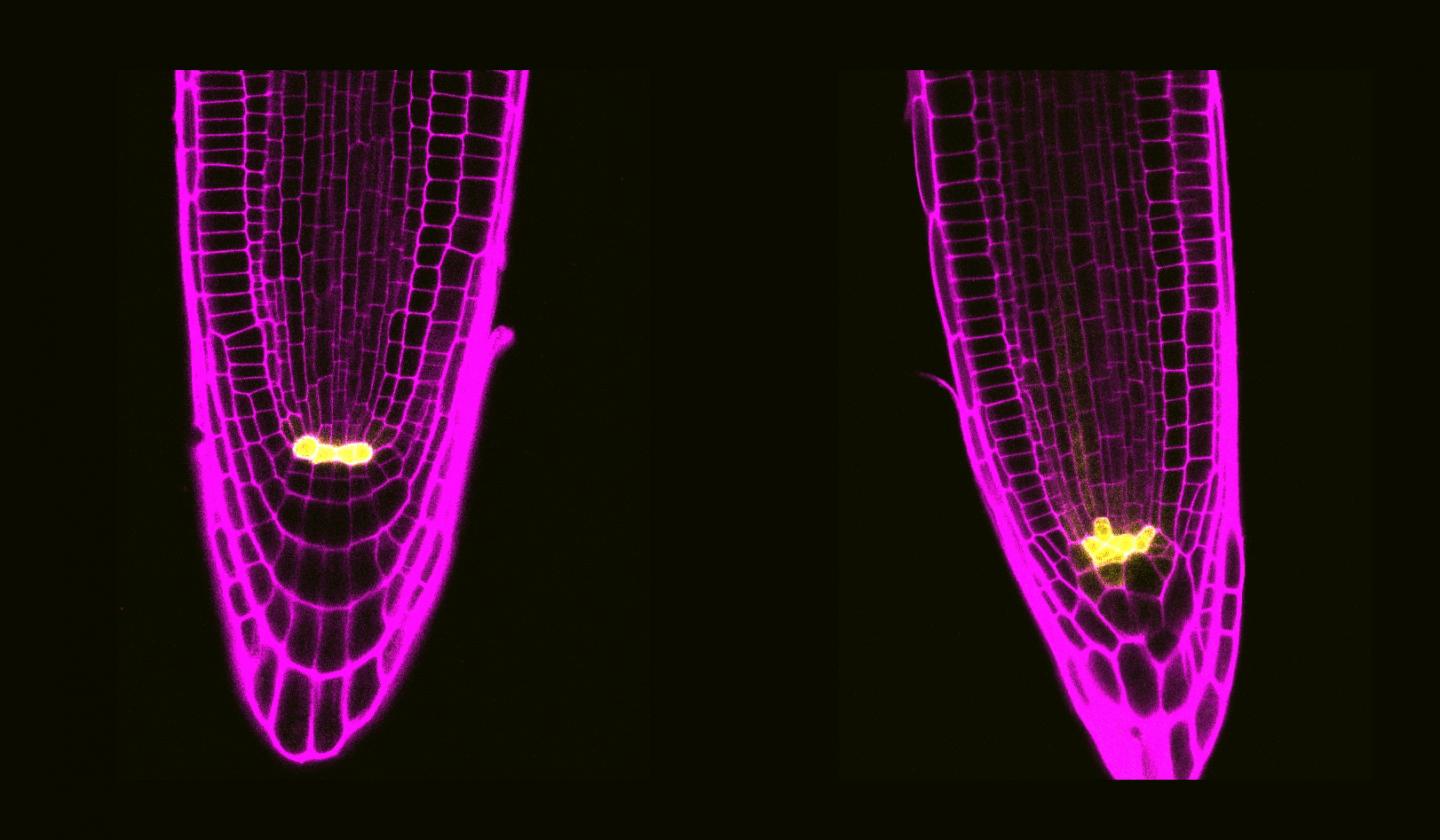 A multidisciplinary research team, led by the CSIC biologist at CRAG, Ana I. Caño Delgado, and the physicist from the University of Barcelona, Marta Ibañes, has discovered that two plant stem cell proteins, known for their role in the correct development of the root, physically interact and regulate each other to avoid cellular division. The study, result of fifteen years of continued research carried out by the two researchers, reveals that these two proteins, known as BRAVO and WOX5, act in a specific manner in a small group of stem cells, and that their interaction is key to the plant’s survival under genomic and environmental stress factors like extreme cold, heat, or floods. The results, obtained with the model plant Arabidopsis thaliana, have recently been published in the high impact journal Molecular Systems Biology.

In the same way that the proteins BRAVO and WOX5 need each other to function properly, this discovery could not have been possible without uniting the knowledge and the academic disciplines provided by both research teams: the biochemistry, genetics and cellular biology, on one hand, and the mathematical modelling, on the other.

“Previous work from my team and others had demonstrated that the loss of either one of the proteins, BRAVO or WOX5, produced the root stem cells division. However, their molecular connection was not yet understood,” explains Ana I. Caño Delgado.

“In general, genetic regulations involve a complexity that is often not intuitive and that can only be understood through mathematical models and computer simulations. The mathematical models we have created have made it possible to make sense of the amount of data gathered by the CRAG team”, adds Marta Ibañes, researcher at the UB Institute of Complex Systems.

These new mathematical models will allow now the in silico experimentation, creating hypothetical situations that may happen at the root’s stem cells, such as the effect of applying hormones or the possible responses during stress situations.

The quiescent centre: a reservoir of stem cells

Plants have a set of stem cells in the tip of the primary root that gives them the ability to grow indefinitely. The majority of these cells divide at a fast pace, creating other stem cells and the different cells that form the root’s tissues, like the epidermis or the vascular tissue. However, at one end of this niche there are a few stem cells that divide at a slower pace; this is why, the area they occupy is called “quiescent centre”.

Every time a cell duplicates its genetic material to divide itself is at risk of incorporating replication errors, mutations that can have negative consequences for the organism. This is why the stem cells of the quiescent centre represent an insurance, a reservoir of genetically safe cells. If necessary, these cells can “wake up” and divide to fill the stem cell niche.

It is exactly in these few cells of the quiescent centre where BRAVO and WOX5 proteins exercise their important function: suppressing cell division.

“We created arabidopsis plants with simultaneous mutations in BRAVO and WOX5 genes and we observed that they had less capacity to regenerate the roots, which were shorter and less abundant”, explains Isabel Betegón-Putze, first author of the article, who carried out these experiments during her PhD.

Upon severe or prolonged stress, two specific responses take place at the stem cell niche: the death of the fast-dividing stem cells and the activation of the quiescent centre cells. The quiescent centre cells activate, for example, after a cut at the root apex, or after root freezing or lead poisoning. In doing so, they replace the dead stem cells allowing the root to keep growing and developing correctly, which in turn guarantees the nutrition and support for the plant.

Understanding the molecular mechanisms that regulate these processes is key to obtaining more resilient crops, especially in the current situation, with climates getting more extreme.

An extraordinary source of youth

Plants, unlike animals, can form new organs (leaves, flowers, etc.) at adult age and, furthermore, they keep growing during their whole life (which can last more than 2000 years!). Stem cells in animals and plants seem to use similar strategies to resolve similar biological problems; however, the molecular processes that regulate them seem to be different. Understanding these differences can be very helpful to design useful strategies in medicine and cosmetics that slow down cellular aging and promote the regeneration of damaged tissue. This study and others led by Ana I. Caño-Delgado are one step forward in this direction.