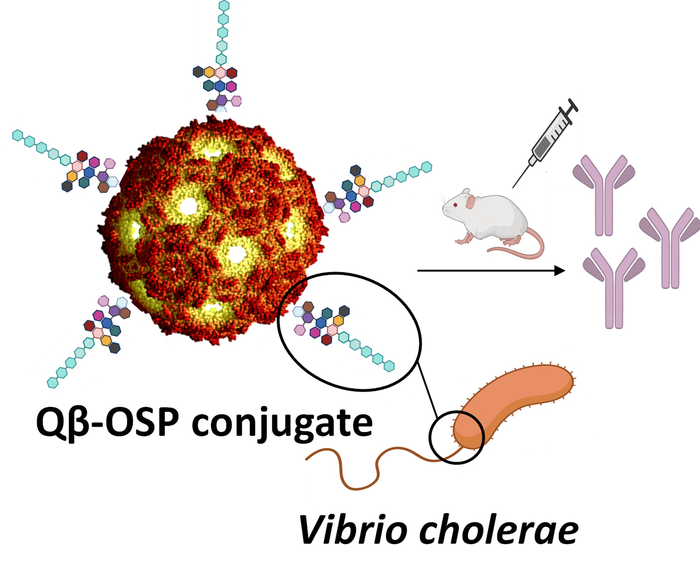 Current cholera vaccines contain killed or weakened V. cholerae bacteria and are administered orally. They offer the lowest level and duration of protection in young children, who are commonly affected by cholera in endemic countries. The immune system produces antibodies against the O-specific polysaccharide (OSP) on the surface of V. cholerae, but this polysaccharide in isolation does not generate a strong, long-lasting immune response. Peng Xu, Edward Ryan, Xuefei Huang and colleagues wondered if attaching OSP to virus-like particles could induce stronger, longer-lasting immunity.

So the researchers developed a method to efficiently link multiple copies of OSP to Qβ, a virus-like particle that infects bacteria. The modified virus-like particles were recognized by antibodies in blood taken from recovering cholera patients, but not from patients with typhoid, another bacterial disease. Next, the team immunized mice with Qβ-OSP, observing that three doses caused a strong antibody response that persisted at least 265 days after the first dose. The immunized mice had antibodies that recognized the OSP from the natural lipopolysaccharide of V. cholerae. When the researchers mixed serum antibodies from the mice with other immune system proteins that kill bacteria and with live V. cholerae, antibodies from two of the five mice triggered more bacterial death than those from mice immunized with Qβ alone. The virus-like particle could mimic natural bacteria by presenting multiple copies of OSP on its surface, the researchers say, and it warrants further evaluation as a next-generation cholera vaccine.

The authors acknowledge funding from the National Institutes of Health, the Fogarty International Center and Michigan State University. Xuefei Huang is the founder of Iaso Therapeutics Inc.

For more of the latest research news, register for our upcoming meeting, ACS Spring 2022. Journalists and public information officers are encouraged to apply for complimentary press registration by emailing us at [email protected]

The American Chemical Society (ACS) is a nonprofit organization chartered by the U.S. Congress. ACS’ mission is to advance the broader chemistry enterprise and its practitioners for the benefit of Earth and all its people. The Society is a global leader in promoting excellence in science education and providing access to chemistry-related information and research through its multiple research solutions, peer-reviewed journals, scientific conferences, eBooks and weekly news periodical Chemical & Engineering News. ACS journals are among the most cited, most trusted and most read within the scientific literature; however, ACS itself does not conduct chemical research. As a leader in scientific information solutions, its CAS division partners with global innovators to accelerate breakthroughs by curating, connecting and analyzing the world’s scientific knowledge. ACS’ main offices are in Washington, D.C., and Columbus, Ohio.