A “perfect storm” of genetic mutations is behind rare sporadic brain malformations that cause stroke, seizures

A rare type of brain blood vessel malformation known as a cavernous angioma affects more than one million Americans and carries a lifetime risk of stroke and seizures. Only around one-third of cases can be connected to inherited familial genetic mutations. The majority of cavernous angiomas are sporadic and — until now — their cause was unknown. 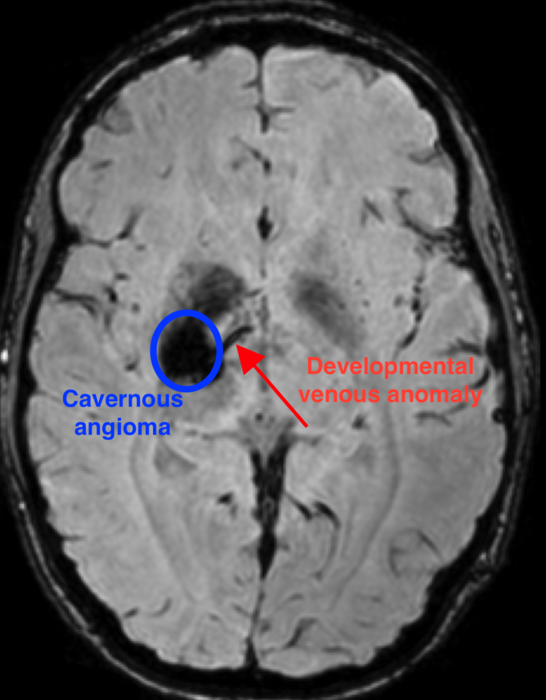 A rare type of brain blood vessel malformation known as a cavernous angioma affects more than one million Americans and carries a lifetime risk of stroke and seizures. Only around one-third of cases can be connected to inherited familial genetic mutations. The majority of cavernous angiomas are sporadic and — until now — their cause was unknown.

A new study by researchers at the University of Chicago Medicine, Duke University and the University of Pennsylvania has identified a set of sporadic genetic mutations that make it more likely a person will develop these lesions, along with additional mutations in the same area that fuel the lesion’s growth. Understanding the underlying causes of these brain malformations will be the key to identifying which patients are at risk for their development and finding effective treatments against the condition. The research was published March 14 in Nature Cardiovascular Research.

“We’ve known for more than two decades that there is a familial form of cavernous angiomas that is inherited via genes passed on from generation to generation,” said Issam Awad, MD, the John Harper Seeley Professor of Neurological Surgery and Director of Neurovascular Surgery at UChicago Medicine. “But in the majority of people with this type of brain bleeding, the lesion is not inherited. And until now, we’ve never known why some people randomly end up with this lesion.”

The new research has identified a unique combination of mutations that occurs during the development of the brain that results in a cavernous angioma. First, a mutation in the gene PIK3CA leads to an abnormal pattern of vessels in the brain, known as a developmental venous anomaly, or DVA. The DVA alone is generally innocuous. But when a second mutation in one of several genes, such as MAP3K3, KRIT1, CCM2, or PDCD10, occurs in the area of the abnormal vein, a cavernous angioma develops.

“We’d previously observed that often these lesions grow near a preexisting abnormal vein,” said Awad. “But these DVAs are actually very common – about 6% to 10% of people have one, and the vast majority of them never have any problems. Rarely, those veins grow a cavernous angioma and we’ve never known why. In this study, we were finally able to use mutation analysis on the vein itself, to see why the vein seems predisposed to these angiomas.”

The researchers were able to examine the genetics of both the angioma and its connected DVA, thanks to the delicate surgical method used to repair bleeding lesions. It requires removing small portions of the veins to detangle them from the cavernous angioma lesion. This led to the discovery of the mutation in PIK3CA in the vein, and the realization that the same mutation co-occurs with a second mutation within the angioma.

“This is very novel, because we can now explain why the DVA forms in the first place,” said Awad. “Along with a second mutation, it is the genetic seed for the formation and growth of the cavernous angioma.”

Not only does this provide a genetic mechanism for the formation of the DVA, but the Chicago team also discovered molecules circulating in the blood that are associated with the key brain mutation. This is the first time that a blood test for a focal somatic mutation in the brain has been described.

“Now we can develop blood tests that can identify these mutations in the brain, and in the future, we can develop therapies that can inhibit the mechanisms that cause these lesions to form,” Awad said. “Some of the genes we’ve identified can be inhibited by drugs that are already on the market.”

The researchers hope to translate these findings into additional research and, ultimately, more treatments to prevent and heal cavernous angiomas. The next steps include searching for biomarkers that might help distinguish benign DVAs from the ones that are destined to grow a cavernous angioma.

“Ideally, we’ll be able to tell with a simple blood test if you have a benign vein abnormality, or if it has the seed that will lead it to grow an angioma,” said Awad. “In addition, we’ll be testing some of these pharmacologic inhibitors of the mutations we’ve identified to see if they will stabilize or even shrink the brain lesions.

“A mechanism is not just about scientific curiosity,” he continued. “It should motivate us to change patient care. If we don’t know the mechanism, we can’t have a truly rational therapy.”

The study, “Developmental venous anomalies are a genetic primer for cerebral cavernous malformations,” was supported by the National Institutes of Health (P01NS092521 and F31HL152738). Additional authors include Romuald Girard, Rhonda Lightle, Abhinav Srinath, Sharbel Romanos, Ying Li and Chang Chen of the University of Chicago; Daniel A. Snellings and Douglas A. Marchuk of Duke University; and Aileen A. Ren and Mark L. Kahn of the University of Pennsylvania.

The University of Chicago Medicine, with a history dating back to 1927, is one of the nation’s leading academic health systems. It unites the missions of the University of Chicago Medical Center, Pritzker School of Medicine and the Biological Sciences Division. Twelve Nobel Prize winners in physiology or medicine have been affiliated with the University of Chicago Medicine. Its main Hyde Park campus is home to the Center for Care and Discovery, Bernard Mitchell Hospital, Comer Children’s Hospital and the Duchossois Center for Advanced Medicine. It also has ambulatory facilities in Orland Park, South Loop, Homewood and River East as well as affiliations and partnerships that create a regional network of care. UChicago Medicine offers a full range of specialty-care services for adults and children through more than 40 institutes and centers including an NCI-designated Comprehensive Cancer Center. Together with Harvey-based Ingalls Memorial, UChicago Medicine has 1,296 licensed beds, nearly 1,300 attending physicians, over 2,800 nurses and about 970 residents and fellows.