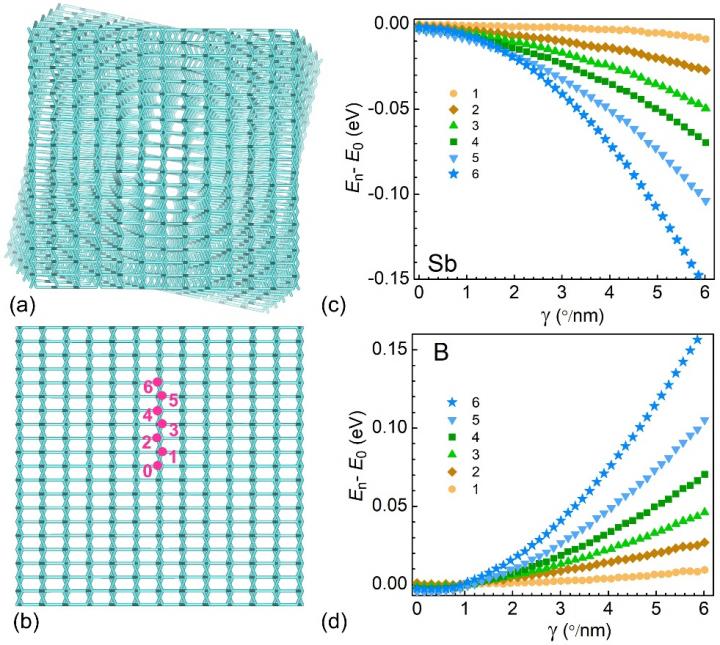 Can we make p-n junctions with single crystalline nanowires? Frankly, the answer will be “No” if one thinks the problem intuitively. Indeed, similar to the bulk, p-type dopants and n-type dopants in a codoped single crystalline nanowire also feel strong Coulomb attraction. Without an interface, how can we overcome such attraction? It requires an effective modulation/control of the spatial occupation sites, i.e., spatial distribution, of dopants. In fact, this is one of the long-standing and fundamental issues regarding doping in semiconductor. From the point of view of materials engineering, this can be attributed to the failure of conventional approaches such as hydrostatic, biaxial and uniaxial stresses on the modulation of the spatial distribution of dopants. However, since all these mentioned distortions are uniform, can we employ some inhomogeneous ones, such as twisting? In fact, twisting of structures represents a focus of recent condensed matter physics research in low dimensions.

In a new paper published in National Science Review, a team of scientists from Beijing Normal University, the Chinse University of Hong Kong, and Beijing Computational Science Research Center present their theoretical advances of codoped Si nanowire under twisting. They employ both microscopic simulations based on the generalized Bloch theorem and analytical modeling based on the bond orbital theory to conduct the study and deliver the physics behind.

Interestingly, twisting has substantial impact on distribution of dopants in nanowires. From the displayed figure, in a twisted Si nanowire, a dopant of larger atomic size (Such as Sb) has a lower formation energy if it occupies an atomic site closer to nanowire surface; On the opposite, a dopant of smaller atomic size (Such as B) has a lower formation energy if it occupies an atomicsites around the nanowire core. According to their calculations, it is possible to separate n-type and p-type dopants in the codoped nanowire with proper choices of codoping pairs, e.g., B and Sb. A bond orbital analysis reveals that it is the twist-induced inhomogeneous shear strain along nanowire radial dimension that drives the effective modulation. These findings are fully supported by density-functional tight-binding based generalized Bloch theorem simulations.

Pollutants, pathogens could team up to make us sick