A new scientific instrument for the nation 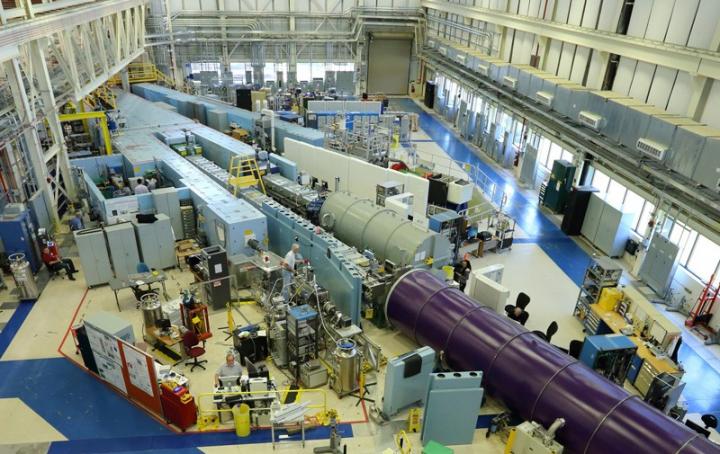 Credit: Photo courtesy of National Institute of Standards and Technology

The University of Delaware has been tapped to lead the development of a world-class neutron spin echo spectrometer for the United States. This scientific instrument will advance U.S. research on countless materials important to humanity, from new medicines to more powerful batteries.

UD’s Norman Wagner, the Unidel Robert L. Pigford Chair in Chemical and Biomolecular Engineering and director of the Center for Neutron Science, will lead the project, which is funded by an $11.8 million grant from the National Science Foundation.

“This groundbreaking research project brings distinction to the entire University of Delaware, and we are excited to see what the future will bring,” said UD President Dennis Assanis. “On behalf of our entire University, I want to offer heartfelt congratulations to Dr. Wagner and his research group on this remarkable accomplishment.”

It is among the first awards in NSF’s Mid-Scale Research Infrastructure program, announced Sept. 17.

“These awards represent the first in NSF’s agency-wide effort to support the mid-range infrastructure that will be invaluable to strengthening the U.S. scientific research enterprise,” said Jim Ulvestad, National Science Foundation chief officer for research facilities. “The funded projects include an impressive collection of new design efforts and advanced instrumentation. These projects fill gaps and provide unique research capabilities for the U.S that will engage many early-career scientists and engineers in the pursuit of ground-breaking discoveries.”

Wagner will work together with colleagues at the National Institute of Standards and Technology (NIST) in Gaithersburg, Maryland, and at the University of Maryland to elevate the nation’s best neutron spin echo spectrometer, housed at NIST, to world-class status, boosting research in engineering, soft matter such as gels and polymers, and the biological sciences.

“This award represents an important opportunity to greatly advance research that will benefit the University of Delaware, the United States and the world,” said Charles G. Riordan, vice president for research, scholarship and innovation. “Dr. Wagner and his colleagues have demonstrated excellent leadership in spearheading this national effort.”

Detecting the motions of molecules

But what exactly is a neutron spin echo spectrometer, you ask? For materials scientists, it’s a game changer, Wagner said.

Neutrons are particles without an electrical charge, found in the nucleus of an atom. Neutrons have spin like a top, so if you put them in a magnetic field, they will wobble. But when they come out of that wobble, all of those neutrons will be pointing in the same direction — unless they encounter molecular motion in their path. By placing a sample of interest in the neutrons’ path, scientists can detect and measure its dynamics based on the neutrons’ spin. If the spin echo comes back perfectly, there’s no motion in the sample. But if the echo is different, then the sample imparted some motion.

“In some respects, it’s like pinging a sample with sonar to see what’s moving and where, except this instrument is uniquely looking at molecular motion,” Wagner said.

The upgraded instrument, which will become part of the Center for High Resolution Neutron Scattering, a national research facility at NIST, will allow scientists to see how molecules are moving through things, whether it’s the proteins in a biopharmaceutical drug or the molecules that trap salt rather than let the water flow through a water purification membrane. These motions, viewed over a few hundred nanoseconds, may sound minuscule, but they can affect the properties of a material in critical ways, Wagner said.

Formerly, scientists believed the structure of a material gave it its function — that was more of a three-dimensional way of looking at the world. But 21st-century thinking is in 4D – where time provides the fourth dimension, as structure is dynamic. Wagner’s French colleagues refer to it as “4D structuration,” and Wagner, who collaborates with neutron researchers around the world, is eager to move the concept forward.

One piece of advice that Wagner shares with his first-year graduate students is to work on big, “grand challenge” problems. Clearly, he practices what he preaches.

“During the next five years, UD, NIST and Maryland will be working together to engineer this new tool for scientific discovery,” he said.

“And our UD students will be part of it, preparing the scientific community for this awesome new instrument that will be equal to, or better than, the best in the world.”

More information about the new grant and the neutron spin echo instrument will be presented at Neutron Day 2019, set for Wednesday, Oct. 30, at Clayton Hall Conference Center. Registration for the free event is now open at this webpage.