UToledo researchers have developed a mouse that mimics the human development and progression of type I diabetes, a breakthrough that will open the door to new research 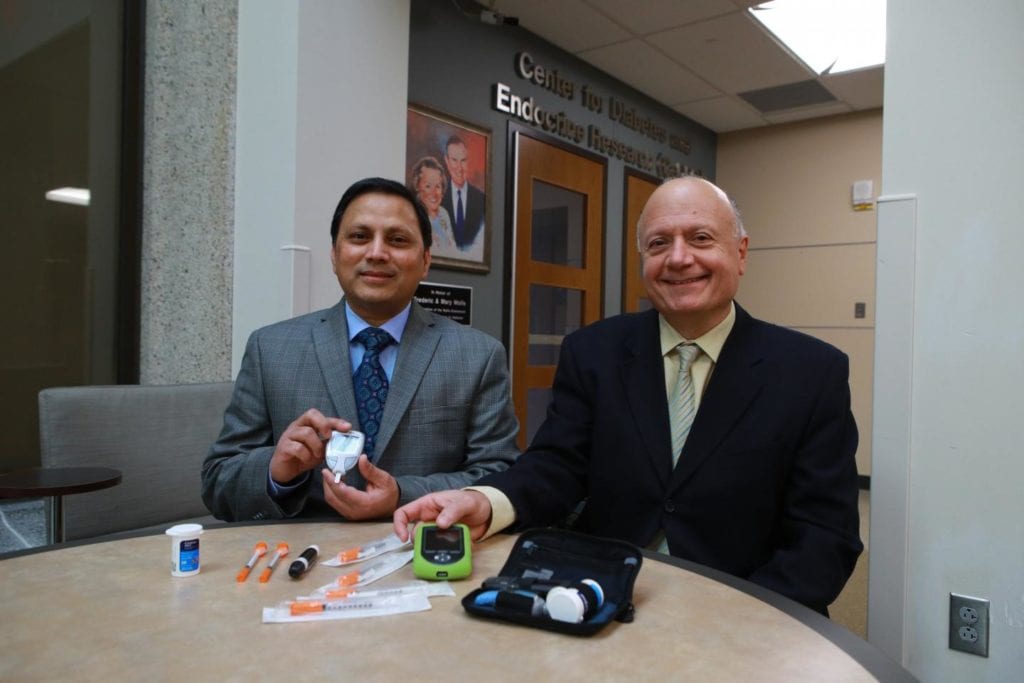 Credit: The University of Toledo

Researchers at The University of Toledo have found a new way to replicate in lab mice the development and progression of Type I diabetes, a breakthrough that has the potential to reshape how the chronic disease is studied.

An estimated 1.25 million Americans are living with Type I diabetes. While the condition can be managed with insulin, finding a treatment or cure for the disease has been elusive — in part because scientists have not had a reliable animal model that mimics the full scope of human Type I diabetes.

“We see these patients every day. We see them come to the hospital, we see how they struggle,” said Dr. Juan Jaume, professor of medicine in UT’s College of Medicine and Life Sciences and senior author of the new invention. “Unfortunately, research has been held back because the scientific community didn’t have a good model to study the disease and its progression. Now we do. We have developed a mouse model that is a step forward toward finding a cure.”

In that study, Jaume, who is also chief of the Division of Endocrinology and director of UT’s Center for Diabetes and Endocrine Research, and co-collaborator Dr. Shahnawaz Imam, a senior researcher in the Departments of Medicine and an associate member of the Center for Diabetes and Endocrine Research, looked at how a certain protein can influence T-cells in the pancreas to delay the onset of diabetes.

While the study adds to the overall knowledge about diabetes, it is the mouse model that holds the real potential.

In the new model, mice spontaneously develop Type I diabetes and, importantly, the full range of complications experienced by diabetes patients. That allows study of the disease and its natural progression in a way not previously possible.

“Our model is showing exactly the same physiopathology that humans with diabetes suffer,” Imam said. “Our mice are getting eye problems, they are getting kidney problems and also neuropathy. That’s a very important part of this — they have the same human complications that all diabetes patients have, not just those with Type I.”

The laboratory mice were developed through a series of selective breeding experiments and genetic modification that included adding human genes to the mice.

A provisional patent on the Spontaneous Type I Diabetes Mouse Model was filed last year.

Type I diabetes, formerly known as juvenile diabetes, results from an autoimmune attack on cells in the pancreas that produce insulin. Without insulin, the body cannot process the sugars in food, leading to dangerously high blood sugar.

Though many species develop diabetes, Jaume said the process of Type I diabetes seems to be unique to humans. And while scientists have frequently used other specially bred mice, including what’s known as the non-obese diabetic mouse, to study diabetes and test treatments, those lab animals don’t mimic the exact human pathophysiology of the disease.

“The existing non-obese diabetic mouse model does not completely resemble the human condition,” Jaume said. “There are more than 125 different therapies that cure Type I diabetes in non-obese diabetic mice. Clinical trials were developed because of that model, but none have worked in humans. Everybody has been searching for a better model.”

Jaume and Imam have been working on their model for more than a decade. It is already showing research promise.

Using the same idea behind CAR T-cell therapy for cancer, in which certain immune system cells are taken from a patient and paired with an artificial receptor that once reintroduced into the body homes in on the tumor, the team is developing cellular therapies for diabetes that uses the mice’s regulatory cells to cool down the immune response.

The University has also filed a provisional patent on the treatment method, and Jaume and Imam will soon begin a more in-depth study of its effectiveness.

Questions in quantum computing: How to move electrons with light