Unlike traditional antibody-based fluorescent staining methods, the new dye directly binds to the cell membranes of the target cells 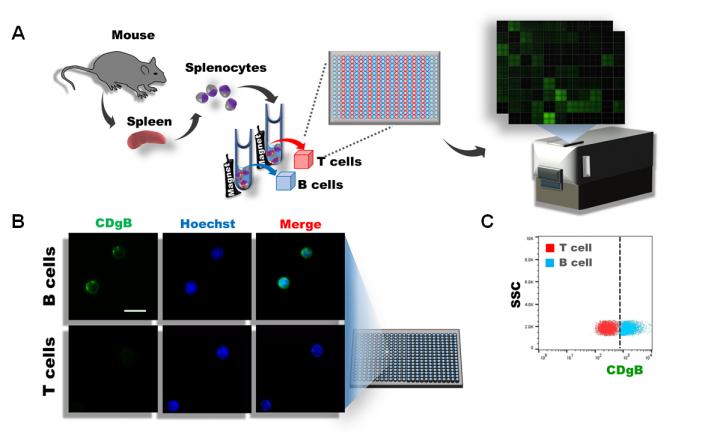 Human blood contains several different components, including plasma, red blood cells (RBCs), white blood cells (WBCs), and platelets. Among these, WBCs are divided into numerous subcategories each with unique functions and characteristics, such as lymphocytes, monocytes, neutrophils, and others. Lymphocytes are further subdivided into T lymphocytes, B lymphocytes, and NK cells. Distinguishing and separating different types of these cells is highly important in carrying out studies in the field of immunology.

Discriminating different immune cell types is typically done by flow cytometry and fluorescence-activated cell sorting (FACS), which can identify distinct populations of cells according to their size, granularity, and fluorescence. While size and granularity alone cannot distinguish cells with similar physical parameters, different types of immune cells display a distinct combination of immune receptors on the cell surfaces. For example, the T lymphocytes and B lymphocytes express CD3 and CD19, respectively. Therefore, fluorescently identifying immune cells have relied on staining the cells using multiple antibodies against different receptors. It has been long thought that it was impossible to distinguish different immune cell types without using these antibodies.

However, novel breakthrough research performed by the scientists at the Center for Self-assembly and Complexity within the Institute for Basic Science, South Korea, may have just changed this. The researchers employed a diversity oriented fluorescence library approach (DOFLA) to screen over 10,000 different fluorescent molecules using the B and T lymphocytes separated from mouse spleens. From this, they managed to discover a new fluorescent probe that can discriminate B lymphocytes over T lymphocytes without the cell receptor targeting antibodies.

The researchers called the new probe CDgB, which stands for Compound of Designation green for B lymphocytes. CDgB is a lipophilic molecule that contains a fluorescent component attached to a hydrocarbon chain. As CDgB contains both a polar fluorescent group and a hydrocarbon tail, it means that the free unbound CDgB dye molecules form aggregates similar to micelles in the solution and exhibit a low level of background fluorescence. When they attach to the cell surfaces, however, the aggregates dissociate and cause a spike in fluorescence signals. In addition, the lipophilic nature of the dye means that the dye does not bind to a protein target, and instead localizes to the lipid membrane structure directly. According to the researchers, this was “the first example to report such type of cell distinction mechanism.”

The CDgB is able to selectively target the cell membranes of B lymphocytes over T lymphocytes or NK cells. The researchers sought to optimize the selectivity of the CDgB by testing different derivatives of the molecules with various hydrocarbon chain lengths from 4 to 20 carbons. It was found that the CDgB derivatives with 14 to 18 carbons showed the highest selectivity towards the B lymphocytes, with C18 showing the best results. It became more difficult to distinguish the cells through fluorescence when the carbon length was increased beyond 20. The fact that carbon length matters in the selectivity hinted that the mechanism was dependent on the difference in the membrane structures between B and T lymphocytes.

The researchers furthermore concluded that this new lipid oriented live cell distinction (LOLD) mechanism can supplement the existing cell distinction mechanism to improve our ability to distinguish specific cell types from complicated mixtures of different cells. This research was published in the Journal of the American Chemical Society.