A new flexible thermoelectric device can wrap around pipes and other hot surfaces and convert wasted heat into electricity.

Researchers in Penn State’s College of Agricultural Sciences will use a newly awarded $1.5 million grant from the U.S. Department of Agriculture to work with 13 other land-grant universities in the eastern U.S. to create an education program that would help private forests owners adapt to and mitigate climate change. 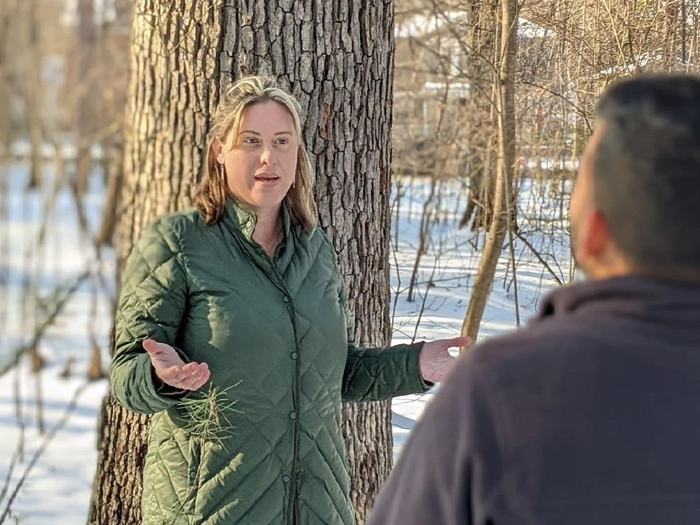 Researchers in Penn State’s College of Agricultural Sciences will use a newly awarded $1.5 million grant from the U.S. Department of Agriculture to work with 13 other land-grant universities in the eastern U.S. to create an education program that would help private forests owners adapt to and mitigate climate change.

The funding comes from the USDA’s National Institute of Food and Agriculture through its Agriculture and Food Research Initiative, the nation’s leading competitive grants program for agricultural sciences. The award is aimed at preparing forest owners to take advantage of carbon market opportunities and prepare the forestry extension workforce to better serve their clients in forest carbon and climate issues.

Forests are the lowest-cost climate-change solution available, according to Melissa Kreye, assistant professor of forest resource management, who leads the research team. U.S. forests comprise more than 90% of the land sector’s carbon sequestration potential and offset up to 20% of total U.S. fossil fuel emissions. But forests also are vulnerable to the impacts of climate change due to increased risks from weather, pests, fire and other climate-driven disturbances.

“Those factors could reduce forests’ effectiveness in climate-change mitigation,” she said. “Despite very promising developments in policy, in the carbon market and in technology, forest landowner interest and participation in carbon-offset projects remains a major, unresolved bottleneck requiring much-needed change.”

The Penn State-led program is intended to address that critical bottleneck using an integrated, stakeholder-driven approach to developing and expanding extension activities that lead to increased inclusivity in the adoption of practical solutions and durable change, Kreye explained.

The project will address USDA’s priority area, “Agriculture Economics and Rural Communities,” she noted. The proposed work focuses on the eastern U.S., home to 82% of the country’s private forests. The future of forests and climate strongly depends on engaging forest owners in science-based climate-change solutions, Kreye pointed out.

“The scale and scope of this problem aligns very well with the Cooperative Extension System’s capacity, and the rapidly evolving nature of the topic is driving the need for new knowledge and program creation,” she said. “It is also driving the need for additional coordination among universities, federal and state agencies such as the USDA Climate Hubs, extension, and stakeholders to help make solutions actionable.”

The overarching goal of this project is to dramatically increase the involvement of private forest owners in climate-change solutions and advance a more inclusive carbon economy, according to Kreye, who called the objective “aggressive but achievable.” She explained that her team aims to achieve it by developing informative and widely accessible materials and programs that help forest owners make informed decisions about rapidly evolving carbon incentive programs and markets and managing forests under climate change in key regions.

To increase the quality and diversity of climate-change-related content in extension programming, Kreye plans to leverage existing networks among extension and outreach professionals in the universities and state and federal agencies, and partner with conservation and industry groups to provide professional-development training to extension professionals.

Also leading the research team is extension educator Calvin Norman, co-founder of the Carbon Markets 101 pilot project, to be rolled out in the research.

Penn State’s grant is one of six such awards given to universities around the country.

“These projects will work toward net-zero emissions in agriculture, working lands and communities adapted to climate change, [as well as] training a diverse workforce that can communicate and incorporate climate considerations into management and climate justice that is appropriate for unique U.S. agronomic conditions,” said Carrie Castille, director of the National Institute of Food and Agriculture.