A new approach to calm that angry nose 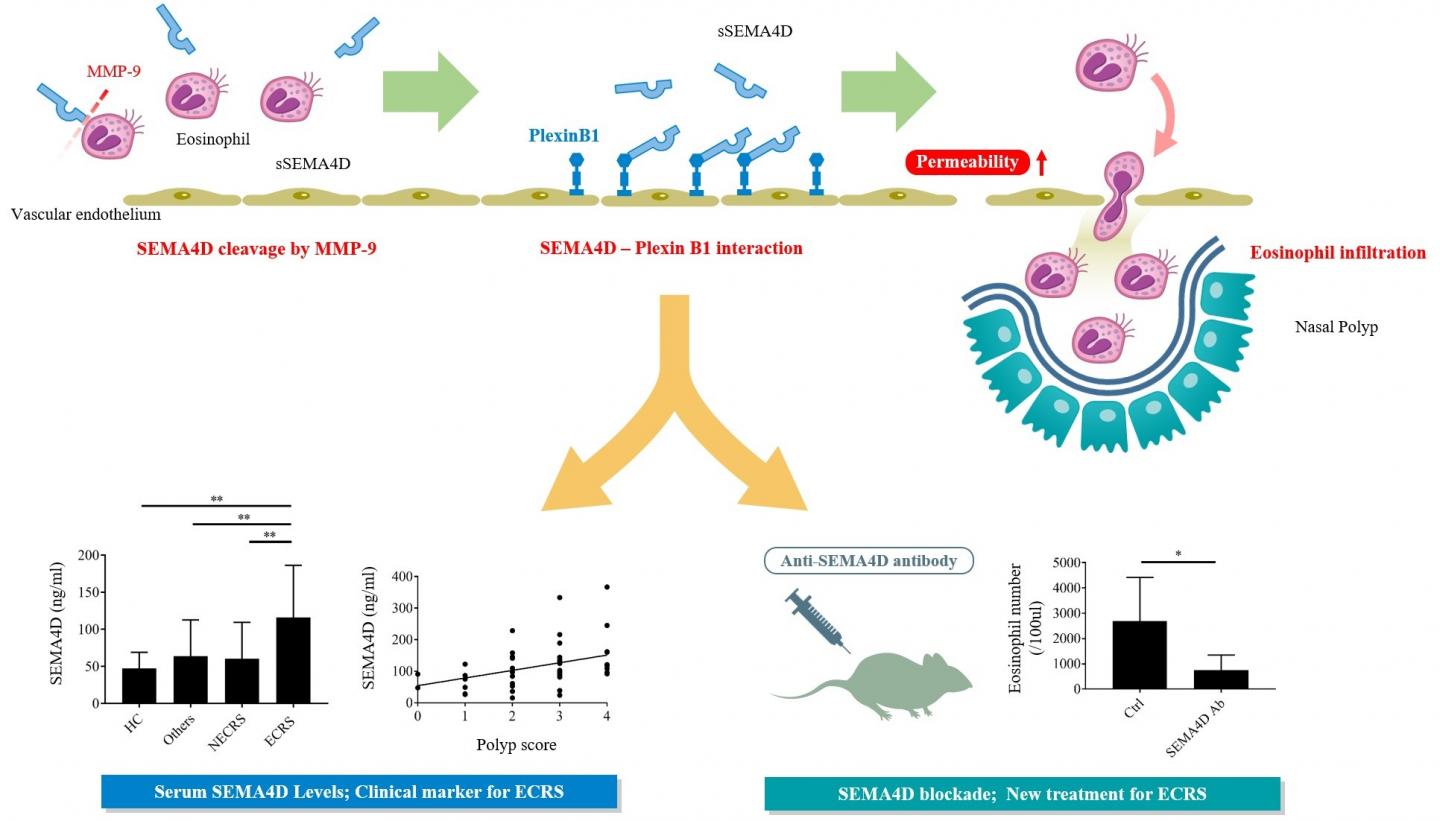 Osaka, Japan – Eosinophilic chronic rhinosinusitis (ECRS) is a type of airway disease involving nasal inflammation. Many studies have attempted to understand the molecular-based pathogenesis of recurrent ECRS; none have provided a clear explanation, until now.

In a new study published in The Journal of Allergy and Clinical Immunology, a team led by researchers from Osaka University investigated the activity of semaphorin protein, a cell-surface molecule that participates in nervous system signaling and immune responses. They found that semaphorin protein contributes to allergic reactions and development of nasal polyps in patients with ECRS.

In ECRS, inflammation leads to development of nasal polyps containing eosinophils (a subset of white blood cells). Treatment options include sinus surgery and systemic glucocorticoids. However, the effectiveness of these treatments can be insufficient and multiple side effects can occur. Thus, targeted molecular therapies may provide novel treatment options for patients with ECRS without these drawbacks. Because semaphorin has been identified in inflamed airway tissues, it is an attractive candidate for use in such therapies.

“In this study, we found that serum levels of semaphorin proteins were elevated in patients with ECRS, and that these levels were positively associated with multiple measures of disease severity,” says Masayuki Nishide, corresponding author on the study. “We suspected that semaphorin protein played an important role in the pathogenesis of ECRS.”

The Osaka University team found that activated eosinophils expressed high levels of semaphorin protein on the cell surface, which could be released into the surrounding environment through an enzymatic reaction. This soluble form of semaphorin protein could enable eosinophils to pass through endothelial cell lining, resulting in the onset of inflammation and formation of nasal polyps.

The article, “Pathological and therapeutic implications of eosinophil-derived semaphorin 4D in eosinophilic chronic rhinosinusitis,” was published in The Journal of Allergy and Clinical Immunology at DOI: https://doi.org/10.1016/j.jaci.2019.12.893.

A gold butterfly can make its own semiconductor skin

Active pharmaceutical ingredients can persist in the environment