A natural protection racket among damselfish and mysid shrimp 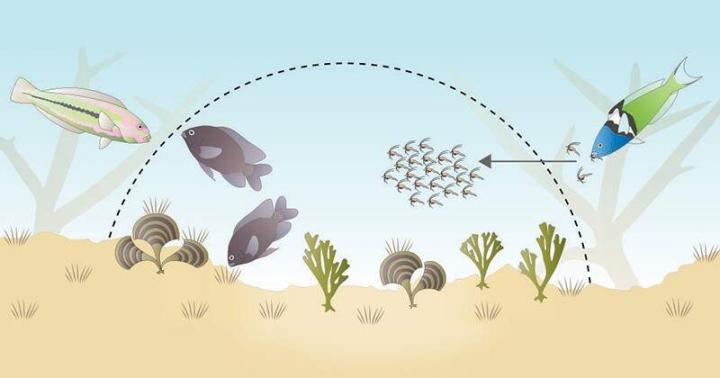 Throughout nature, there are instances of animals aiding one another and living together in mutually beneficial relationships that have helped shape the world’s landscapes and biodiversity.

These domesticator-domesticate relationships form when one species provides multigenerational support to another species in exchange for a resource or service that benefits both species. An example of this type of relationship is how early humans domesticated gray wolves. The wolves were attracted to the human encampments, which provided them with protection and resources, and the wolves, in turn, helped the humans increase their hunting proficiency.

One area of the world where these mutually beneficial relationships could be examined further, however, is underwater.

A new study involving researchers from the University of Delaware looked at how a mutually beneficial relationship formed in the waters of Belize. Researchers discovered that longfin damselfish aggressively defend algal farms on which they feed, which provides a protective refuge for planktonic mysid shrimps, which in turn excrete nutrients onto the farms, enriching the algae on which the damselfish feed.

The paper was recently published in Nature Communications. Rohan Brooker, a former post-doctoral researcher at UD, served as the lead author and Danielle Dixson, associate professor in University of Delaware’s School of Marine Science and Policy in the College of Earth, Ocean and Environment, served as one of the co-authors on the study.

The research was conducted in the field on the shallow reef habitat surrounding the Smithsonian’s Carrie Bow Cay Research Station in Belize from January through April of 2018, however the idea and initial data was conducted when Brooker was a post-doctoral researcher in Dixson’s lab and continued through his post-doctoral position at the University of Saskatchewan, Canada.

Dixson said that longfin damselfish are known to aggressively defend the algal farms that they consider to be their turf, and while they aren’t a very big fish, they are tenaciously territorial.

“They will come after you if you go into their territory,” said Dixson. “They’ll try and bite you, and they’ll try to scare everything away. They’re really aggressive even though they’re not very big. So they create this bubble that they protect, and one of the things that they don’t bother chasing off are these mysids.”

To determine the effect of mysids on longfin damselfish body condition, the researchers looked at the hepatosomatic index (HSI), which can reflect the health or stored energy of a fish’s liver and can indicate the relationship between the diet and physical condition of the damselfish. They compared the HSI of the fish who lived with the mysids to those who lived without the mysids and found that those fish living with the mysids had a higher HSI than those who had no mysids on their alga farms.

This could be for several reasons. For instance, within the mysid-associated farms, the algal composition was significantly different than those farms without mysids. Mysid-associated farms contained a significantly higher proportion of brown algae, which increases the structural complexity of damselfish farms and can serve as a catalyst for the growth of palatable turf-algae, the preferred food source for the damselfish.

Dixson said that it was interesting to see this relationship form in a natural environment and could lead to more studies looking at domesticator-domesticate relationships in the wild.

“We know that domesticator-domesticate relationships happen in nature,” said Dixson. “But this is the first example we have found of this type of relationship underwater. Maybe this paper could spark other people to examine different commensal pathways or mutualistic behaviors that we see as potentially being something similar to this.”