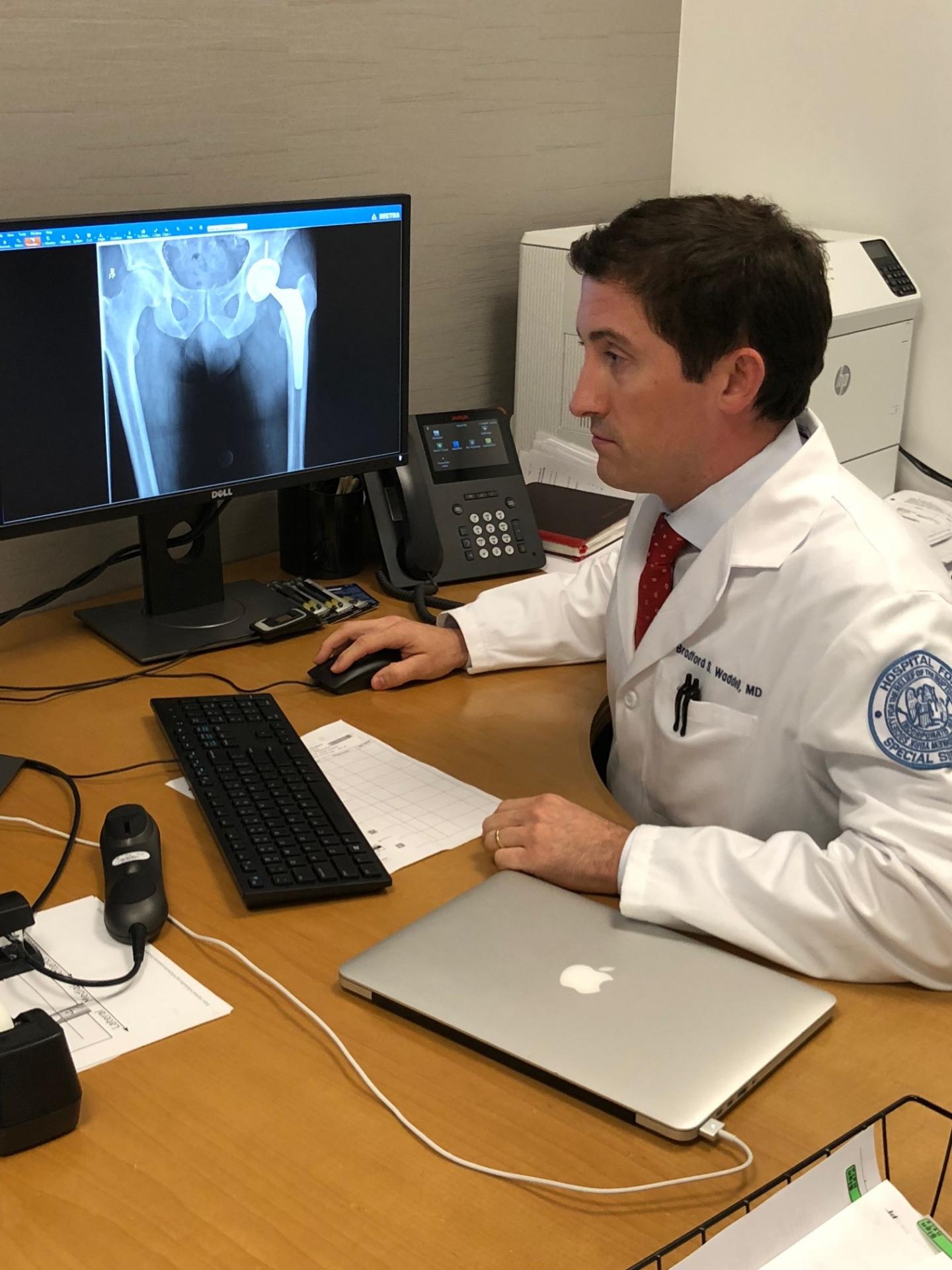 Patients who live close to the hospital at which they have undergone total hip or total knee replacement are much more likely to visit the emergency room for follow-up care of pain, inflammation and other complaints than those who live farther away, according to a new study by researchers at Hospital for Special Surgery (HSS) in New York City and The Ochsner Clinic in New Orleans. On the other hand, patients who live far from the hospital are much more likely to call their surgeon with questions–a more efficient use of health care resources.

“Intuition would say that they came to the ER because it’s available,” said Bradford Waddell, MD, a hip and knee surgeon at HSS, who led the study. “Everybody is hurting after knee and hip surgery, but if you have easy access to the ER you’re just going to pop on in.”

The impetus for the research was a relatively recent change in the demographics of surgery. A growing number of patients who require specialty procedures, such as knee and hip replacements, are referred by their local physicians to centers of excellence far from where they live. The result is that they may travel hundreds of miles for an operation but be unable conveniently to seek follow-up care at the same institution. Dr. Waddell and colleagues set out to evaluate how these patients were following up and communicating with the surgeon after their procedure.

As Dr. Waddell and his colleagues found by reviewing medical records that included addresses, these patients are far less likely to show up at the hospital where they underwent their joint procedures than those who live in the general area. Instead, they turned to the telephone, calling in with questions and, if necessary, scheduling appointments to come see their surgeons–which is ideal, he said. “They should be calling us and coming to the clinic. We should try to avoid them showing up to the ER, which can be very expensive,” Dr. Waddell said.

The findings point to a need for better communication with patients who undergo orthopedic surgeries, Dr. Waddell said. Surgeons should emphasize that pain and swelling after these operations are normal and rarely require urgent care. “They should be calling us and coming to the clinic rather than using the ER,” he said.

The HSS researchers presented their findings at AAOS 2019, the annual meeting of the American Academy of Orthopaedic Surgeons.

About HSS | Hospital for Special Surgery

HSS is the world’s leading academic medical center focused on musculoskeletal health. At its core is Hospital for Special Surgery, nationally ranked No. 1 in orthopedics (for the ninth consecutive year) and No. 3 in rheumatology by U.S.News & World Report (2018-2019). Founded in 1863, the Hospital has one of the lowest infection rates in the country and was the first in New York State to receive Magnet Recognition for Excellence in Nursing Service from the American Nurses Credentialing Center four consecutive times. The global standard total knee replacement was developed at HSS in 1969. An affiliate of Weill Cornell Medical College, HSS has a main campus in New York City and facilities in New Jersey, Connecticut and in the Long Island and Westchester County regions of New York State. In addition, HSS will be opening a new facility in Florida in late 2019. In 2018, HSS provided care to 139,000 patients and performed more than 32,000 surgical procedures, and people from all 50 U.S. states and 80 countries travelled to receive care at HSS. In addition to patient care, HSS leads the field in research, innovation and education. The HSS Research Institute comprises 20 laboratories and 300 staff members focused on leading the advancement of musculoskeletal health through prevention of degeneration, tissue repair and tissue regeneration. The HSS Global Innovation Institute was formed in 2016 to realize the potential of new drugs, therapeutics and devices. The HSS Education Institute is the world’s leading provider of education on musculoskeletal health, with its online learning platform offering more than 600 courses to more than 21,000 medical professional members worldwide. Through HSS Global Ventures, the institution is collaborating with medical centers and other organizations to advance the quality and value of musculoskeletal care and to make world-class HSS care more widely accessible nationally and internationally.

Scienmag Apr 5, 2019
Study by the University of Bonn shows how the effectiveness of the National Forest Conservation Program could be…