A history of African dust 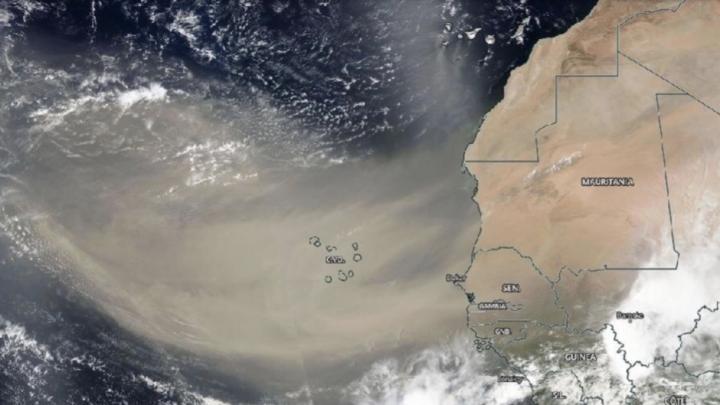 In a recently published paper, a research team, led by University of Miami (UM) Rosenstiel School of Marine and Atmospheric Science Professor Emeritus Joseph M. Prospero, chronicles the history of African dust transport, including three independent “first” discoveries of African dust in the Caribbean Basin in the 1950s and 1960s.

Every year, mineral-rich dust from North Africa’s Sahara Desert is lifted into the atmosphere by winds and carried on a 5,000-mile journey across the North Atlantic to the Americas. African dust contains iron, phosphorus and other important nutrients that are essential for life in marine and terrestrial ecosystems, including the Amazon Basin. Wind-borne mineral dust also plays an important role in climate by modulating solar radiation and cloud properties.

The researchers also discuss the discovery in the 1970s and 1980s of the link between dust transport and African climate following an increase in dust transport to the Caribbean due to the onset of severe drought in the Sahel. Much of today’s dust research is focused on North Africa as it is Earth’s largest and most persistent source of dust.

Today, Prospero, nicknamed the “father of dust,” is using a system of ground stations and satellites to study the effect that the global transport from the Sahara has on the atmospheric composition above the Caribbean.

The study, titled “The Discovery of African Dust Transport to the Western Hemisphere and the Saharan Air Layer,” was published in Bulletin of the American Meteorological Society. The study’s co-authors include: Anthony C. Delany and Audrey C. Delany of Eldorado Springs, Colorado; and Toby N. Carlson from Pennsylvania State University.