A good media reputation can save your job, reveals new study from Renmin University of China

In a democratic system, the media plays a significant role in molding political and administrative organizations. The decisions of legislative bodies, politicians, bureaucrats, and other stakeholders can be significantly influenced by the preferences and agendas set by the media. This might cause agencies to change their structures, processes, and rules and also delay or accelerate policy-making in line with popular media opinion. 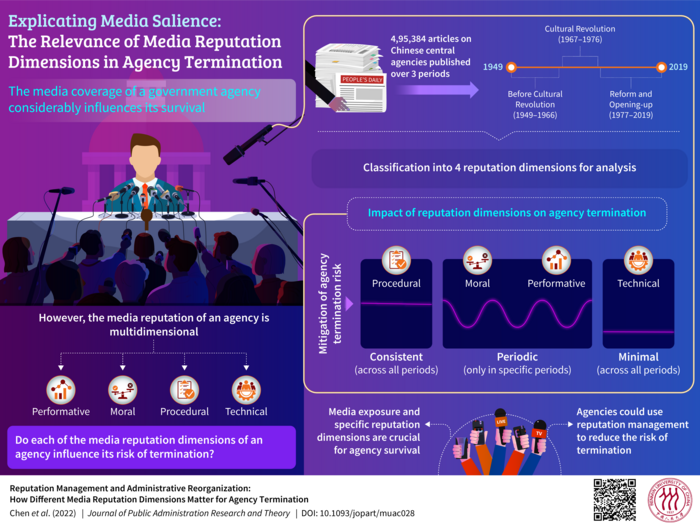 In a democratic system, the media plays a significant role in molding political and administrative organizations. The decisions of legislative bodies, politicians, bureaucrats, and other stakeholders can be significantly influenced by the preferences and agendas set by the media. This might cause agencies to change their structures, processes, and rules and also delay or accelerate policy-making in line with popular media opinion.

Similarly, the ability of organizations to garner media attention determines their legitimacy and survival. Studies have revealed that during public sector reforms, agencies with strong media salience among core voters had a high survival rate, highlighting the impact of the media on the survival of different government agencies. According to a seminal 2010 study by Carpenter, the reputation of an organization is divided into four distinct dimensions—performative, technical, moral, and procedural. Yet, few studies have explored how these dimensions are affected by the media and how that, in turn, determines the survival or termination of the organization.

In a recent study, a group of researchers led by Professor Liang Ma of the Renmin University of China decided to address these questions in the context of China. “To our knowledge, no quantitative studies have outlined the different types of organizational reputation in the context of media salience and agency termination. Answering these questions is important as it can help agencies learn about how reputation works in agency termination and implement necessary actions to mitigate the risk of termination,” explains Prof. Ma. Their findings were made available online on 2 June 2022 in the Journal of Public Administration Research and Theory.

To this end, the team employed machine learning techniques to classify a whopping 4,95,384 agency-related articles published between 1949 and 2019 in the People’s Daily (PD), the official newspaper of the Chinese Communist Party Central Committee, under the four aforementioned reputation types.

While selecting a media outlet like People’s Daily, which rarely publishes any negative news regarding government agencies, a question naturally arises: can PD be considered an accurate and reliable tool to measure agency reputation? The researchers provide two reasons to keep this concern at bay. Firstly, studies have pointed out that media coverage, despite its tone and sentiment, is vital for the agency survival. Secondly, neutral communication also helps in setting different reputation dimensions, as different reputation dimensions may attract different audiences.

The team performed event history analyses on the news reports and found that media coverage reduced the risk of agency termination. Media coverage was important for the survival of administrative agencies as the study demonstrated that the total number of media stories adversely affected the probability of agency closure.

But this result wasn’t constant across all dimensions. The team discovered that only the procedural dimension consistently reduced the risk of termination. While the performative and moral dimensions were significantly and negatively related to termination in a particular time-period; the technical dimension only slightly increased the likelihood of agency survival during mass reorganizations.

“This study is the first empirical research documenting the changing dynamics of reputation management of central agencies in China. We also established the link between reputation symbols and agency termination,” concludes Prof. Ma.