DNA variants passed on to modern humans from Neanderthals can increase as well as decrease our ability to fight SARS-CoV-2, a new PNAS study finds. 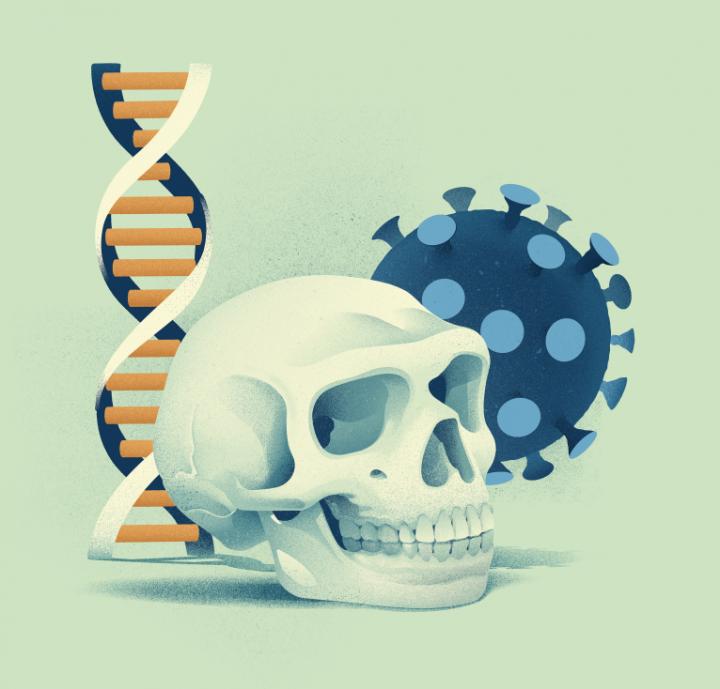 SARS-CoV-2, the virus that causes COVID-19, impacts people in different ways after infection. Some experience only mild or no symptoms at all while others become sick enough to require hospitalization and may develop respiratory failure and die.

Now, researchers at the Okinawa Institute of Science and Technology Graduate University (OIST) in Japan and the Max Planck Institute for Evolutionary Biology in Germany have found that a group of genes that reduces the risk of a person becoming seriously ill with COVID-19 by around 20% is inherited from Neanderthals.

“Of course, other factors such as advanced age or underlying conditions such as diabetes have a significant impact on how ill an infected individual may become,” said Professor Svante Pääbo, who leads the Human Evolutionary Genomics Unit at OIST. “But genetic factors also play an important role and some of these have been contributed to present-day people by Neanderthals.”

Last year, Professor Svante Pääbo and his colleague Professor Hugo Zeberg reported in Nature that the greatest genetic risk factor so far identified, doubling the risk to develop severe COVID-19 when infected by the virus, had been inherited from Neanderthals.

Their latest research builds on a new study, published in December last year from the Genetics of Mortality in Critical Care (GenOMICC) consortium in the UK, which collected genome sequences of 2,244 people who developed severe COVID-19. This UK study pinpointed additional genetic regions on four chromosomes that impact how individuals respond to the virus.

Now, in a study published today in PNAS, Professor Pääbo and Professor Zeberg show that one of the newly identified regions carries a variant that is almost identical to those found in three Neanderthals – a ~50,000-year-old Neanderthal from Croatia, and two Neanderthals, one around 70,000 years old and the other around 120,000 years old, from Southern Siberia.

Surprisingly, this second genetic factor influences COVID-19 outcomes in the opposite direction to the first genetic factor, providing protection rather than increasing the risk to develop severe COVID-19. The variant is located on chromosome 12 and reduces the risk that an individual will require intensive care after infection by about 22%.

“It’s quite amazing that despite Neanderthals becoming extinct around 40,000 years ago, their immune system still influences us in both positive and negative ways today,” said Professor Pääbo.

To try to understand how this variant affects COVID-19 outcomes, the research team took a closer look at the genes located in this region. They found that three genes in this region, called OAS, code for enzymes that are produced upon viral infection and in turn activate other enzymes that degrade viral genomes in infected cells.

“It seems that the enzymes encoded by the Neanderthal variant are more efficient, reducing the chance of severe consequences to SARS-CoV-2 infections,” Professor Pääbo explained.

The researchers also studied how the newly discovered Neanderthal-like genetic variants changed in frequency after ending up in modern humans some 60,000 years ago.

To do this, they used genomic information retrieved by different research groups from thousands of human skeletons of varying ages.

They found that the variant increased in frequency after the last Ice Age and then increased in frequency again during the past millennium. As a result, today it occurs in about half of people living outside Africa and in around 30% of people in Japan. In contrast, the researchers previously found that the major risk variant inherited from Neanderthals is almost absent in Japan.

“The rise in the frequency of this protective Neanderthal variant suggests that it may have been beneficial also in the past, maybe during other disease outbreaks caused by RNA viruses,” said Professor Pääbo.