A genetic chaperone for healthy aging? 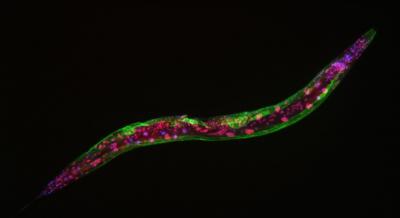 Researchers at the Max Delbrueck Center for Molecular Medicine (MDC) have identified an epigenetic mechanism that appears to strongly influence healthy aging. It’s a protein that controls muscle integrity, lifespan and levels of an essential sugar. How does one protein have that much power?

Researchers at MDC’s Berlin Institute for Medical Systems Biology (BIMSB) have found a protein that has a significant impact on healthy muscles and lifespan. Animals lacking this protein, called LIN-53, have severe muscle defects, limited motility, and die early compared to animals with the protein.

Dr. Baris Tursun, who leads BIMSB’s Gene Regulation and Cell Fate Decision Lab, and his collaborators figured out two specific ways LIN-53 works in roundworms. Their findings, reported in the journal Aging Cell, lay the groundwork for further studies on the human version of the protein.

“Identifying the genetic factors that play a role in linking lifespan and healthspan is key for understanding human health and aging-related diseases such as muscular dystrophy,” Tursun said.

LIN-53 is not just any protein, it is a “histone chaperone,” binding to the molecules called histones that long DNA strands tightly wrap around to fit in the cell nucleus. Histone modifications can ultimately turn gene expression levels up or down, affecting an organism’s development, function and lifespan. LIN-53 is considered an “epigenetic factor” because by interacting with histones, it can help activate and deactivate genes that can result in heritable traits passed to offspring, but without changing the underlying DNA sequence.

“Usually when we age, we experience aging symptoms accompanied by muscle loss,” Tursun said. “Is this all coincidence or is it linked, and if so, how it is linked? Our paper is one of the first to show an epigenetic link.”

The team of molecular biologists and geneticists investigated LIN-53’s role in Caenorhabditis elegans (C. elegans), a worm only 1 millimeter long. Also referred to as a nematode, it is one of the primary model organisms used in aging research because many of its genes are highly conserved, or found, across species.

“It is such a small organism and yet still resembles human tissues, pathways and gene regulation, so we are able to transfer results from the nematode to humans,” said Stefanie Müthel, first author of the paper and a postdoctoral researcher at the Myology Lab at the Experimental and Clinical Research Center (ECRC), a joint institution of Charité and the MDC.

When the researchers knocked out the gene for LIN-53, the worms showed reduced ability to move and did not live as long as counterparts with the gene.

This clearly indicated LIN-53 plays role in healthy muscles and lifespan. The team dug further and determined LIN-53 affects muscle development through the molecular complex NuRD, while it affects lifespan through a separate complex, Sin3. The fact that these are distinct pathways, but both involving LIN-53, is particularly intriguing and strongly suggests the importance of LIN-53 as a link between healthspan and lifespan.

“LIN-53 is part of seven different molecular complexes regulating chromatin modification and structure,” Müthel said. “I was surprised and excited that we were able to clearly define the complexes important for healthspan and lifespan.”

Additional analysis revealed a possible explanation for why LIN-53 is so powerful. Animals without LIN-53 had very low levels of a sugar, called trehalose; it consists of two glucose molecules is known to be essential for normal lifespan in invertebrates. The interaction between LIN-53 and Sin3 affected genes that regulate metabolism, including the production of this sugar. Further research is needed to understand exactly how LIN-53 interacts with both NuRD and Sin3, and inhibits sugar production.

Since the LIN-53 protein is very similar to human protein RBBP4/7, researchers can use insights gained from the microscopic worms to guide where to look for answers to similar questions in humans.

“We all want to age in a healthy manner,” Tursun said. “Once we understand the links between aging and all the accompanying detrimental effects, then we can begin to think about how to unlink them.” (pet)

Head of the Lab “Gene Regulation and Cell Fate Decision in C. elegans” at the Berlin Institute of Medical Systems Biology (BIMSB)

The Max Delbrück Center for Molecular Medicine in the Helmholtz Association (MDC) was founded in Berlin in 1992. It is named for the German-American physicist Max Delbrück, who was awarded the 1969 Nobel Prize in Physiology and Medicine. The MDC’s mission is to study molecular mechanisms in order to understand the origins of disease and thus be able to diagnose, prevent, and fight it better and more effectively. In these efforts the MDC cooperates with the Charité – Universitätsmedizin Berlin and the Berlin Institute of Health (BIH) as well as with national partners such as the German Center for Cardiovascular Research and numerous international research institutions. More than 1,600 staff and guests from nearly 60 countries work at the MDC, just under 1,300 of them in scientific research. The MDC is funded by the German Federal Ministry of Education and Research (90 percent) and the State of Berlin (10 percent), and is a member of the Helmholtz Association of German Research Centers. http://www.mdc-berlin.de

Conservative treatment with a sling can replace surgery for shoulder fractures

Green turtles eat plastic that looks like their food

Improving cardiovascular health of the most vulnerable

Scienmag Jan 21, 2020
Heart disease and stroke are major causes of pre-mature mortality and morbidity in North Carolina, and there are…

Evidence for link between ‘leaky gut’ and autoantibody…

Study shows dogs can accurately sniff out cancer in blood