The novel design for a next-generation diamond sensor with capabilities that range from producing magnetic resonance imaging (MRI) of single molecules to detecting slight anomalies in the Earth’s magnetic field to guide aircraft that lack access to global positioning systems (GPS) will be developed by a collaboration of scientists led by the U.S. Department of Energy’s (DOE) Princeton Plasma Physics Laboratory (PPPL). 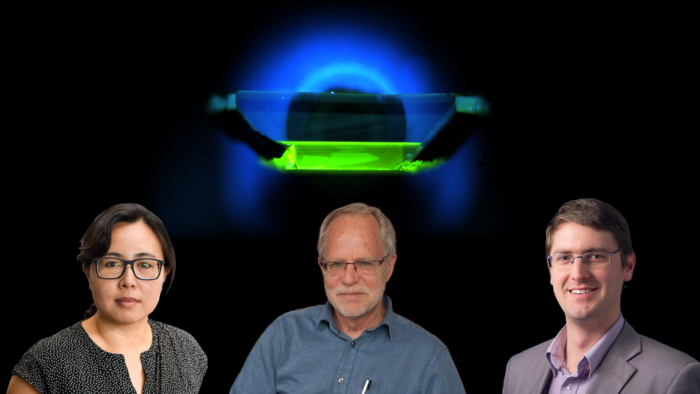 The novel design for a next-generation diamond sensor with capabilities that range from producing magnetic resonance imaging (MRI) of single molecules to detecting slight anomalies in the Earth’s magnetic field to guide aircraft that lack access to global positioning systems (GPS) will be developed by a collaboration of scientists led by the U.S. Department of Energy’s (DOE) Princeton Plasma Physics Laboratory (PPPL).

The award was one of 10 critically reviewed DOE microelectronic grants for national laboratories. “Microelectronics are the key to the technologies of tomorrow,” said Secretary of Energy Jennifer M. Granholm, “and with DOE’s world-class scientists leading the charge, they can help bring our clean energy future to life and put America a step ahead of our economic competitors.”

The award brings PPPL, traditionally a fusion-focused research lab, fully into the often-bizarre world of quantum physics. “This is the start of a whole new activity for the laboratory that will make us leaders in the use of  plasma  to make diamond to improve sensors,” said Steve Cowley, PPPL director. “It is also a marvelous example of how the laboratory, under David Graves’s leadership, is collaborating with Princeton University and Professor Nathalie de Leon and physicist Alastair Stacey in Melbourne.”

Creation of diamond sensors calls for the synthesis of designer diamond material that begins with a diamond seed that is built up through the gradual deposition of plasma-enhanced vapor. The trick is to replace carbon atoms of the growing material with nitrogen atoms and vacant spaces — a combination referred to as NV centers in diamonds. This combination creates the sensor and is commonly called a color center since it glows red when a light shines on it.

The tricky materials design requires the exquisitely careful doping, or implantation, of nitrogen atoms together with the creation of vacant spaces in the color center. The doping is done with microwave reactors that produce the plasma-enhanced vapors that enlarge the diamond. These reactors are in some ways similar to the microwave ovens used in homes but are modified to enable them to ignite plasmas. “Such reactors are very touchy and peculiar,” Graves said. “You have to do the process just right to get the doping to work.”=

The PPPL venture will follow the pathway suggested by Stacey of Australia’s RMIT, who explained that increasing the number of color centers addressed at a time will make the sensor more sensitive. However, he said, the traditional method of doing this by increasing the density of the centers creates defects in the diamond that degrade the color center properties and thus limit the sensor improvement. To avoid that problem, he proposed adding the innovative step of co-doping the diamond with phosphorus plasma to increase the density without electrical interference.

The plasma must be carefully controlled to successfully incorporate both dopants and that requires significant advances in plasma physics and chemistry.  Key plasma researchers include PPPL physicists Yevgeny Raitses and Igor Kaganovich, leaders of PPPL’s Laboratory for Plasma Nanosynthesis, who will examine plasma used in the synthesis of diamond sensors. Plasma, the fourth state of matter that makes up 99 percent of the visible universe, consists of free electrons and atomic nuclei, or ions.

Kaganovich and his team will model the room-temperature plasmas and perform quantum-chemistry calculations of diamond growth, while Raitses will use state-of-the-art diagnostics to measure the chemical species, or substances, in the plasma. The plasma studies will help guide the choice of synthesis conditions. The low-temperature, or cold, plasmas studied compare with the million-degree fusion plasmas that have been the hallmark of PPPL research.

“The basic idea is to combine plasma science with modeling the surface chemistry of the plasma and doing experiments to grow the diamond,” Graves said. “We also want to understand the science behind how you build and operate a plasma reactor to give you this highly specialized and defect-free material for useful quantum sensors.”

The plan calls for buying two commercial reactors to co-dope the diamond at PPPL: one for light phosphorous doping and one for heavy phosphorous doping.  The combination will enable a range of doping concentrations, Graves said.

The development process will bring all collaborators together. The group headed by Princeton’s de Leon will lead measurements that include what are called the coherence properties of the diamond’s color centers. Such properties refer to the length of time that electrons in the color center spin in quantum superposition, or simultaneously up and down, to activate the sensor.

“Having a tight collaboration between diamond synthesis, plasma modeling, and quantum measurement will enable a new frontier in quantum sensors,” de Leon said. “These research areas are typically completely separate research communities, and I am excited about what we can achieve together.”

Meanwhile, Stacey will lead measurements of the doping characteristics and growth of the diamond crystal, beginning with the seed. “The seed is a piece of existing high-purity single= crystal diamond,” Stacey said. “We often only add a tiny bit of new diamond, just as a new layer on the surface, but this new layer has precisely engineered properties [such as doping agents and increased densities] which the original seed did not have.”

Graves notes the significance of the project for PPPL. “This is a big step,” he said. “It’s our first competitive [quantum] proposal. It’s a pretty big deal for PPPL to get a grant in an area like this that is so different from our traditional research, and I think symbolically it’s important.”

PPPL, on Princeton University’s Forrestal Campus in Plainsboro, N.J., is devoted to creating new knowledge about the physics of plasmas — ultra-hot, charged gases — and to developing practical solutions for the creation of fusion energy. The Laboratory is managed by the University for the U.S. Department of Energy’s Office of Science, which is the single largest supporter of basic research in the physical sciences in the United States and is working to address some of the most pressing challenges of our time. For more information, visit energy.gov/science(link is external).