A gel for dosage compensation 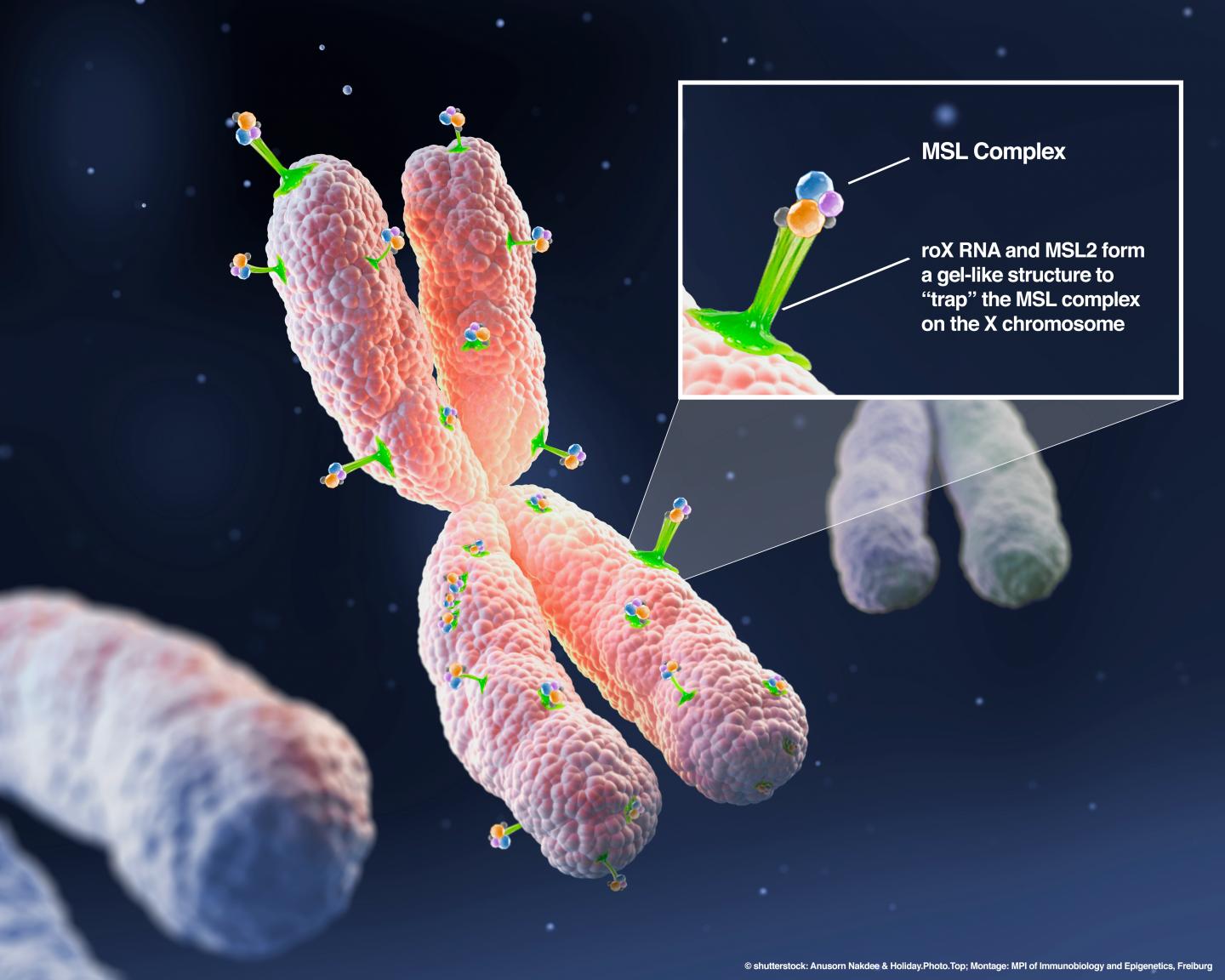 Human females have two X chromosomes, and males only one. This chromosome imbalance also extends to other branches of the animal kingdom. Interestingly, the humble fruit fly has devised a different way to “equalize” these differences. Whereas human and mouse females shut down one of their X chromosomes, in fruit flies it instead the male doing the work. An epigenetic factor known as the MSL complex binds to the single male X chromosome and uses its histone acetylation function to hyperactivate the X to try to reach RNA production levels equivalent to those achieved by the two X chromosomes carried by females. If this process fails, male flies die.

“One aspect that had always baffled researchers is how the MSL complex knows which of the 8 chromosomes carried by every fly cell is the X,” explains Asifa Akhtar, Director at the MPI of Immunobiology and Epigenetics in Freiburg. This question motivated researchers in her team to design a novel and elaborate strategy to dissect how the MSL complex could identify the X. Instead of studying the fly MSL complex in its “native habitat”, the researchers decided to transplant the complex into a totally foreign environment – a mouse cell.

The researchers decided to go back to basics and reverse engineer the mechanism of recognizing the X chromosome one component at a time. They started by expressing a single protein from the fly MSL complex, MSL2, in mice. At this point, they could not see anything happening. Based on previous work in flies, they hypothesized that another MSL complex component, the roX1 and roX2 long noncoding RNAs, might also be required. They, therefore, decided to throw one of these RNAs into the pot. After providing mouse cells with fly MSL2 and roX2 RNA, the researchers now observed distinct nuclear foci marked by roX2.

Furthermore, the condensation of MSL2 and roX2 at these foci appeared to upregulate the expression of genes. The discrete nature and activation potential of these foci are strongly reminiscent of the X-chromosomal territories marked by the MSL complex in the “native” situation of the male fly. Fascinatingly, these experiments indicate that supplementing mouse cells with fly MSL2 and roX2 appears to be sufficient to recreate a mini fly X chromosome in mouse cells. This innovative approach thereby illuminated the minimal molecular components required for the first steps in recognition and activation of the fly X chromosome by the MSL complex.

Now that the team had figured out the exact recipe for forming a mini fly X chromosome, they combined the two ingredients, roX RNA and MSL2, together in a test tube. They noted that these components took on a unique state. “When we mixed MSL2 and the roX RNA, we noticed something interesting. Both components – although they were liquid in isolation – started to form spherical particles and transitioned into a different phase that looked like a gel,” says Claudia Keller-Valsecchi, co-first author of the study. Interestingly, both roX1 and roX2 RNAs are encoded by genes located on the X chromosome.

The team speculated about a model where roX RNAs synthesized from the X chromosome induce the nearby “trapping” of MSL2 via their interaction and propensity to assemble into a gel-like state. “Levels of roX RNAs are predictive of how well the MSL complex is able to find the X chromosome. The more roX is synthesized from the X, the better the complex can distinguish the X from autosomes,” added co-first author of the work Felicia Basilicata. On the other hand, other chromosomes do not produce the roX RNAs, and therefore have little chance of efficiently trapping the MSL complex in their vicinities.

With their results, the team uncovered a new mechanism utilized by male flies to distinguish and mark the single X chromosome based on the assembly of a two-component roX-MSL2 gel. Male flies that fail to assemble this gel will die. “It is possible that the gel state also helps attract and trap other important components for dosage compensation, such as the transcription machinery required for increased RNA production,” Asifa Akhtar explains future research questions.